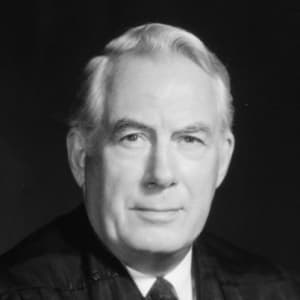 In 1969, President Richard Nixon named Warren Burger chief justice of the Supreme Court. He didn't fulfill Nixon's desire to reverse Warren Court decisions (1953-1969). Burger's court upheld the 1966 Miranda decision, and Burger voted with the majority in the court's landmark 1973 decision, Roe v. Wade, establishing women's constitutional right to have abortions. He was awarded the Presidential Medal of Freedom in 1988.

Growing Up in a Working-Class Family

Warren Earl Burger was the fourth of seven children born to a struggling St. Paul, Minnesota, working-class family. His father, Charles Joseph Burger, was a cargo inspector for the railroad and a traveling salesman. His mother, Katherine (Schnittger), was a homemaker. By the age of 9, young Warren was delivering newspapers to help with family finances. He was president of his school's student council and competed in hockey, football, track and swimming. Before graduating in 1925, he wrote articles on high school sports for the local newspaper.

After high school, Warren Burger worked for an insurance company while taking night classes at the University of Minnesota. He then attended St. Paul College of Law (now William Mitchell College), graduating with honors in 1931. From there, he joined a prominent St. Paul law firm, where he specialized in corporate and real-estate law, and taught night classes at his alma mater, St. Paul.

On November 8, 1933, Burger married Elvera Stormberg, a fellow student from the University of Minnesota. They would have two children together, Wade Allen Burger and Margaret Elizabeth Burger.

Gradually, Warren Burger became active in Republican politics, playing an important role in the gubernatorial campaigns of Harold Stassen in 1938, 1940 and 1942. He was the floor manager in Minnesota Governor Harold Stassen's bid for the presidential nomination at the 1948 and 1952 Republican National Conventions. Realizing Stassen wasn't going to be the nominee, Burger played a key role in nominating Dwight D. Eisenhower in 1952 by delivering the Minnesota delegation. In 1953, Eisenhower acknowledged Burger's effort by appointing him assistant U.S. attorney general for the Justice Department's Civil Division, and in 1955, nominated him to the U.S. Court of Appeals.

Over Burger's 13 years on the Court of Appeals, he was cautiously conservative on most issues, but on issues involving the rights of the criminally accused, he was known as a "law-and-order" judge. In public speeches, he often stated that the Fifth Amendment was an impediment to justice and that the courts had gone too far in favor of criminals. It was for these reasons that President Richard Nixon appointed Burger Earl Warren's successor as chief justice of the U.S. Supreme Court. Over the previous 10 years, Earl Warren had presided over several landmark cases that expanded the rights of the accused, including Miranda v. Arizona, Gideon v. Wainwright and Mapp v. Ohio. Nixon hoped Burger would provide strong leadership needed to curb what he and many conservatives believed was the Warren Court's liberalism.

Quickly confirmed by the Senate, Burger was sworn in as chief justice in June 1969. Contrary to conservatives' expectations, Chief Justice Burger and the three other Nixon-appointed justices did not reverse the tide of Warren Court decisions on civil rights and criminal law. The Burger Court upheld the 1966 Miranda decision requiring police to fully explain a person's rights upon arrest, and ruled against the Nixon Administration's desire to invalidate the need for a search warrant in cases of domestic surveillance in United States v. U.S. District Court (1972). Though he was a dissenting vote, just two weeks later, the Court invalidated all death-penalty laws then in force. There were a few cases where the Burger Court did erode Warren Court decisions, however, among them United States v. Leon (1984), where the Court recognized the "good-faith" exception of evidence seized on the basis of a mistakenly issued search warrant.

As chief justice, Warren Burger's opinions weren't particularly known for their comprehensive application of legal principles. Instead, Burger focused his efforts on the administrative functions of his office and worked to improve the efficiency of the judicial system. Among his reforms were courts employing professional administrators to help run the courts and continuing education for judges.

Burger retired from the U.S. Supreme Court in 1986, after 17 years of service—making him the longest-serving chief justice of the 20th century. He went on to work full-time as chairman of the Commission on the Bicentennial of the United States Constitution (1987), and served as chancellor of the College of William & Mary from 1986 to 1993. In 1988, he was awarded the Presidential Medal of Freedom.

In 1991, Burger was interviewed on the The MacNeil/Lehrer NewsHour where he took aim at the NRA stating that the Second Amendment “has been the subject of one of the greatest pieces of fraud, I repeat the word ‘fraud,’ on the American public by special interest groups that I have ever seen in my lifetime.” The following year, he stirred the gun lobby's ire even further stating that "the Second Amendment doesn't guarantee the right to have firearms at all." In his opinion, the Second Amendment’s purpose was being distorted from its original intent of ensuring “that the state armies' – the militia – would be maintained for the defense of the state."

Warren Burger died in his sleep on June 25, 1995, at his home in Washington, D.C., from congestive heart failure. He was 87 years old. Burger's casket was displayed at the Great Hall of the U.S. Supreme Court Building, and his remains are interred at Arlington National Cemetery.