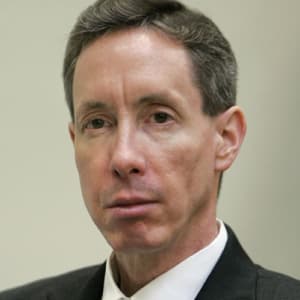 Warren Jeffs, the former leader of the polygamist sect Fundamentalist Church of Jesus Christ of Latter-Day Saints, was convicted in 2011 for the sexual assault of underage girls.

Who Is Warren Jeffs?

Warren Jeffs was born on December 3, 1955, in Sacramento, California. He is the leader of the Fundamentalist Church of Jesus Christ of Latter-Day Saints (FLDS), a polygamist sect based in Utah and Arizona. Jeffs first gained notoriety in 2006, when the FBI placed him on its Ten Most Wanted List for arranging marriages between his followers and underage girls. Although his 2007 conviction for accessory to rape was overturned, a 2008 raid on the FLDS compound in Texas resulted in evidence of the assault of underage girls, resulting in a 2011 sentence of life imprisonment for the FLDS leader.

Accusations by Becky and Roy Jeffs

In 2015, two of Warren Jeffs's children, daughter Becky and son Roy, came out to CNN's Lisa Ling and accused their father of molesting them when they were younger. “He realized he had so much power,” said Becky of her father. “‘What should I do with all this power? I can do anything I want.‘ And he did—and it went the wrong way.”

Both children, along with two of their other siblings, are no longer members of the FLDS.

Documentaries on Warren Jeffs and the FLDS

On February 19, 2018, A&E was set to debut Warren Jeffs: Prophet of Evil, a two-hour documentary that explores the inner workings of the FLDS community through interviews with former members and confidantes of its leader.

Other notable documentaries about the FLDS include Mike Watkiss's award-winning Colorado City and the Underground Railroad (2005), Damned to Heaven (2008), Sons of Perdition (2010) and Prophet's Prey (2015). Additionally, Lifetime aired an original movie on the subject with 2014's Outlaw Prophet: Warren Jeffs.

Early Life and Rise in the FLDS Church

One of the 21st century's most infamous religious leaders, Warren Jeffs grew up within the Fundamentalist Church of Jesus Christ of Latter-Day Saints (FLDS) community. This religious sect is an offshoot from Mormonism, but it is not recognized by or affiliated with the mainstream Mormon church. The FLDS carries on one tradition that the Mormons abandoned in the 1890s: polygamy, or plural marriage.

The practice of polygamy goes back for generations in Jeffs's family. His father, Rulon, had at least 50 wives and dozens of children (some say the number is around 80) during his lifetime. Warren was born more than two months prematurely, and his survival led him to being seen as a golden child.

Jeffs grew up outside of Salt Lake City, Utah, and for more than 20 years he served as the principal of Alta Academy, an FLDS private school in the area. He was known for being a stickler for the rules and for discipline.

Outside of his job responsibilities, Jeffs was also active in the church. When Rulon became the new FLDS prophet in 1986, he changed the structure of the FLDS church, eliminating its council and placing himself as its only leader. In the late 1990s, Rulon's health started to decline and Warren positioned himself as his successor. He even took over as his father's spokesperson after Rulon suffered a serious stroke.

In 2002, Jeffs took the reins of the FLDS after the death of his father. He became the group's new prophet, which gave him control over its property holdings as well as its followers. Early in his tenure, Jeffs decided to marry some of his father's wives. He also sought out a place for a new FLDS community in west Texas.

There, Jeffs established the Yearning for Zion (YFZ) Ranch. He showed himself to be ruthless and controlling, excommunicating 21 men in 2004 for disobedience. Even for the faithful, Jeffs ruled over nearly every aspect of their lives, from the clothes they wore to whom they could marry to what toys children could play with. He insisted on no television and no Internet.

Jeffs soon found himself in legal hot water, however. The male followers he excommunicated in 2004 filed a civil suit against him later that year, and his nephew Brent Jeffs also brought him to court. Brent Jeffs claimed that his uncle had sexually assaulted him as a child. As criminal charges started to mount against Jeffs, he dropped out of sight.

Law enforcement didn't know exactly where Jeffs was during this time, but many assumed he was hiding out at various FLDS compounds to avoid prosecution. He was even added to the FBI's Ten Most Wanted list in 2006. When he was captured north of Las Vegas that August, Jeffs had several cell phones, more than $50,000 in cash and a stash of wigs and sunglasses in his vehicle.

In 2007, Jeffs was tried and convicted in Utah on charges of being an accessory to rape. That conviction was later overturned, but he faced more charges in Texas that came as a result of a raid on the YFZ Ranch in 2008. The raid yielded a treasure trove of evidence against Jeffs and several other members of the FLDS in connection to their marriages to underage girls.

Jeffs went on trial in 2011 for two of his "celestial marriages"—one with a 12-year-old girl and another with a 15-year-old girl who later had his child. Both of these so-called unions violated Texas law.

Some of the most damning evidence came from Jeffs's own records. He had the habit of having his wives write down all of his activities. He kept journals and made audiotapes, as well. A tape of the assault on the 12-year-old girl was played during the trial, and excerpts from his records were read aloud. "If the world knew what I was doing, they would hang me from the highest tree," read one journal entry.

Serving as his own attorney, Jeffs mounted a weak defense. He rambled on in court, reading at length from the Book of Mormon, and he used most of the half hour allotted for his closing argument to stand before the jury in silence. It was revealed during the proceedings that he had more than 70 illegal marriages, as many as a third of which were with underage girls.

In the end, Jeffs was found guilty on both counts of sexual assault and sentenced to life in prison. He is currently serving his sentence at Powledge prison near Palestine, Texas. Far from the model prisoner, he has gone on hunger strikes and attempted suicide. Despite these self-destructive activities, Jeffs still controls the FLDS and its members from behind bars.