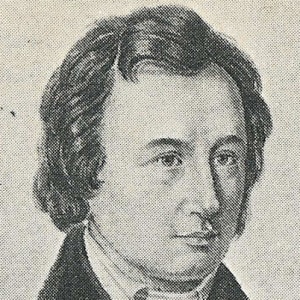 Wilhelm Grimm was a 19th century German author who, along with brother Jacob, published Grimms’ Fairy Tales, a collection famous for stories like Cinderella and Rapunzel.

Wilhelm Carl Grimm was born on February 24, 1786, in the town of Hanau, Germany, to Dorothea and Philipp Grimm. Wilhelm Grimm was the second oldest of six siblings, and would later embark on an industrious writing and scholarly career with his older brother, Jacob.

Wilhelm and Jacob studied law at the University of Marburg from 1802 to 1806, following the path of their lawyer father. Due to health issues, Wilhelm didn't start regular employment until 1814, when he obtained a position as secretary at a royal library in Kassel, Germany. Jacob Grimm would join him there in 1816.

Influenced by German Romanticism, a prevailing movement of the time, the brothers robustly studied the folklore of their region, with an emphasis on recording village oral storytelling that was vanishing with the advent of new technology. Jacob's and Wilhelm's work culminated in the book Kinder-und Hausmärchen (Children's and Household Tales), the first volume of which was published in 1812. A second volume followed in 1815. The collection would later come to be known as Grimms' Fairy Tales, with famous stories that include Snow White, Hansel and Gretel, The Golden Goose, Little Red Riding Hood and Cinderella.

Despite the emphasis on village oral traditions, the stories were in fact an amalgamation of oral and previously printed fairy tales, as well as information shared by friends, family members and acquaintances, with non-German influences. For instance, French writer Charles Perrault had earlier written a version of The Sleeping Beauty, known as Briar Rose in the Grimm collection.

The brothers aimed to make the collection more palatable to children by its second edition, and hence made note that they had altered and expanded the language of the stories. Wilhelm, seen as the more easygoing of the two with a passion for the arts, served as editor on future editions of Tales.

While Jacob remained single, in the mid-1820s, Wilhelm married Dortchen Wild, with whom he would have four children.

By 1830, the brothers had taken on work at the University of Göttingen, with Wilhelm becoming an assistant librarian. The two left the university in the mid-1830s—the result of being banished by the king of Hanover after they protested changes he'd made to the region's constitution.

In 1840, the brothers decided to settle in Berlin, Germany, where they became members of the Royal Academy of Science and lectured at university. They subsequently took on a massive project—a comprehensive dictionary of the German language. The book reached completion years after Wilhelm's passing.

Wilhelm Grimm died on December 16, 1859, in Berlin, Germany. Throughout his life, he authored or co-authored nearly two dozen books.

Grimms' Fairy Tales have been retold in a wide variety of media formats over the past several decades, and as such, the storylines have often been tweaked to fit varying ideas of what's appropriate for children. Much dialogue has been had about the violence contained in the stories' original forms, with controversy also arising over some of the tales' anti-Semitic and anti-feminist themes.

Nonetheless, the Grimm legacy continues to be celebrated. Marking the 200th anniversary of the brothers' historical collection, 2012 saw a number of special tie-in publications and special events, including the release of a bicentennial edition of The Annotated Brothers Grimm, edited by Harvard mythology scholar Maria Tatar, and a retelling of the brothers' classic tales by Philip Pullman, Fairy Tales From the Brothers Grimm.