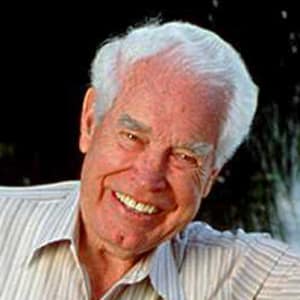 William Hanna was half of the cartoon-producing team of Hanna-Barbera, who created Tom & Jerry, Yogi Bear and The Flintstones.

William Hanna started collaborating with Joseph Barbera at MGM, and they created Tom & Jerry. In 1957, Hanna and Barbera set up their own studio and found great success with their next few projects, The Huckleberry Hound Show and Yogi Bear. From there followed The Flintstones, Scooby-Doo Where Are You?, and The Jetsons, among many other classics, making Hanna-Barbera a legendary animation studio.

Animator, producer, director. Born on July 14, in Melrose, New Mexico. With his longtime collaborator Joseph Barbera, William Hanna created some of the most famous characters and shows in cartoon history. He started out as an engineer, but had a difficult time getting work during the Great Depression.

Heading in a different direction, Hanna joined the staff of Pacific Art and Title, a cartoon production company. In 1930, he went to work for Harman-Ising Studios, which created the Looney Tunes and Merrie Melodies cartoons. His most significant work began in 1937 when he started his collaboration with Barbera at Metro-Goldwyn-Mayer (MGM) Studios. They made cartoon shorts that were shown at movie theaters before the main attraction. During their time at MGM, Hanna and Barbera created the legendary cat and mouse duo of Tom and Jerry. Tom and Jerry first appeared in Puss Gets the Boot (1940). Audiences loved it and the short received an Academy Award nomination. Hanna and Barbera made several more Tom and Jerry shorts, including several Academy Award-winners. The animated animals also appeared on the big screen. Jerry danced with Gene Kelly in Anchors Aweigh (1945) and both characters braved the waters with Esther Williams in Dangerous When Wet (1953).

When MGM closed its animation unit in 1957, Hanna and Barbera set up their own studio. Television was beginning to thrive, but animation seemed too costly for the new medium. Hanna figured out how to simplify the animation process to make it feasible for television. That year Hanna and Barbera had their first television program, The Ruff & Reddy Show, which debuted in 1957. But they found even greater success with their next few projects, The Huckleberry Hound Show and Yogi Bear.

In 1960, Hanna-Barbera Studios broke new ground, creating the first prime time animated series, The Flintstones. Set in the Stone Age, it followed the misadventures of Fred Flintstone (voiced by Alan Reed), his wife Wilma (Jean Vander Pyl), and their friends, Barney and Betty Rubble (Mel Blanc and Bea Benaderet). A send-up on modern suburbia, the show was a big success, reaching the top 20 in its first season. It proved that adults could enjoy cartoons as well as children and opened the door for such future shows as The Simpsons. The Flinstones has remained popular over the years and have spawned countless television specials and several feature films.

After tackling the past, Hanna and Barbera jumped to the future with The Jetsons in 1962. Audiences enjoyed watching the antics of this space-age family, complete with a robot maid named Rosie. Other popular projects by the pair around this time were The Adventures of Johnny Quest and The Space Ghost.

In the late 1960s, Hanna and Barbera scored another big hit with Scooby Doo, Where Are You? Later they also produced the critically acclaimed Charlotte's Web (1973), an animated film adaptation of E. B. White's popular children's book. Some of their later projects included Josie and the Pussycats in Outer Space and The Smurfs. In all, the pair is believed to have produced more than 3,000 half-hour shows and 150 television series, according to the Los Angeles Times. For most of their projects, Hanna tackled the directorial duties and worked on the timing while Barbera did much of the writing. They both served as producers. As their business grew, Hanna became more involved in administrative responsibilities as well.

During his career, Hanna won numerous accolades. He was nominated for several Emmy Awards and won several Emmys, including one for Outstanding Achievement in Children's Programming in 1973 for Last of the Curlews: The ABC Afterschool Special. The Academy of Television Arts and Sciences gave Hanna and Barbera the prestigious Governors Award in 1988.

Hanna died on March 22, 2001, in Hollywood, California. He has left an indelible mark on popular culture, producing the shows that many generations have grown up watching. Hanna will be remembered for the immortal characters he helped create and for revolutionizing the field of animation.