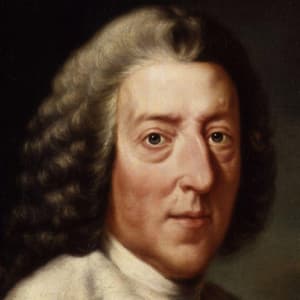 Born in London, England, in 1708, William Pitt, 1st Earl of Chatham, entered politics at age 27 and quickly rose to prominence with his skillful oratory and strong criticism of the Crown's policies. He became a champion of the common man and helped lead Britain to victory in the Seven Years' War. Advocating for fair polities toward the American colonies, hoping to prevent their declaring independence, into his later years, Pitt died in 1778.

William Pitt, 1st Earl of Chatham, was born in London, England, on November 15, 1708, to Robert Pitt and Harriet Villiers Pitt. His father's and grandfather's service in India established the family fortune and a place in British politics. Young William attended Eton College before going on to Trinity College, Oxford, and then attended the University of Utrecht in the Dutch Republic.

William Pitt was elected to the House of Commons as a Tory in 1735, at age 27, when the Whig Party dominated British government. A brilliant orator, he was a relentless critic of Prime Minister Robert Walpole's handling of the War of Austrian Succession. The criticism was embarrassing to the Crown and began a long period of friction between Pitt and King George II.

In 1746, King George II reluctantly appointed William Pitt postmaster general—a position that he held with distinction. From this, Pitt established a reputation for honesty and integrity—qualities that appealed to the British public and earned him the moniker "the Great Commoner." However, his denunciations of the government's handling of the War of Austrian Succession and French aggression cost Pitt a promotion, and by 1755, he was dismissed as paymaster general.

In October 1754, Pitt married Hester Grenville, who was 23 years his junior. Attractive and intelligent, Hester proved a good match for Pitt, and she loved him deeply. The couple had five children—three sons and two daughters. William Pitt, the Younger, was their second son.

Tensions between France and Britain broke out into what was to become the Seven Years' War in 1756. By the end of 1757, Britain had suffered a string of military defeats, and Pitt, who was recalled to government, proceeded to make strategic changes in how the war was fought. He ordered British troops into Germany to isolate French forces, and the navy captured French possessions around the globe. By 1759, the war had turned Britain's way in a series of dramatic victories.

By the war's end, Britain was controlling French territory in Canada and had established itself as a truly global empire. William Pitt had reached the peak of his power, but fortunes would quickly turn upon the death of George II. His grandson, George III, disliked Pitt, and the two were soon in dispute over a number of issues. Pitt resigned in 1761, finding himself once again out of government.

Ill health kept William Pitt out of office until July 1766, when a political shakeup occurred and Pitt formed a coalition government on his own terms. He joined the House of Lords, becoming 1st Earl of Chatham—a move considered somewhat of a betrayal, given Pitt's lifelong commitment to the common man.

Within a year of taking office, William Pitt faced deteriorating health and intense political battles with hardline Members of Parliament. He resigned in 1768 and, over the next 10 years, focused on the growing crisis in North America. He tried to avert the American colonies from declaring independence by advocating a gentler approach to taxing and enforcement, and took a critical stand against King George III and Parliament's corrosive policies toward the colonies.

On April 7, 1778, Pitt was in the House of Lords chamber debating a motion to grant the colonies' request for independence. As he rose to speak, he suddenly clutched his chest and collapsed. Pitt was taken from the chamber to Hayes, in Kent, England, where he died on May 11, 1778, at the age of 69.