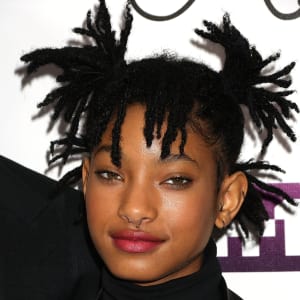 Willow Smith, the daughter of stars Will Smith and Jada Pinkett Smith, gained musical fame in 2010 with her first hit single “Whip My Hair”.

Who Is Willow Smith?

Born in Los Angeles in 2000 to Hollywood star parents Will Smith and Jada Pinkett Smith, Willow Smith began appearing in films in 2007. In 2010 she began recording music, working with producer Jay-Z to release her first hit single, "Whip My Hair."

Willow Camille Reign Smith was born into a blockbuster Hollywood family on October 31, 2000. Her father, Will Smith, is an actor who has starred in such box office hits as Independence Day, The Pursuit of Happyness, and I Am Legend. Her mother, Jada Pinkett Smith, is also a successful actress who has appeared in The Nutty Professor, The Women, and The Matrix trilogy. Willow's two older brothers, Trey and Jaden Smith, are in the entertainment business as well. Trey appeared in Will Smith's "Just the Two of Us" music video and Jaden starred in The Karate Kid, The Pursuit of Happyness, The Day the Earth Stood Still, and After Earth.

The Smith children grew up in a household firmly committed to close-knit involvement in the family "business." From a young age, Willow watched her parents on set, traveled with them to work on location, and saw firsthand just what goes into a Hollywood production.

Willow Smith made her acting debut in the blockbuster film I Am Legend at the tender age of 7. Even though dad Will Smith was the star of the film, she was made to audition like anyone else. Her budding sense of professionalism and drive shone through on the set of I Am Legend. When subzero temperatures at the filming of several outdoor scenes put Smith to the test, her father said, "Willow was out there and she has her stuff on and she's cold and she's getting a little irritable. And she looks at me and says, 'Daddy, I don't care how low it goes. I'm going to finish.'"

Smith's second foray into the film business came in 2008 when she played the supporting role of Countee in the family-friendly Kitt Kittredge: An American Girl. The G-rated movie was produced in part by Julia Roberts and based on the Kitt Kittredge stories by Valerie Tripp. Set in the United States during the Great Depression, the story follows a young girl (played by Abigail Breslin) who sets out to be an investigative reporter and ends up becoming a local hero. Smith, along with the rest of the cast, won a Young Artist Award for Best Performance in a Feature Film.

In 2008-09, Smith also tried her hand at voice acting in a pair of animated films, playing Baby Gloria in Madagascar: Escape 2 Africa and Abby in Merry Madagascar.

As it turns out, Smith's flair for acting isn't the only thing the young star inherited from her parents. Following in their philanthropic footsteps, in 2009 Willow and her brother Jaden became Youth Ambassadors of Hasbro's Project Zambi. In their role as ambassadors for the project, they help raise awareness for children orphaned by the global AIDS epidemic by participating in fundraising and outreach campaigns. When asked about her involvement, Smith said, "Project Zambi is about kids and for kids, and it's so important that we all learn to take care of each other."

Turning back to her work before the camera, Smith made a jump to TV when she guest-starred in the Nickelodeon series True Jackson, VP. Though it only was a one-time appearance, Smith loved the quick-fire nature of the TV set and found it easy to "work and have fun at the same time." Always the life of the party on set, her True Jackson cast mates quickly discovered her uncanny ability to mimic her dad, "He's giving me advice like 'Willow, stay in the moment! You have this, you got it down. Just stay in the moment. OK, now go out there and kill it.'"

In the fall of 2010, Smith leapt into the pop music scene with her hip-hop single "Whip My Hair." Buzz surrounding the soon-to-be hit came fast and furious, with critics calling Smith a young Rihanna in the making. The single reached No. 11 on the Billboard charts. The young star's crossover from screen to vinyl surprised even her parents. In an on-air interview, Jada Pinkett Smith said, "Let me tell you, she's 9 years old. I don't know where that voice came from. She sings like she's a grown woman. Like she's been around. I'm like, 'Where does all that experience in your voice come from?' I have no idea, but she's something. Music is her thing."

Smith officially joined the Roc Nation family in September 2010, signed by hip-hop legend Jay-Z, who first heard the smash single without knowing her age or her parentage. Already enthusiastic about her music, when Jay-Z met Smith in person, it sealed the deal. "She walked in and the first thing she said was, 'I'm really nervous,' and I thought, 'That's maturity to explain exactly how she was feeling when she walked right into the room.' I knew right then she was a star," Jay-Z said.

Barely a preteen at the wise old age of 10, Smith has already figured out a few key life philosophies. When asked about the meaning of "Whip My Hair," she says, "It means just be an individual. Like, you can't be afraid to be yourself, you have to be yourself, and you can't let anyone tell you that that's wrong."

Smith continued to create music and in December 2015, she released her very first album ARDIPITHECUS. Explaining the title, Smith said: "Ardipithecus Ramidus is the scientific name of the first hominid bones found on earth. I wanted to name my musical compilation after it because, while I was making these songs I was in such a transitional state. Digging deep in the soil of my heart and finding bits and pieces of my ancient self that tell stories, which end up being the lyrics to the songs."

In an interview with Girlgaze in late 2017, Smith described the difficulties of coming of age in a famous family.