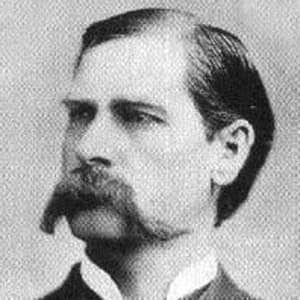 Wyatt Earp was a frontiersman, marshal and gambler. After moving to Tombstone, Arizona, he got into a feud, which ended in a gunfight at the O.K. Corral.

Wyatt Earp was born March 19, 1848. One of the icons of the American West, he worked for the law and helped tame the wild cowboy culture that pervaded the frontier. In Tombstone, Arizona, Wyatt got into a feud with a local rancher that resulted in the gunfight at the O.K. Corral, perhaps the most famous gunfight in American history. Earp died in Los Angeles on January 13, 1929.

One of the most celebrated legends of the American West, Wyatt Berry Stapp Earp was born on March 19, 1848, in Monmouth, Illinois, the third of Nicholas and Virginia Ann Earp's five sons.

A restless nature shaped Nicholas Earp, a hard-edged father and a drinker, who moved his family frequently in the unsettled American West in hopes of striking it rich.

The Civil War broke out when Earp was 13. Desperate to leave the family farm in Illinois and find adventure, Earp tried several times to join his two older brothers, Virgil and James, in the Union army. But each time, the runaway Earp was caught before he ever reached the battlefield, and was returned home.

At the age of 17 Earp finally left his family, now living in California, for a new life along the frontier. He worked hauling freight, and then later was hired to grade track for the Union Pacific Railroad. In his downtime he learned to box and became an adept gambler.

In 1869, Earp returned to the fold of his family, who had made a home in Lamar, Missouri. A new, more settled life seemed to await Earp. After his father resigned as constable of the township, Earp replaced him.

By 1870 he'd married Urilla Sutherland, the daughter of the local hotel owner, built a house in town and was an expecting father. But then, everything changed. Within a year of their marriage Urilla contracted typhus and died, along with her unborn child.

Man of the West

Broken and devastated by his wife's death, Earp left Lamar and set off on a new life devoid of any kind of grounding. In Arkansas, he was arrested for stealing a horse, but managed to avoid punishment by escaping from his jail cell. For the next several years, Earp roamed the frontier, making his home in saloons and brothels, working as a strongman and befriending several different prostitutes.

In 1876 he moved to Wichita, Kansas, where his brother Virgil had opened a new brothel that catered to the cowboys coming off their long cattle drives. There, he also began working with a part-time police officer on rounding up criminals.

The adventure and the little bit of press Earp received from the job appealed to him, and eventually he was made city marshal of Dodge City, Kansas.

But while he'd reinvented himself as a lawman, the speculative spirit that had driven his father ran in Earp as well. In December 1879, Earp joined his brothers Virgil and Morgan in Tombstone, Arizona, a booming frontier town that had only recently been erected when a speculator discovered the land there contained vast amounts of silver. His good friend Doc Holliday, whom he'd met in Kansas, joined him.

But the silver riches the Earp brothers hoped to find never came, forcing Earp to begrudgingly to return to law work. In a town and a region desperate to tame the lawlessness of the cowboy culture that pervaded the frontier, Earp was a welcome sight.

Gunfight at the O.K. Corral

In March 1881 Earp set out to find a posse of cowboys that had robbed a Tombstone stagecoach and its driver. In an effort to close in on the outlaws, he struck a deal with a rancher named Ike Clanton, who regularly dealt with the cowboys working around Tombstone. In return for his help, Earp promised Clanton he could collect a $6,000 reward.

But the partnership quickly dissolved. Clanton, paranoid that Earp would leak the details of their bargain, turned against him. By October Clanton was out of his mind, drunk and parading around Tombstone's saloons, bragging that he was going to kill one of the Earp men.

Everything came to a head on October 26, 1881, when the Earps, along with Doc Holliday, met Clanton, his brother Billy, and two others, Frank McLaury and his brother, Tom, on a small lot on the edge of town near an enclosure called the O.K. Corral.

There, the greatest gunfight in the West's history took place. Over the course of just 30 seconds, a barrage of shots was fired, ultimately killing Billy Clanton and both of the McLaury brothers. Virgil and Morgan Earp, as well as Holliday, all were injured. The only one unscathed was Wyatt.

The battle ratcheted up tensions between the cowboy community and those who were looking for a more settled West to emerge. Ike Clanton went on a rampage, orchestrating the shooting of Virgil Earp, severely wounding his left arm, and the assassination of Morgan Earp.

As a result of Morgan's death, Wyatt Earp set off in search of vengeance. With Holliday and a small posse of others, he roamed the frontier on a killing spree that made headlines around the nation, earning the group both praise and condemnation for taking on the West's wild cowboy culture.

As the American West grew to be more settled, Earp's place in it became less certain. With his companion, Josephine Marcus, he continued to seek out the success that had eluded him most of his life. He ran saloons in parts of California and in Nome, Alaska, before settling down in Los Angeles.

During his last years, he became infatuated with Hollywood's portrayal of the West and his legacy. He longed for a film that told his story and set the record straight on his accomplishments. But the kind of recognition he craved came only after his passing on January 13, 1929, at his Los Angeles home.

The Earp story was remade with the 1931 publication Wyatt Earp: Frontier Marshal by biographer Stuart Lake. In it, the former frontiersman was transformed into a Western hero that Hollywood and the American public came to adore.