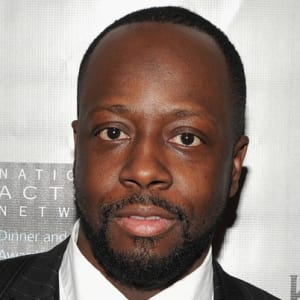 Wyclef Jean is a Haitian musician whose band, the Fugees, hit it big in the mid-1990s with ‘The Score.’

With a distinctive lilt to his voice, Wyclef Jean fit perfectly into the makeup of the Fugees, the group with which he would find international fame in the 1990s, and whose signature sound blended rugged rhymes and sweet songs. Later a solo artist, Wyclef’s life has at times been dominated by politics – there was an abortive attempt to run for president of Haiti in 2010, and subsequent controversy surrounding a charity he established. With his eyes on other things, he hasn’t released a solo album since 2009, but has kept his hand in with occasional guest appearances.

An Immigrant's Tale: From Haiti to Brooklyn

Wyclef Jean was born Nel Ust Wyclef Jean on October 17, 1969, in the small town of Croix-des-Bouquets, just outside of Port-au-Prince, Haiti. Jean was one of four children — three sons and a daughter — born to pastor Gesner Jean and his wife, Yolanda.

When Wyclef was nine years old, his family moved to the Coney Island area of Brooklyn, New York. "When I got to America," Jean later told Ebony magazine, "I was expecting to see money falling from the sky." But the Marlboro housing projects, where Jean and his family lived, didn't live up to Jean's expectations. Nevertheless, the opportunities available in America were plentiful compared to those in Haiti.

Wyclef, who spoke only Haitian French when he entered the States, quickly learned English from listening to rap music. Music soon became one of Wyclef's chief interests; his mother sensed his talent early, and gave him a guitar as a gift in the hope of keeping him away from the local gang activity. The first song he learned to play was Steve Martin's humorous spoof, "King Tut."

In his early teens, Jean and his family moved to Newark, New Jersey, so that Gesner Jean could assume a post at the city's Good Shepherd Church of the Nazarene. At Newark's Vailsburg High School, Wyclef stayed focused on his passion for music. He majored in jazz, studied the music business and learned to play more than 15 instruments.

Along with his cousin, Prakazrel "Pras" Michel, and friend Lauryn Hill, Jean also started experimenting with hip hop. In order to afford studio time to record their original compositions, Jean worked at a local McDonald's.

Jean's talent came to the attention of music executives and, while he was still a minor, he was offered a recording contract. But the deal fell through, because Jean's father refused to condone his musical tastes. "When I'd come back from the studio, I'd get a whipping from my dad, 'cause I was playing devil's music," Jean later told Rolling Stone magazine.

The Formation of The Fugees

Instead, Jean and Michel played for Vailsburg High School's swing choir and formed a rap group called Exact Change, which rapped their positive message in six languages. Changing their name to Tranzlator Crew, they were signed to Columbia Records in 1992. After a legal dispute with another band named Translator, the group renamed themselves the Fugees, a shortened version of the word "refugees." Their debut album, Blunted on Reality (1994) had been in label limbo since 1992 and failed to capture the public’s imagination. The label’s decision to bring in the producer Salaam Remi to remix the singles "Nappy Heads" and "Vocab" was a masterstroke. He smoothed out their rugged sound and set the template for their breakthrough follow-up album. “The Fugees didn’t have any hit records and I was able to jump start them and give them the spark,” Remi later recalled. “And then their own artistry and talent was able to take it further.”

It was their second and final album, The Score (1996), which catapulted the Fugees to international success. The Score was certified six times platinum in the United States, with worldwide sales totalling 17 million. The single "Killing Me Softly," a remake of Roberta Flack's 1970s hit, stayed at the top of the R&B singles chart for seven months, while "Fu-Gee-La" and "Ready or Not" were also hits. Critics were very kind to a group whose debut they had mostly ignored. Spin gave the album 9 out of 10 and raved that “organic interaction is the hallmark of this album.” Two Grammy wins followed in 1997.

The Fugees continued recording together, but they also began to work on solo projects. The group would never record another album, touring the world but eventually splitting due to personal issues.

Jean released and produced his album The Carnival in 1997, which explored the musical gamut, including a mix of Creole, salsa, reggae, Afro-Cuban, R&B, funk, rap and orchestral selections. The platinum-selling solo album received rave reviews from critics and was a smash-hit in Haiti. The singles "We Trying to Stay Alive" and "Gone Till November" were also successful.

In 2000, he released his second solo effort, The Ecleftic: 2 Sides II a Book, which featured guests including Kenny Rogers and Mary J. Blige. In 2002, Jean released his next solo effort, Masquerade, which included a collaboration with Tom Jones, but sales were down and critical reaction was muted. He followed up with a Greatest Hits album and also with The Preacher's Son, both released in 2003. The multilingual Welcome to Haiti: Creole 101 dropped in 2004, with many lyrics in Creole. A hit collaboration with Shakira in 2006 for the single "Hips Don’t Lie" gave Clef another taste of success — in contrast to his 2007 album The Carnival II and 2009’s From the Hut, to the Projects, to the Mansion.

February 2017 saw the release of an EP, J’ouvert, intended to act as a teaser for his forthcoming The Carnival Vol. III album.

Away from music, Jean has made a concerted effort to represent the diaspora he hails from. However, it hasn’t always gone smoothly. The Yele Haiti charity he established in 2001 folded in 2012. Attempts to raise money for victims of the 2010 Haiti earthquake ended up in the courts and the charity was criticized for repeatedly failing to file tax returns. An investigation concluded that vast amounts of money raised through the charity had gone to Jean and his entourage for travel expenses.

In 2010, Jean announced he’d be running for president of Haiti in that year’s election. However, his candidacy was refused as he hadn’t been a resident in Haiti for the five prior years.

Jean is married to Marie Claudinette Pierre-Jean, and the two have an adopted daughter, Angelina. His memoir, Purpose: An Immigrant’s Story was published in 2012 — but perhaps Wyclef Jean has another chapter or two to live out yet.