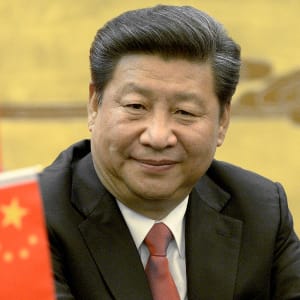 Xi Jinping is the top leader in the Communist Party of China and the President of the People’s Republic of China.

Who Is Xi Jinping?

Born in 1953 to a Chinese Communist Party (CCP) leader, Xi Jinping worked his way up the party ranks to become a major player in the Chinese Politburo. By 2013, Xi was elected General Secretary of the Communist Party, Chair of the Military Commission and President of the People’s Republic of China. Although he earned criticism for human rights violations and disruptive economic regulations, Xi also continued the country's rise as a global superpower. His name and philosophy was added to the party constitution in 2017, and the following year he successfully pushed for the abolition of presidential term limits.

Xi Jinping was born June 15, 1953, the son of a well-placed Chinese Communist Party leader, Xi Zhongxun, a former comrade of Communist China’s founder Mao Tse-tung. Considered a “princeling”—someone destined to rise within the government due to family connections—Xi Jinping’s destiny was altered when his father was purged from power in 1962.

In 1966, Mao launched the Cultural Revolution, a sociopolitical movement intended to preserve “true” Communist ideology and purge remnants of capitalist society. All formal education was halted, and Xi Jinping, at that time in high school, was sent down to work in a remote farming village for seven years, doing manual chores and subsisting on rice gruel. It was there that Xi grew up both physically and mentally. Considered a weakling when he first arrived, he grew strong and compassionate and developed good relations working alongside the villagers. Though the Cultural Revolution was a failure, Xi emerged with a sense of idealism and pragmatism.

Rise in the Communist Party

After numerous unsuccessful attempts, in 1974 Xi Jinping was accepted into the Communist Party. The following year he began to study chemical engineering at Beijing’s Tsinghua University, earning a degree in 1979. From that point forward, he steadily rose through the ranks of the Communist Party. Between 1979 and 1982, Xi served in the Central Military Command as vice premier, gaining valuable military experience. It was around this time that he married his first wife, Ke Lingling, the daughter of the Chinese ambassador to Great Britain. The marriage ended in divorce within a few years.

From 1983 to 2007, Xi Jinping served in leadership positions in four provinces, beginning with Hebei. During his tenure in Hebei, Xi Jinping traveled to the United States and spent time in Iowa with an American family, learning the finer points of agriculture and tourism. After his return, he served as vice mayor of Xiamen in Fujian, where in 1987 he married folk singer Peng Liyuan, who also holds the rank of army general in the People’s Liberation Army. The couple has a daughter, Xi Mingze, who studied at Harvard University under a pseudonym.

Xi would make a steady ascent in the ensuing decades, with postings as governor of the Fujian and Zhejiang provinces and as party secretary. In 2007, his career got a further boost when a pension-fund scandal rocked the leadership of Shanghai and he was named as its party secretary. He spent his tenure promoting stability and restoring the city’s financial image, and that same year was chosen for the Politburo Standing Committee. In early 2008, Xi’s visibility became even greater when he was elected vice president of the People’s Republic of China and placed in charge of preparations for the 2008 summer Olympics in Beijing.

Elected Leader of the People's Republic of China

In early 2012, Xi Jinping traveled to the United States to meet with President Barack Obama and members of his cabinet. He also made a nostalgic trip back to Iowa and then visited Los Angeles. During his visit, he spoke of increasing trust and reducing suspicions between the two countries while respecting each other’s interests in the Pacific-Asian region.

Later that year, on November 15, Xi Jinping was elected general secretary of the Communist Party and chairman of the Central Military Commission. In his first speech as general secretary, Xi broke from tradition and sounded more like a Western politician, speaking about the aspirations of the average person and calling for better education, stable jobs, higher income, a more reliable safety net of retirement and health care, better living conditions and a better environment. He also vowed to take on corruption within the government at the highest levels. He referred to his vision for the nation as the "Chinese Dream."

On March 14, 2013, Xi completed his ascent when he was elected president of the People’s Republic of China, a ceremonial position as head of state. In his first speech as president he vowed to fight for a great renaissance of the Chinese nation and a more prominent international standing.


Fulfilling one of his early promises, Xi almost immediately embarked on a campaign to deal with government corruption. He arrested some of the country's most powerful

figures, including former security chief Zhou Yongkang, and by the end of 2014 the CCP had disciplined more than 100,000 officials.

Xi also set about stimulating a slowing economy. In 2014, China introduced the "One Belt, One Road" initiative to bolster trade routes and launched the ambitious Asian

Infrastructure Investment Bank. Domestically, his party expanded the power of private banks and allowed international investors to trade shares directly on the

Xi has also changed some of the laws enacted by predecessors, formally ending China's one-child policy in 2015. His elimination of the "reeducation through labor"

However, the Chinese leader has drawn scrutiny for his methods. Critics have noted that his crackdown on government corruption mainly targeted political opponents, and

the CCP has come under fire by human rights groups for jailing journalists, lawyers and other private citizens. Under Xi's reach, censors have sought to eliminate

Xi has also overseen economic regulations that have reverberated beyond his country's borders. The government stepped in to prop up a sagging housing market in 2014,

and suddenly devalued the yuan in the summer of 2015. Despite promising during a trip to the United States in September that China would never manipulate currency to

increase exports, Xi has been accused of that very approach.


As part of his goal to establish China as a 21st century global superpower, Xi has pushed for military reform to upgrade naval and air forces. Already chairman of the

Central Military Commission, in 2016 he added the title of commander in chief of its joint battle command center.

In recent years, Xi has asserted China's naval capacities through the construction of artificial islands within disputed territories of the South China Sea. Despite

his claims to the contrary, satellite photographs indicated that the islands were being used to house military developments. In July 2016, an international tribunal in

The Hague ruled that China had illegally claimed those territories, although China refused to accept the authority of that ruling.

While often at odds with the U.S. over trade issues, Xi has publicly acknowledged the need for China to cooperate with its Western counterpart on the issue of climate

change. In September 2016, Xi and U.S. President Barack Obama announced they were formally adopting the international climate-change agreement reached in Paris the

In November 2017, Xi met with U.S. President Donald Trump for a two-day summit in Beijing. Despite earlier accusing China of being a currency manipulator, Trump offered praise this time around for the country taking advantage of financial opportunities. For his part, Xi spoke about a “win-win” cooperation between the two economic superpowers, announcing memorandums of understanding to increase trade by $253 billion.

However, the two leaders then contrasted one another during their subsequent appearances at the Asia-Pacific Economic Cooperation summit in Vietnam. In his speech, Trump criticized the development of globalization for harming American workers and companies, declaring, "we are not going to let the United States be taken advantage of anymore." Taking the stage immediately afterward, Xi painted a glowing picture of the collective benefits of globalization, saying, "let more countries ride the fast train of Chinese development."

Tensions between the two sides mounted after Trump ordered stiff tariffs on aluminum and steel imports in March 2018, as part of U.S. efforts to level the "out of control" trade deficit with its Asian counterpart. China responded by slapping tariffs on a range of American goods, including fruits, nuts and pork products, prompting Trump to threaten to escalate the matter further.

Xi sounded a conciliatory note during his speech at the Boao Economic Forum in April, in which he pledged to "significantly broaden market access" for foreign companies by easing restrictions in the financial and auto sectors and lowering import tariffs for vehicles. Additionally, he promised greater protection for intellectual property.
"China does not seek a trade surplus," the president said. "We have a genuine desire to increase imports and achieve greater balance of international payments under the current account."

Amid the escalating tensions of a potential trade war, the yuan fell to a six-month low against the dollar in late June, sparking speculation that China would let that course continue and make their goods cheaper on the world market. Meanwhile, the matters of military deployments in the disputed South China Sea and American support of Taiwan's claims of independence also remained delicate subjects in discussions with Washington.

Xi indicated as much in a meeting with U.S. Defense Secretary James Mattis in June. "Our stance is steadfast and clear-cut when it comes to China’s sovereignty and territorial integrity," the president said. "We cannot lose one inch of territory passed down by our ancestors. Meanwhile, we want nothing from others."

In October 2017, during a meeting of the 19th National Congress of the Communist Party, delegates voted to add the words "Xi Jinping Thought for the New Era of Socialism with Chinese Special Characteristics" to the party constitution. The addition was meant to serve as a guiding principle for the party moving forward, with Xi's vision paving the way for global leadership in the years to come.

Furthermore, the constitutional change boosted Xi's status to match those of exalted former Communist Party heads Mao Tse-tung and Deng Xiaoping. It was believed that, as one of the country's strongest leaders in decades, Xi possessed the ability to hold on to power as long as he desired.

In a speech to close the 16-day legislative session, Xi spoke of forging unification with Taiwan, promoting "high-quality" development that values innovation and expanding his signature Belt and Road foreign policy initiative. "The new era belongs to everyone, and everyone is a witness, pioneer and builder of the new era," he said. "As long as we are united and struggle together, there will be no power to stop the Chinese people from realizing their dreams."