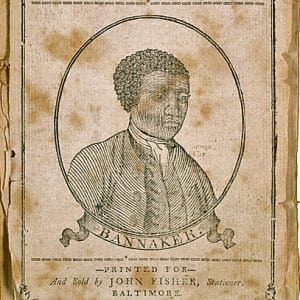 Benjamin Banneker was a largely self-educated mathematician, astronomer, compiler of almanacs and writer.

Benjamin Banneker was born on November 9, 1731, in Ellicott's Mills, Maryland. A free black man who owned a farm near Baltimore, Banneker was largely self-educated in astronomy and mathematics. He was later called upon to assist in the surveying of territory for the construction of the nation's capital. He also became an active writer of almanacs and exchanged letters with Thomas Jefferson, politely challenging him to do what he could to ensure racial equality. Banneker died on October 9, 1806.

Born on November 9, 1731, in Ellicott's Mills, Maryland, Benjamin Banneker was the son of an ex-slave named Robert and his wife, Mary Banneky. Mary was the daughter of an Englishwoman named Molly Welsh, a former indentured servant, and her husband, Bannka, an ex-slave whom she freed and who asserted that he came from tribal royalty in West Africa.

Because both of his parents were free, Benjamin escaped the wrath of slavery as well. He was taught to read by his maternal grandmother and for a very short time attended a small Quaker school. Banneker was primarily self-educated, a fact that did little to diminish his brilliance. His early accomplishments included constructing an irrigation system for the family farm and a wooden clock that was reputed to keep accurate time and ran for more than 50 years until his death. In addition, Banneker taught himself astronomy and accurately forecasted lunar and solar eclipses. After his father's passing, he ran his own farm for years, cultivating a business selling tobacco via crops.

Interests in Astronomy and Surveying

Banneker's talents and intelligence eventually came to the attention of the Ellicott family, entrepreneurs who had made a name and fortune by building a series of gristmills in the Baltimore area in the 1770s. George Ellicott had a large personal library and loaned Banneker numerous books on astronomy and other fields.

In 1791, Andrew Ellicott, George’s cousin, hired Banneker to assist in surveying territory for the nation’s capital city. He worked in the observatory tent using a zenith sector to record the movement of the stars. However, due to a sudden illness, Banneker was only able to work for Ellicott for about three months.

Banneker's true acclaim, however, came from his almanacs, which he published for six consecutive years during the later years of his life, between 1792 and 1797. These handbooks included his own astronomical calculations as well as opinion pieces, literature and medical and tidal information, with the latter particularly useful to fishermen. Outside of his almanacs, Banneker also published information on bees and calculated the cycle of the 17-year locust.

Benjamin Banneker's accomplishments extended into other realms as well, including civil rights. In 1791, Thomas Jefferson was secretary of state and Banneker considered the respected Virginian, though a slaveholder, to also be open to viewing African Americans as more than slaves. Thus, he wrote Jefferson a letter hoping that he would “readily embrace every opportunity to eradicate that train of absurd and false ideas and opinions which so generally prevail with respect to us." To further support his point, Banneker included a handwritten manuscript of an almanac for 1792, containing his astronomical calculations.

In his letter, Banneker acknowledged he was “of the African race” and a free man. He recognized that he was taking “a liberty” writing to Jefferson, which would be unacceptable considering “the almost general prejudice and prepossession which is so prevalent in the world against those of my complexion.” Banneker then respectfully chided Jefferson and other patriots for their hypocrisy, enslaving people like him while fighting the British for their own independence.

Jefferson quickly acknowledged Banneker's letter, writing a response. He told Banneker that he took “the liberty of sending your almanac to Monsieur de Condorcet [secretary of the French Academy of Sciences]…because I considered it as a document to which your whole colour had a right for their justification against the doubts which have been entertained of them.” Banneker published Jefferson’s letter alongside his original piece of correspondence in his 1793 almanac. Banneker's outspokenness with regard to the issue of slavery earned him the widespread support of the abolitionist societies in Maryland and Pennsylvania, both of which helped him publish his almanac.

Below is a letter from Jefferson to Banneker dated August 30, 1791 from the Library of Congress:

I thank you sincerely for your letter of the 19th. instant and for the Almanac it contained. no body wishes more than I do to see such proofs as you exhibit, that nature has given to our black brethren, talents equal to those of the other colours of men, &amp; that the appearance of a want of them is owing merely to the degraded condition of their existence both in Africa &amp; America. I can add with truth that no body wishes more ardently to see a good system commenced for raising the condition both of their body &amp; mind to what it ought to be, as fast as the imbecillity of their present existence, and other circumstance which cannot be neglected, will admit. I have taken the liberty of sending your almanac to Monsieur de Condorcet, Secretary of the Academy of sciences at Paris, and member of the Philanthropic society because I considered it as a document to which your whole colour had a right for their justification against the doubts which have been entertained of them. I am with great esteem, Sir, Your most obedt. humble servt. Th. Jefferson

Never married, Benjamin Banneker continued to conduct his scientific studies throughout his life. By 1797, sales of his almanac had declined and he discontinued publication. In the following years, he sold off much of his farm to the Ellicotts and others to make ends meet, continuing to live in his log cabin.

On October 9, 1806, after his usual morning walk, Banneker died in his sleep, just a month short of his 75th birthday. In accordance with his wishes, all the items that had been on loan from his neighbor, George Ellicott, were returned by Banneker’s nephew. Also included was Banneker’s astronomical journal, providing future historians one of the few records of his life known to exist.

On Tuesday, October 11, at the family burial ground a few yards from this house, Benjamin Banneker was laid to rest. During the services, mourners were startled to see his house had caught on fire, quickly burning down. Nearly everything was destroyed, including his personal effects, furniture and wooden clock. The cause of the fire was never determined.

Benjamin Banneker’s life was remembered in an obituary in the Federal Gazette of Philadelphia and has continued to be written about over the ensuing two centuries. With limited materials having been preserved related to Banneker's life and career, there's been a fair amount of legend and misinformation presented. In 1972, scholar Sylvio A. Bedini published an acclaimed biography on the 17th-century icon—The Life of Benjamin Banneker: The First African-American Man of Science. A revised edition appeared in 1999.