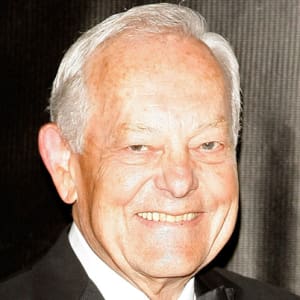 Bob Schieffer is an Emmy Award-winning political commentator and TV host who has worked for CBS News since 1969.

Born in Texas in 1937, Bob Schieffer began his journalism career in Forth Worth before moving to CBS News in 1969. Over his four-plus decades with the network, Schieffer served as a weekend anchor and host of the public affairs program Face the Nation, while becoming one of the few reporters to cover all four major Washington beats. The eight-time Emmy winner retired after his final Face the Nation broadcast in May 2015, but has since returned to CBS as a contributor.

Television journalist. Born Bob Lloyd Schieffer on February 25, 1937, in Austin, Texas. Raised in Fort Worth, Schieffer attended North Side High School and then Texas Christian University, where he joined the Reserve Officer Training Corps. After graduating with a B.A. in journalism and English in 1959, he served as a public affairs officer with the U.S. Air Force.

In 1957, while still a student at TCU, Bob Schieffer landed a job with the Fort Worth-based radio station KXOL for $1 an hour. Following his three years in the Air Force, he returned to his hometown to begin reporting for the Fort Worth Star-Telegram. His early years there were highlighted by chance encounter: After President Kennedy was shot in November 1963, Schieffer fielded a call from Lee Harvey Oswald's mother at the Star-Telegram's office, and wound up giving her a ride to Dallas.

In 1965, Schieffer became the first journalist from a Texas newspaper to report from Vietnam. He moved to television in 1967, serving as an anchor at WBAP-TV Dallas/Fort Worth, before jumping to CBS News in 1969.

With CBS, Bob Schieffer was assigned to the Pentagon from 1970 to 1974, and then served five years as the White House correspondent. In the meantime, he embarked on his long-running stints as a weekend anchor, taking over the Saturday edition of the CBS Evening News in 1973 and its Sunday broadcasts in 1977. He became the network’s chief Washington correspondent in 1982, and began his tenure as host of the Sunday morning public affairs program Face the Nation in 1991.

As his career progressed, Schieffer developed a strong reputation for his journalistic sensibilities. Whether reporting from behind a desk, moderating a panel or in the field, he was known to ask tough questions while remaining gracious and fair.

Following Dan Rather's controversial retirement from CBS Evening News in 2005, Schieffer became the interim host of the flagship weekday news program, providing a steadying presence and even a boost to ratings, until Katie Couric took the helm in September 2006.

A few months after announcing his retirement, Schieffer hosted Face the Nation one final time in May 2015. One of the few reporters to be assigned all four major Washington beats (the Pentagon, the White House, Congress and the State Department), he had covered every Democratic and Republican National Convention since 1972, interviewed every president since Richard Nixon, and even moderated three presidential debates.

The veteran journalist soon found he wasn't ready for full-time retirement just yet; in January 2016, CBS announced that he would return as a contributor for election coverage through the 2017 presidential inauguration.

In addition to winning eight Emmys, Bob Schieffer has been honored with the overseas Press Club Award, the Paul White Award presented by the TV News Directors Association and the Walter Cronkite Award for Excellence from the Cronkite School of Journalism at Arizona State University. He was named a living legend by the Library of Congress in 2008, and in 2013 he earned induction into the National Academy of Arts and Sciences Hall of Fame.

In 2005, to commemorate the renaming of TCU's journalism school in his honor, Schieffer began hosting an annual symposium of industry leaders at his alma mater. He discontinued his symposium after 11 years but remained active in affairs at TCU, which repackaged its journalism program into the newly christened Bob Schieffer College of Communication in 2013.

The renowned journalist is the author of four books, including Face the Nation: My Favorite Stories from the First 50 Years of the Award-Winning News Broadcast (2004) and Bob Schieffer's America (2008). He has two daughters with his longtime wife, Patricia.