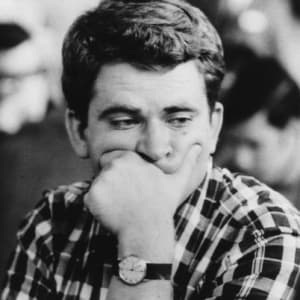 Russian Boris Spassky held the title of World Chess Champion until his loss to American Bobby Fischer in the 1972 “Match of the Century.”

Born on January 30, 1937, in Leningrad, Russia, Boris Spassky displayed his chess genius at an early age. He attained the rank of International Grandmaster in 1955, and was the World Chess Champion from 1969 until his loss to American Bobby Fischer in 1972. Spassky lost a rematch with Fischer in 1992, and continued to compete for enjoyment until being slowed by a serious stroke in 2010.

Boris Vasilyevich Spassky was born on January 30, 1937, in Leningrad, Russia. Forced to flee the city during the Nazi invasion of 1942, he learned to play chess while riding a train. The family struggled after settling in Kirov, but Spassky showed uncommon promise as a chess player. At the age of 10, he beat World Champion Mikhail Botvinnik in an exhibition.

In 1956, Spassky qualified for his first Candidates Tournament, a competition between the top challengers for the world title. However, he became distracted by his course work at Leningrad University and a divorce, and his play slipped in the following years.

Spassky switched trainers and eventually returned to the top of the field. He won his first of two USSR Championships in 1961, and was back in the Candidates Tournament in 1965. He developed a reputation for his all-around game, capable of aggressive attacks or patiently waiting for his opponent to make a mistake.

In 1966, Spassky was unsuccessful in his first attempt at claiming the world title held by Tigran Petrosyan. After earning another shot three years later, he outdueled his fellow Russian to become the 10th World Chess Champion.

Spassky held on to the title for three years until his defeat by American Bobby Fischer in Reykjavík, Iceland, in 1972. Billed the "Match of the Century," the competition seemingly took on greater meaning with its participants representing both sides of the Cold War. It was a disappointing loss for Spassky, his first in six matches against Fischer.

Spassky remained among the top players in the world for several years, winning the Soviet Championship in 1973 and partaking in multiple Candidates Tournaments. In the meantime, he settled outside Paris with his third wife and became a French citizen in 1978.

By the late 1980s, Spassky was no longer keeping pace at an elite level, his peers noting that he seemed content to earn draws in his matches.

In 1992, he lost a highly publicized rematch against the reclusive Fischer in Yugoslavia, which was then subject to United Nations trade sanctions. Fischer had already been in trouble for tax evasion; after his arrest in 2004, Spassky wrote a letter on his friend's behalf to U.S. President George W. Bush, stating, "Bobby and myself committed the same crime. Put sanctions against me also. Arrest me. And put me in the same cell with Bobby Fischer. And give us a chess set."

In the late stages of his career, Spassky enjoyed competing against some of the women's champions. He suffered a mild stroke in 2006, but a serious one in 2010 left him paralyzed on his left side and prompted an extensive rehabilitation program.

The 2015 biopic Pawn Sacrifice, starring Liev Schreiber as Spassky and Tobey Maguire as Bobby Fischer, follows the chess champions' rivalry set against the backdrop of the Cold War.