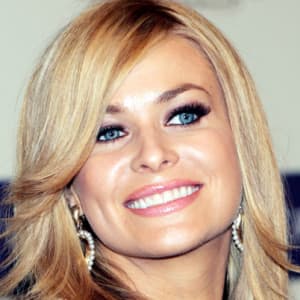 Playboy model Carmen Electra starred on the television show Baywatch. She married musician Dave Navarro in 2003, and co-starred with him on an MTV reality series.

Carmen Electra was born Tara Leigh Patrick on April 20, 1972, in Sharonville, Ohio. She moved to Los Angeles to pursue a music career. In 1991, she signed a record contract with Prince. Electra was a Playboy model before joining the cast of Baywatch in 1997, replacing Pamela Anderson. That same year, she was hired to host MTV's Singled Out, replacing Jenny McCarthy. In 2003, Electra married Dave Navarro and the two co-starred on an MTV reality series, ‘Til Death Do Us Part: Carmen & Dave.

Actress, musician and model Carmen Electra was born Tara Leigh Patrick on April 20, 1972, in Sharonville, Ohio. Growing up with parents in the entertainment industry, Electra studied dance from a very young age. After attending Cincinnati's School for the Creative and Performing Arts, she decided to pursue a career in music, moving from the midwest to Los Angeles, where she signed a record contract with Prince in 1991. It was Prince who encouraged her to change her name, reportedly saying that she looked like a "Carmen."

Electra also worked as a model, posing several times for Playboy before being cast as Pamela Anderson's replacement on the television series Baywatch in 1997. That same year, she was hired by MTV to host the popular game show Singled Out, replacing Jenny McCarthy, who left the program to begin a comedy series. In addition to TV, Electra has had small roles in such feature films as Scary Movie and Starsky and Hutch.

Electra is perhaps best known for her off-screen headlines. In the 1990s, she was romantically linked with musicians Tommy Lee and Fred Durst of Limp Bizkit. At the end of the decade, she had a brief marriage to flamboyant Chicago Bulls basket player Dennis Rodman. In 2003, she married rock musician Dave Navarro on MTV. The couple follow their nuptials with a reality series for the cable network, entitled 'Til Death Do Us Part: Carmen & Dave.