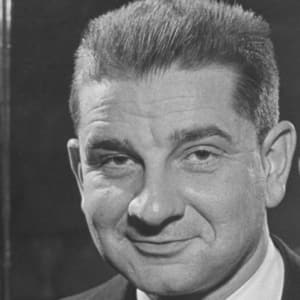 Charles Addams was an American cartoonist whose work was frequently featured in The New Yorker. His most famous creation was the humorously macabre Addams Family.

Charles Addams was born on January 7, 1912, in Westfield, New Jersey. After college, he moved to New York City and enrolled at the Grand Central School of Art. In 1935, he was hired by The New Yorker as a regular cartoonist and created his famous, "creepy and kooky" Addams Family, later adapted for television and film productions. Addams, who famously signed his work "Chas Addams," died in 1988.

Famed illustrator Charles Addams was born Charles Samuel Addams on January 7, 1912, in Westfield, New Jersey. The son of Charles Huey Addams, a piano company executive, and his wife, Grace M. Spear Addams, young Charles demonstrated an appreciation for the macabre at an early age. He had a deep fascination for coffins and skeletons, as well as a good practical joke.

"We had a dumbwaiter in our house," he later recounted, "and I'd get inside on the ground floor, and then very quietly I'd haul myself up to grandmother's floor, and then I'd knock on the door, and when she came to open the door, I'd jump out and scare the wits out of her."

Addams, whose father had originally studied to be an architect, was encouraged to draw at a young age. He attended Westfield High School then went on to Colgate University for two years before transferring to the University of Pennsylvania, where he finished his college degree. Addams then relocated to New York City, where he enrolled at the Grand Central School of Art.

Addams remained at the art school for just year. But he decided to remain in New York and in 1935 he was hired by The New Yorker as a regular cartoonist. The pay was modest—just $35 per cartoon—but the magazine allowed Addams to explore his voice and imagination as well as hone the dark humor that would come to define his work.

After a three-year stint in the U.S. Army in the early 1940s, Addams returned to New York, where his work was widely received, from a variety of fans. At one point he told fellow New Yorker cartoonist, James Thurber: "I have gotten a lot of letters about my work, most of them from criminals and subhumans who want to sell ideas. Some of the worst come from a minister in Georgia."

Addams's mind went to dark, ghoulish places few cartoonists would allow themselves to venture. His popularity extended to some of the biggest names in Hollywood. Cary Grant wanted to meet the man who called himself "A Defrocked Ghoul," as did Alfred Hithcock, who once showed up at Addams's New York home unannounced to see the cartoonist in the flesh.

By the early 1980s, Addams's work had comprised 12 book collections and been exhibited at institutions like the Fogg Art Museum, the Metropolitan Museum of Art, and the Rhode Island School of Design, as well as many others. He famously signed his work, Chas Addams, intentionally short-handing his first name because, he explained, "it looks better than writing out Charles."

Among his many honors over the course of his lifetime, Addams won the Humor Award from Yale, an honorary doctorate from the University of Pennsylvania, as well as a special award from the Mystery Writers of America.

Charles Addams married three times. He died on September 29, 1988 in New York City, after suffering a heart attack in his car just outside his apartment building.

"He's always been a car buff," his wife Marilyn told reporters. "So it was a nice way to go."