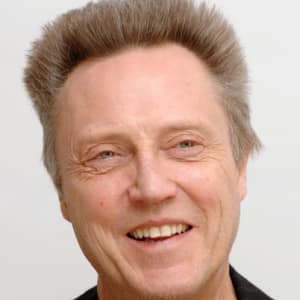 Eclectic, Academy Award-winning actor Christopher Walken is known for a wide array of screen roles, from ‘The Deer Hunter’ and ‘A View to a Kill’ to ‘Hairspray’ and ‘Peter Pan,’ also having hosted ‘Saturday Night Live’ multiple times and serving as a music video icon.

Who Is Christopher Walken?

Actor Christopher Walken was born in Queens, New York, in 1943. Walken began working in the theater in his late teens, and by the early 1970s he had begun working in film. His breakthrough part came with Woody Allen's Annie Hall (1977), and he went on to win an Academy Award for his role in 1978's The Deer Hunter, cultivating a full body of work in the '80s. In 1991, he gained his first Emmy Award nomination for his work on Sarah, Plain and Tall. A revered thespian who's known to work constantly, Walken has taken on a variety of projects that include everything from the Steven Spielberg drama Catch Me If You Can (for which he earned another Oscar nomination), to the music video for Fatboy Slim's "Weapon of Choice."

Oscar for 'The Deer Hunter'

Walken delivered a gut-wrenching performance in 1978's The Deer Hunter, co-starring Robert De Niro and Meryl Streep. Directed by Michael Cimino, the film followed the impact of the Vietnam War on a group of friends from a small town. Walken's character goes through a brutal transformation during the course of the movie, starting out as a laid-back steelworker and ending as a man tormented by memories of his time in a prisoner-of-war camp. For his efforts, Walken won the Academy Award for Best Supporting Actor.

Walken experienced turbulence in his personal life a few years later as a guest on the boat of actress Natalie Wood and her husband, Robert Wagner. On November 29, 1981, Wood drowned while the boat was moored off Catalina Island in California. Walken and Wood were working together on what proved to be her final film, the science-fiction thriller Brainstorm (1983).

Although the drowning was ruled an accident, suspicions about foul play fueling the actress's death continued to linger. The case was reopened in 2011, and in 2018, Wagner was named a "person of interest," though there seemed to be no additional questions about Walken's involvement.

Ronald Walken, better known by the pseudonym Christopher Walken, was born on March 31, 1943, in Queens, New York. A performer since the age of 3, Walken started out as a dancer, taking lessons as a child. "It was very typical for people—and I mean working-class people—to send their kids to dancing school. You'd learn ballet, tap, acrobatics, usually you'd even learn to sing a song," he later explained to Interview magazine.

The son of a baker, Walken would often leave his neighborhood in Queens and head to Manhattan with his brothers. There they would hang out at Rockefeller Center in Midtown where many of the television shows were shot. Sometimes they landed work as extras to make some pocket money. "They used a lot of kids more or less as furniture," Walken later told Entertainment Weekly. At the age of 10, he got a chance to work with comedian Jerry Lewis as an extra in a television skit.

Walken attended the famed Professional Children's School, geared toward students in the performing arts. Around the age of 18, he started working in theater, first landing roles in musicals because of his earlier studies. During a tour of West Side Story, he met actress Georgianne Thon, who later became his wife.

Early in his career, he changed his first name from Ronny to Christopher while performing in a nightclub act. "A lady in the act said she wanted me to be called Christopher, and I said, 'Fine.' … Now I wish I'd picked a shorter name because when I see my name in print, it looks like a freight train," he told The Hollywood Reporter.

After appearing in the chorus in Baker Street in 1965, Walken was asked to try out for a dramatic part. He played King Philip of France in the original production of James Goldman's historical drama, The Lion in Winter, with Rosemary Harris and Robert Preston in 1966. That same year, Walken had a small role in the Broadway revival of Tennessee Williams's The Rose Tattoo. He then appeared in Peter Ustinov's The Unknown Soldier and His Wife in 1967.

On the Big Screen

By the early 1970s, Walken had begun working in film. He had a supporting part in 1971's The Anderson Tapes, with Sean Connery and Dyan Cannon. His breakthrough role came six years later with his memorable turn in Woody Allen's Annie Hall (1977). In the comedic film, he played Duane, the offbeat, neurotic brother of the Diane Keaton title character.

Walken followed up his performance in The Deer Hunter as the star in Cimino's next effort, Heaven's Gate (1980). The Western historical drama proved to be one of the most legendary flops of all time. Costing more than $40 million to make, the film was savaged by the critics and earned little at the box office.

That same year, Walken received a warmer reception for his starring role in The Dogs of War, playing a mercenary mixed up with an African dictator. After such serious roles, Walken surprised moviegoers with his tap-dance routine in the Steve Martin musical comedy Pennies from Heaven (1981). His move from arresting dramatic fare to lighthearted romp exemplified Walken's versatility as an artist and ability to unexpectedly captivate audiences in a distinctive way.

Cementing his reputation as a top-notch bad guy, Walken starred in A View to a Kill (1985) as the latest villain to take on super spy James Bond (played by Roger Moore). He then paired up with another intriguing actor, Sean Penn, for the crime drama At Close Range (1986). As critic Roger Ebert enthused about Walken's performance, "there is nobody to touch him for his chilling ability to move between easy charm and pure evil."

Walken rounded out the decade playing a crook in Homeboy and then a man who's abducted by aliens in Communion (1989). In 1990, he starred in King of New York, a crime drama co-starring Laurence Fishburne, with Walken playing a freed drug kingpin who plots to give his ill-begotten earnings to build a hospital for the poor. He then turned in a memorable performance as an evil businessman in Batman Returns (1992), opposite Michael Keaton as the Dark Knight and Michelle Pfeiffer as Catwoman.

In True Romance (1993), Walken again made the most out of a smaller part. The film starred Christian Slater and Patricia Arquette as Clarence and Alabama, a couple on the run from the mob. Walken starred in one of the film's memorable scenes as a hitman trying to get some answers out of Clarence's dad (played by Dennis Hopper).

The following year, Walken gave another strong performance in Quentin Tarantino's Pulp Fiction (1994). He described the experience to Esquire magazine, saying, "Movie scripts are usually pretty loose—things change a lot. But not with Quentin. His scripts are absolutely huge. All dialogue. It's all written down. You just learn the lines. It's more like a play."

In 1991, Walken garnered his first Emmy Award nomination for Outstanding Lead Actor in a Miniseries or Special for his work on Sarah, Plain and Tall. He starred opposite Glenn Close as a widower who solicits a new wife to help raise his two children.

Despite being often cast as edgy characters, Walken has also displayed a great sensibility for comic roles. He's been a popular guest host of the late night comedy series Saturday Night Live, appearing on the show multiple times, as well as a target for spoofs and satire. Numerous comedians have been known to imitate his unusual cadence. (His manner of speech was in fact the subject of an SNL skit which focused on an imaginary Walken family reunion.)

"I think my rhythm is a bit like someone whose first language isn't English. I could get away with being a German commandant and not really have to do a lot of accent, because I already sound like I don't speak English that well," he told Entertainment Weekly.

Second Oscar Nod for 'Catch Me If You Can'

Walken reminded movie-goers of his immense talent in Steven Spielberg's Catch Me If You Can (2002). The film tells the true-life story of a young con artist (played by Leonardo DiCaprio) named Frank Abagnale Jr. Walken gave a subtle performance as Frank's father, which earned him his second Academy Award nomination for Best Supporting Actor.

With previews beginning in late 1999, Walken returned to Broadway with the musical James Joyce's The Dead. He later earned a Tony Award nomination for his work in the production. (Walken had continued to work on Broadway from the mid-1960s into the '80s, with projects that included The Merchant of Venice and Hurlyburly.)

He became part of pop music history in 2001 by starring in the music video for Fatboy Slim's "Weapon of Choice." The clip was directed by Spike Jonze, and Walken was able to charm audiences with his dance skills once again, gliding across a deserted hotel lobby in a routine he partially choreographed.

After making a splash in the 2007 movie-musical Hairspray, as the husband of a gender-bending John Travolta, he returned to the Broadway stage in 2010 with A Behanding in Spokane. The summer of 2014 saw Walken appearing in two music-related projects: Clint Eastwood's film adaptation of Broadway's Jersey Boys and the television broadcast of Peter Pan Live!, with Walken getting top billing as Captain Hook.

Known to work constantly, Walken takes on a wide variety of films. He explored the horror genre with The Prophecy trilogy (1995-2000), playing the archangel Gabriel, and in 1999 he played the Headless Horseman opposite Johnny Depp in Tim Burton’s Sleepy Hollow.

The actor has appeared in more than his fair share of duds, such as the crime drama Things to Do in Denver When You're Dead (1995); the low-brow comedy Joe Dirt (2001); and the family friendly flop The Country Bears (2002).

Still clicking with audiences, Walken appeared in such comedies as the box-office hit Wedding Crashers (2005), Click (2006), with Adam Sandler, and the ping-pong farce Balls of Fury (2007).

Walken followed with The Maiden Heist (2009), also featuring Morgan Freeman and William H. Macy, and then co-starred in Todd Solondz's Dark Horse (2011). Again showing his capacity for villainy, he played crime men in both Kill the Irishman (2011) and Stand Up Guys (2012), the latter featuring Al Pacino and Alan Arkin, and was seen as a dognapping schemer in Seven Psychopaths (2012). In 2016, the actor provided the voice of King Louie for an updated version of Disney's The Jungle Book.

When he is not on stage or on set, Walken lives in Wilton, Connecticut, with his wife.