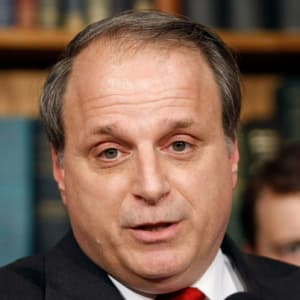 Former U.S. Representative Eric Massa served just over a year in the House before he was accused of sexual misconduct with a male staffer.

Eric Massa served in the U.S. Navy for over 20 years before a bout with cancer sent him back to shore, where he got a job with the House Armed Services Committee. Massy then ran for a New York congressional seat, winning on his second try in 2008. He rented a house in Washington with five male staffers, and was accused of inappropriate sexual remarks and conduct. Eric Massa resigned in 2010.

Former U.S. Representative. Born September 16, 1959, to an Italian-American family in Charleston, South Carolina. Massa's father Emiddio was a career U.S. Naval officer. The family moved frequently due to his father's career, making stops in Argentina and New Orleans, where Eric Massa attended high school. After graduation, Massa enrolled in the U.S. Naval Academy in Annapolis, Maryland. He graduated in 1981, and his naval career would last until 2004, including service in the first Persian Gulf War and work as an aide to former NATO Supreme Allied Commander General Wesley Clark.

Massa was diagnosed with non-Hodgkin's lymphoma in the 1990s and returned to the U.S. for treatment. He was declared cancer-free in 1999. After his retirement from active duty, he and his wife Beverly settled in the town of Corning, New York, with their three children.

In 2003, Massa's military contacts helped him find a job as a Republican staffer on the House Armed Services Committee. Massa later left both the position and the Republican Party over disagreements with President George W. Bush's handling of the Iraq War. Massa turned to the Democratic Party, and decided to run for Congress. In 2006, he lost his first political campaign, narrowly losing to incumbent Representative Randy Kuhl in New York's heavily Republican 29th District. Two years later, Massa tried again, winning Kuhl's seat in the same Democratic election that delivered Barack Obama to the White House. As a freshman representative and veteran, Massa was given a seat on the House Armed Services Committee. In Washington, he moved into a house with five young unmarried male staffers, a move he said was necessary since he couldn't afford his own home in the capitol.

On March 5, 2010, just over a year into his term, Eric Massa abruptly announced his resignation from Congress, effective March 10. He cited two reasons for his departure: the return of his cancer, and an ongoing investigation by the House ethics committee into allegations that he had made inappropriate sexual comments to a staffer. Massa claimed he had been unaware of the complaint or the investigation, but said in a statement, "I did in fact use language in the privacy of my own home and in my inner-office that after 24 years in the Navy might make a chief petty officer feel uncomfortable. In fact, there is no doubt that this ethics issue is my fault and mine alone."

In the days following his announcement, Massa gave a series of curious and conflicting television and radio interviews. At first he confirmed that he had groped, tickled and made lewd comments to male staff members, but said the behavior was "nothing sexual" and that the Democratic Party was trying to force him out of office because of his opposition to President Barack Obama's health care bill. His behavior toward aides, he said, was all in good fun. "Now they are saying I groped a male staffer," he told cable talk show host Glenn Beck. "Yeah, I did. Not only did I grope him, I tickled him until he couldn't breathe, and then four guys jumped on top of me. It was my 50th birthday. It was kill the old guy. You can take anything out of context."

In interviews made just hours later, however, Massa retracted his statements, claiming he never groped anyone. When cable talk show host Larry King asked if he was gay, Massa responded, "ask my wife, ask my friends, ask the 10,000 sailors I served with in the navy."

Massa drove himself home to Corning after leaving Congress, later telling a journalist that he contemplated killing himself in the car twice on the way home. Massa continues treatment for his cancer and has retired, at least temporarily, from public life.