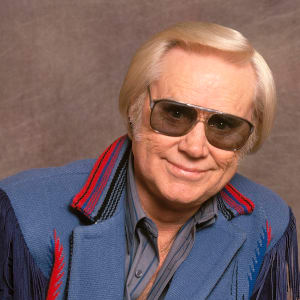 Country singer and songwriter George Jones was born into poverty, but became a successful musician later in life. His first hit was the 1955 song “Why Baby Why.”

George Jones was born in Saratoga, Texas, in 1931. He began his career by performing on the street to help earn money for his large and impoverished family, and after a brief stint in the military began to pursue his musical ambitions in earnest. In 1955 Jones landed in the country Top Ten with "Why Baby Why," and for the rest of his career was very rarely far from the charts, releasing hit single after hit single as a solo artist and as a duet partner with some of country’s biggest stars, most notably Tammy Wynette, who was also his third wife. Battling his personal demons along the way, Jones amassed an impressive musical legacy that earned him a 2012 Grammy Lifetime Achievement Award, among many other honors. He died in 2013, at the age of 81.

George Glenn Jones was born in Saratoga, Texas, on September 12, 1931. One of eight children in a poor family, his father was an alcoholic who sometimes grew violent. "We were our daddy's loved ones when he was sober, his prisoners when he was drunk," Jones later wrote in his autobiography, I Lived to Tell It All. But despite these hardships, Jones and his family members shared a love of music, often singing hymns together and listening to records by the likes of the Carter Family. They also enjoyed listening to the radio, tuning into programs from the Grand Ole Opry.

When Jones was nine his father bought him his first guitar, and when he began to display an early talent, he was sent out to the streets to perform and help earn money for the family. By his early teens he found himself playing in the dive bars of Beaumont, Texas, as well, and at age 16 he left home for Jasper, Texas, where he worked as a singer at local radio station KTXJ and nurtured his admiration for the music of Hank Williams. Jones returned to Beaumont a few years later, and in 1950 he married Dorothy Bonvillion. The couple had a daughter, Susan, shortly thereafter, but their union was short-lived, at least in part because of the explosive temper and fondness for drink that Jones had inherited from his father.

What Am I Worth?

After their divorce, Jones joined the U.S. Marines and served during the Korean War. However, he was never sent overseas, instead finding himself stationed in San Jose, California, where he continued to indulge his love of music by performing in the city’s bars. When he completed his military service in 1953, Jones continued to indulge his passion and was soon discovered by producer Pappy Daily, co-owner of Starday Records. Daily quickly signed Jones to a recording contract and became his producer and his manager—a partnership that would last for years.

In 1954, Jones married Shirley Ann Corley, with whom he had two sons, Jeffrey and Brian. His musical endeavors that year were less successful, however, with his first four singles failing to gain any notice. But Jones would experience a reversal of fortunes in 1955 when he made No. 4 on the country charts with "Why Baby Why,” an up-tempo rumination on heartbreak. On the heels of that first success, more hits followed, including "What Am I Worth" (1956), "Just One More" (1956) and “Don’t Stop the Music” (1957), each of which reached the country Top 10. Jones closed the decade with his first No. 1 single, the comical "White Lightning," which also managed to cross over into the pop charts (No. 73).

The Crown Prince of Country Music

With his songs of heartbreak, by the early 1960s, Jones had established himself as one of country music’s top singer as he continued to find chart success with singles such as "Window Up Above" (1960; No. 2) and the No. 1 hit "Tender Years" (1961). In 1962 the balladeer again returned to the top of the charts with what is regarded as one of his trademark tunes, "She Thinks I Still Care," and the following year teamed up with Melba Montgomery for the first of several albums, What’s in Our Heart, which reached No. 3 on the charts and proved to be their most successful collaboration.

But Jones maintained a presence on the charts on his own as well, scoring Top 10 hits with the 1964 single "The Race Is On" (No. 3) and 1965’s “Love Bug” (No. 6). The latter half of the 1960s was much the same for Jones, with both his solo efforts and his collaborations meeting enthusiastic reception. Among his notable tracks from this period are the singles “I’m a People” (1966) and “As Long As I Live” (1968), as well as the 1969 duet album with Gene Pitney, I’ll Share My World with You, featuring the No. 2 charting song of the same name.

Meanwhile, Jones’s personal life was once more in turmoil. Due to his ongoing substance abuse, his second marriage had already begun to deteriorate, but when he met and fell in love with fellow country star Tammy Wynette its fate was sealed. Jones and Shirley divorced in 1968, and the following year Jones married Wynette. More than just a romantic union, in 1969 the newlyweds began to make music together as well. Breaking ties with Pappy Daily, Jones also began working with one of Wynette’s producers, Billy Sherrill, who added a certain polish to Jones's sound.

Jones and Wynette’s partnership began auspiciously enough, with a number of their duets—including “The Ceremony” and “Take Me” reaching the Top Ten. They both continued to do well on their own too, with Jones releasing several top-charting singles. Around this time Wynette also gave birth to their daughter, Tamala Georgette, and by all outward appearances, Jones and Wynette were the era’s reigning king and queen of country.

Behind the scenes, however, Jones battled continued to battle with drug and alcohol abuse, and his relationship with Wynette turned tense and combative. In 1973 things reached their breaking point and Wynette filed for divorce. The couple attempted to reconcile, and released the single "We're Gonna Hold On" (1973), but while the song was a success, making it to the top of the country charts, Jones and Wynette’s marriage continued to decline. Jones's heartache seemed to seep out on his 1974 solo hit, "The Grand Tour," a gut-wrenching ballad about the end of a marriage. He and Wynette divorced the following year. Despite their separation, however, Jones and Wynette would continue to work together from time to time, recording hits such as the No.1 singles "Golden Ring" and “Near You.”

By the mid-1970s, Jones was falling apart both physically and emotionally, as the years of drinking and drug abuse began to take their toll. He became unreliable and unpredictable, disappearing for days without any notice and failing to show up for numerous recording sessions and concerts. His cocaine use also resulted in Jones dropping a substantial amount of weight, rendering him a mere shadow of his former self.

But despite these dark times, Jones continued to make interesting music. In 1978 he recorded the popular duet "Bartender's Blues" with folk singer James Taylor, and the following year he released the duet album My Very Special Guests, a somewhat ironic title in hindsight, considering that Jones was rarely present when his companions recorded their vocals. Jones returned to the top of the charts with 1980's "He Stopped Loving Her Today," from the album I Am What I Am—Jones's biggest seller to that point—and in 1982 he teamed up with country legend Merle Haggard for A Taste of Yesterday's Wine. Other chart successes from this period include the duet (with Wynette) “Two Story House” (1980) and the No. 1 singles “Still Doin’ Time” and “I Always Get Lucky with You.”

Following a series of much publicized run-ins with the law that culminated in his arrest for drunk driving, Jones finally began to repent his self-destructive ways. He married Nancy Sepulvado in March 1983 and later said that it was her love that had helped him straighten up. He also released numerous successful duets around this time, among them "Hallelujah, I Love You So" with Brenda Lee and "Size Seven Round (Made of Gold)" with Lacy Dalton. As a solo artist, he kept pace with popular singles from his 1985 album Who's Gonna Fill Their Shoes, including its title track, which reached No. 3 on the charts. His last solo Top 10 country hit would come in 1989 with "I'm a One Woman Man" (No. 5).

Though he remained a darling of country music critics in the 1990s and was inducted into the Country Music Hall of Fame in 1992, George Jones seemed to be pushed off the radio by a new generation of country stars—including the likes of Garth Brooks, Tim McGraw and Shania Twain—who produced a slicker, more pop-influenced sound. However, though Jones may not have been generating hit singles, he continued to put out strong-selling albums in that decade, including a 1995 reunion with Wynette for the album One. Around this time, Jones also gave the public an inside view at all of his troubles and triumphs with his autobiography, I Lived to Tell It All (1996).

At the end of the decade, Jones broke back into the country album charts Top 10 with The Cold Hard Truth. But around that same time it appeared that he had also suffered a relapse that resulted in him getting into a serious car accident while intoxicated. Jones later credited that incident with finally straightening him out for good.

In recognition of his more than half-century-long career, in 2002 Jones received the National Medal of the Arts. In 2006 he reunited with Merle Haggard for Kickin' Out the Footlights . . . Again and that same year was the focus of the tribute album God's Country: George Jones and Friends, with Vince Gill, Tanya Tucker and Pam Tillis among the artists covering some of Jones's biggest hits. In 2008, Jones released Burn Your Playhouse Down, a collection of previously unreleased duets with Dolly Parton, Keith Richards and Marty Stuart, among others.

In his later years, Jones continued to maintain a rigorous tour schedule, playing numerous dates across the country, and in 2012 he garnered one of the greatest honors of his career: a Grammy Lifetime Achievement Award.

The Window Up Above

George Jones died on April 26, 2013, at Vanderbilt University Medical Center in Nashville, Tennessee, where the 81-year-old had reportedly been hospitalized with irregular blood pressure and a fever just a week earlier.

With a career spanning more than 50 years, Jones is regarded as one of country music’s all-time greatest stars. His clear, strong voice and ability to convey so many emotions won over thousands of fans, as well as earning him the envy of his peers. As fellow country star Waylon Jennings once said, "If we could sound the way we wanted, we'd all sound like George Jones."

In 2016 it was announced that a new biopic about George Jones was in the early stages of production. The film, titled No Show Jones and scheduled for a 2017 release, features Josh Brolin as Jones and Jessica Chastain in the part of Tammy Wynette.