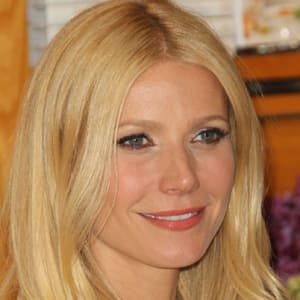 Gwyneth Paltrow is an American actress known for such films as ‘Se7en,’ ‘Emma’ and ‘Great Expectations.’ In 1999, she won an Academy Award for her role in ‘Shakespeare in Love.’

Who Is Gwyneth Paltrow?

Gwyneth Paltrow, the daughter of Tony Award-winning actress Blythe Danner and television producer Bruce Paltrow, began acting as a child. In 1995, she appeared in the controversial film Se7en, alongside Morgan Freeman and Brad Pitt. From there, Paltrow won starring roles in a string of films including Emma (1996), Great Expectations (1998) and A Perfect Murder (1998). In 1999, she won an Oscar for Best Actress for her role in Shakespeare in Love. Paltrow later appeared in Iron Man (2008) and other films from the Marvel franchise, and was married to Coldplay frontman Chris Martin from 2003 to 2016.

Gwyneth Kate Paltrow was born on September 27, 1972, in Los Angeles, California. The daughter of Tony Award-winning actress Blythe Danner and television producer Bruce Paltrow, Paltrow grew up no stranger to the world of Hollywood. After living in Los Angeles, Paltrow moved with her family to New York at age 11. The precocious young blonde made her stage debut at just 5 years old in a theater in Massachusetts' Berkshire Mountains, where her mother performed in summer stock.

As she grew up, Paltrow's burgeoning beauty and developing acting talent began to win her small film roles, beginning with Shout and Hook in 1991. After a well-received spot opposite her mother on the television miniseries Cruel Doubt (1992), Paltrow decided to abandon her art history studies at the University of California at Santa Barbara to pursue acting full time.

The decision paid off—Paltrow won a string of roles in films like Malice (1993), co-starring Nicole Kidman and Alec Baldwin, Flesh and Bone (1993) and Jefferson in Paris (1995), co-starring Nick Nolte. In 1995, Paltrow appeared in the controversial film Se7en, with Morgan Freeman and Brad Pitt.

A romance with the latter helped propel Paltrow into the headlines, just as she began to win starring roles in The Pallbearer (1996), Emma (1996), Great Expectations (1998), Sliding Doors (1998) and A Perfect Murder (1998), with Michael Douglas. Paltrow confirmed her superstar status with an inspired performance in 1998's Shakespeare in Love, as the immortal Bard's purported muse. The role won her a Best Actress Oscar and made her one of Hollywood's most sought-after female performers.

The willowy blonde also made a name for herself in the gossip columns with much-publicized relationships and break-ups with both Pitt and Ben Affleck, the Oscar-winning co-screenwriter of Good Will Hunting (1997). Affleck also appeared (in a relatively small role) in Shakespeare in Love. He and Paltrow broke up amicably in early 1998 after a yearlong romance.

In 1999, Paltrow starred with Matt Damon in director Anthony Minghella's lush production of The Talented Mr. Ripley, a novel by Patricia Highsmith. In 2000, she starred in the karaoke comedy-drama Duets, directed by her father, Bruce Paltrow, and the romance Bounce, opposite Affleck.

In late 2001, Paltrow donned an unflattering fat suit for some of her scenes in the crude comedy Shallow Hal, co-starring Jack Black and directed by Peter and Bobby Farrelly. She also joined an all-star cast, including Gene Hackman, Anjelica Huston, Ben Stiller, Bill Murray, Danny Glover and Luke and Owen Wilson, in The Royal Tenenbaums, directed by Wes Anderson. In 2002, she starred in the screen adaptation of Possession, as well as in Miramax's romantic spoof A View From the Top.

Following her 1998 Academy Award win, Paltrow took part in several less than memorable roles. In 2003, Paltrow played in the biopic Sylvia, the story of the talented poet and author Sylvia Plath, as the main character. The film failed to live up to the hype and flopped at the box office. A string of less popular films followed, including Running with Scissors (2003), Proof (2005) and Infamous (2006). She even tried her hand at directing in 2005 with the short film Dealbreakers.

In 2008, Paltrow launched her lifestyle website GOOP, which sends out a weekly newsletter on a range of topics, from parenting to fashion tips. That year, she also joined the ranks of A-listers making the leap to movies based on comic books, appearing in Iron Man as Pepper Potts, opposite Robert Downey Jr.'s Tony Stark. The film earned rave reviews and garnered the highest box office numbers of any film involving the actress to date.

Paltrow reprised her roles in the second and third Iron Man films, released in 2010 and 2013, respectively, as well as in other related features from the Marvel franchise, including The Avengers (2012) and Spider-Man: Homecoming (2017). During that period, she also appeared in films like the drama Country Strong (2010) and the comedy Mortdecai (2015), alongside Johnny Depp.

In October 2002, while vacationing in Italy to celebrate her 30th birthday, Gwyneth's father, Bruce, succumbed to complications from pneumonia after a battle with throat cancer.

In March 2014, via her website GOOP, Paltrow announced that she and Martin had separated: "It is with hearts full of sadness that we have decided to separate," she stated. "We have been working hard for well over a year, some of it together, some of it separated, to see what might have been possible between us, and we have come to the conclusion that while we love each other very much, we will remain separate." Their divorce was finalized in 2016.

Meanwhile, Paltrow began dating Glee co-creator Brad Falchuk. In January 2018, the couple announced their engagement. "We feel incredibly lucky to have come together at this juncture in our lives, when our collective successes and failures can serve as building blocks for a healthy and happy relationship," Paltrow and Falchuk said in a joint statement.