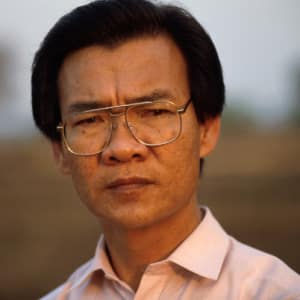 Actor Haing S. Ngor endured persecution and numberous atrocities under the Khmer Rouge before moving to the U.S. and starring in The Killing Fields.

Born in Cambodia in 1940, physician Haing S. Ngor endured numerous atrocities under rule of Pol Pot and the Khmer Rouge before moving to the U.S. and starring in The Killing Fields. He later co-wrote a book, Haing Ngor: A Cambodian Odyssey, about life under the Khmer Rouge.

Physician, actor. Born March 22, 1940 in Cambodia. A survivor of the Cambodian holocaust, Ngor was forced to stand by while his wife My-Huoy died in childbirth in their concentration camp. Though he was an obstetrician and gynecologist, he survived only by hiding that fact since all educated persons and professionals were killed under the Khmer Rouge. After the regime collapsed in 1979, Ngor escaped to Thailand where he worked as a doctor in a refugee camp before relocating to the United States in 1980.

In 1984, art imitated life when Ngor portrayed journalist and refugee Dith Pran in 1970s Cambodia in the movie The Killing Fields. He won an Oscar for Best Supporting Actor for his performance in 1985. After the release of the film, he co-wrote Haing Ngor: A Cambodian Odyssey, which described life under the Khmer Rouge. He appeared in other films, mostly fact-based movies about Southeast Asian conflict, throughout his life.

In 1996, Ngor was shot and killed outside his apartment in Los Angeles, California, during a robbery by members of a street gang.