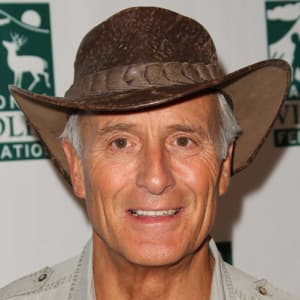 Jack Hanna was born in Knoxville, Tennessee on January 2, 1947. He opened a pet store after college and became Columbus Zoo's executive director in 1978. He began making TV appearances with zoo animals in the 1980s, appearing on shows like The Late Show with David Letterman and Larry King Live. Although he left his position as executive director of the Columbus Zoo in 1992, he continues his mission to care for and educate people about exotic and wild animals.

Zoo director, author, television personality and correspondent Jack Bushnell Hanna was born on January 2, 1947, in Knoxville, Tennessee. He is one of the best known American animal experts, often appearing with wild creatures on a number of television shows, including his own, Jack Hanna's Animal Adventures. His love of animals started at young age with a job working for a local veterinarian.

Hanna attended Muskingum College in New Concord, Ohio, where he met his wife Suzi. Some time after graduation, the couple opened a pet store in his hometown of Knoxville. In 1973, Hanna landed his dream job; he became a director at the Central Florida Zoo. Five years later, he took on another challenge, working as the executive director of the Columbus Zoo. At the time, the zoo wanted to attract more visitors, and the facilities needed to be revamped. Hanna helped raise the necessary funds as well as the zoo's public profile.

In the 1980s, Hanna became nationally known for his appearances on television. In 1983, he was a guest on Good Morning America. Viewers enjoyed watching him and learning about the interesting animals he brought with him so much that he became a regular guest and correspondent for the show. Two years later, he started visiting The Late Show with David Letterman regularly. In 1988, Hanna joined Larry King Live as a regular guest. That same year, he published his first book, Monkeys on the Interstate, in which he shared many stories about his adventures with animals and his work with the Columbus Zoo. Since then he's published nearly a dozen more books: Let’s Go to the Petting Zoo with Jack Hanna (1991), Jungle Jack Hanna’s Safari Adventure, Jungle Jack Hanna’s Pocketful of Bugs, Jack Hanna’s Ultimate Guide to Pets (all 1996), What Zookeepers Do (1998), Wild About Babies (2004), Romp, Stomp, Waddle Home, Passport Into the Wild, Jungle Jack: My Wild Life (all 2008) and Wackiest, Wildest, Weirdest Animals of the World (2009).

Due to the demands of his busy schedule, Hanna stepped down from running the day-to-day operations of the zoo in 1992 and became its director emeritus. After years of being a guest on many shows, he hosted his own syndicated program in 1993. Still popular in reruns, Jack Hanna's Animal Adventures has been on the air for more than 20 years.

Hanna also continues to be a regular guest on numerous television talk shows such as Good Morning America, Anderson Cooper 360, CBS This Morning, The Late Late Show with James Corden, and The Ellen DeGeneres Show, as well as serving as a wildlife correspondent for FOX News.

In 2007, he teamed up with Natalie Portman for an Animal Planet documentary called Saving a Species. The show took the pair to Rwanda’s Volcanoes National Park where they educated audiences about endangered mountain gorillas. Hanna and his wife purchased a home in Rwanda in the early 1990s. Today the family rents out Gorilla's Nest / Jack Hanna Cottage to tourists visiting the country.

Also in 2007, Hanna launched a series called Into the Wild, which features him exploring exotic locales and the native wildlife. The series has earned him three Emmys. His television show Jack Hanna’s Wild Countdown debuted in 2011.

In addition to his television work, Hanna serves as an Honorary Director of Canine Companions for Independence, an organization that helps provide service dogs to people with disabilities.  Additionally, he worked with Big Cat Rescue to help draw attention to abused and abandoned big cats. Hanna also has received several honorary degrees for his work.

Hanna and his wife Suzi married in 1968 and have three daughters, Kathaleen, Suzanne and Julie. His youngest daughter Julie is following in her father's footsteps and works for the Columbus Zoo.