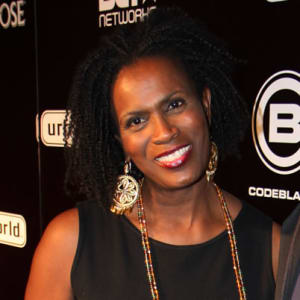 Janet Hubert is a stage, TV and film actress known for her role as Vivian Banks on The Fresh Prince of Bel-Air.

Janet Hubert was born on January 13, 1956, in Chicago, Illinois, and studied at the Juilliard School in New York City. She had a stage career before moving to TV and landing the role of Vivian Banks on The Fresh Prince of Bel-Air for several seasons. She’s also starred in the daytime dramas All My Children and One Life to Live in addition to writing her 2009 memoir.

Born on January 16, 1956, in New York City, actress Janet Hubert-Whitten is best known for playing the upper-class Aunt Viv on the hit comedy series Fresh Prince of Bel-Air. She spent her early days growing up on Chicago's South Side. At the age of 9, she moved with her family to a rural Illinois town. Hubert-Whitten won a scholarship to the famed Juilliard School in New York City, but the transition from small town to big city proved to be too much for her. She went home after a year.

Returning to New York, Janet Hubert-Whitten joined the Alvin Ailey Dance Company. She also landed acting work on daytime television and on stage. In the 1980s, she was Betty Buckley's understudy for Grizabella in the musical Cats for a time. But her biggest break came as part of the cast of the sitcom Fresh Prince of Bel-Air, starring hip-hop recording artist Will Smith (as a character named Will Smith). Much of the humor of the show was the class and culture clash between Smith, a streetwise teen from Philadelphia, and his upper-class aunt, uncle and cousins living in one of California's richest, most elite neighborhoods. Hubert-Whitten played Vivian Banks, aunt to Smith, wife to Philip, and mother to Carlton, Hilary and Ashley.

Contentious Leave of the Series

In 1993, Janet Hubert-Whitten was dismissed from the show, not long after the birth of her first child. The producers said that they were unable to reach a contract agreement. But she countered, saying that was forced off the show after she announced her pregnancy with the producers cutting her number of episodes and salary. Hubert-Whitten threatened to take legal action. Daphne Maxwell Reid took over the role of Vivian for the show's remaining seasons.

Since then, Janet Hubert-Whitten has appeared on such shows as Gilmore Girls, Friends and The Bernie Mac Show among others.