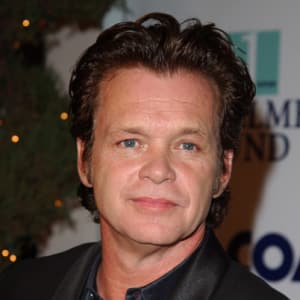 A pop sensation in the 1980s, singer-songwriter John Mellencamp has evolved into one of rock’s most enduring acts, and given voice to the small-town experience.

Born in 1951 in Seymour, Indiana, John Mellencamp began his musical career in the mid-1970s as Johnny Cougar. His breakthrough 1982 album, American Fool, featured the No. 1 track "Jack & Diane," and throughout the decade he cemented his popularity through hits like "Pink Houses and "Small Town." Mellencamp continued churning out music as his sound matured, returning to the spotlight in 2007 with his album Freedom's Road. Elected to the Rock and Roll Hall of Fame the following year, he continues to release new material and tour regularly.

John Mellencamp was born on October 7, 1951, in Seymour, Indiana. A pop sensation in the 1980s, John Mellencamp has evolved into one of rock’s most enduring acts. He often give voice to the American small-town experience in his music—something he knows quite well from his childhood in Seymour.

Mellencamp, who recovered from neonatal surgery to correct a spinal defect, developed an early interest in music. He started playing in a cover band called Crepe Soul in his early teens. With a rebellious streak, Mellencamp hung out with his friends and partied instead of paying much attention to his schooling. His disciplinarian father, an executive with a local electronics firm, tried to motivate him to pursue athletics and his studies, with little luck. At the age of 18, Mellencamp eloped with his pregnant 21-year-old girlfriend, Priscilla Esterline. The couple soon welcomed a daughter, Michelle.

Mellencamp enrolled at Indiana's Vincennes University and attempted to gain steady employment before returning to his music. He recorded several demos of his songs and brought them to New York City to launch his career. After several misfires, the burgeoning musician landed a manager, Tony DeFries, who had worked with the likes of David Bowie. DeFries decided to change Mellencamp’s last name to Cougar, believing that it made him more appealing to the record-buying public. Mellencamp was not pleased with this decision and would later return to his birth name.

The first Johnny Cougar album, Chestnut Street Incident, was released by MCA in 1976, but failed to sell many copies. Derided by critics, Mellencamp was viewed by some as a lesser version of Bruce Springsteen or Bob Seger. MCA never released his second album and dropped him from the label, and Mellencamp soon parted ways with DeFries, as well.

Mellencamp’s fortunes eventually improved. His single "I Need a Lover" became a hit in Australia in 1978, and then a Top 30 track in the U.S. upon its release with the John Cougar album in 1979. His next effort, Nothing Matters and What If It Did (1980) had two successful singles, “This Time” and “Ain’t Even Done With the Night.”

While his career was gaining traction, Mellencamp was going through some changes in his personal life. His first marriage ended in divorce, and he wed Vicky Granucci in 1981. The couple had two daughters, Teddi Jo and Justice, before divorcing in 1989.

Mellencamp’s big breakthrough came in 1982 with the chart-topping album American Fool. His ode to a young couple in middle America, “Jack & Diane,” reached the top of the pop charts. For “Hurts So Good,” another hit from the album, Mellencamp won the Grammy Award for Best Rock Vocal Performance, Male. The videos for both songs were often played on MTV, further boosting the artist's popularity.

The following year, Mellencamp enjoyed more commercial success with Uh-Huh, which became a Top 10 album on the strength of three hit singles: “Crumblin’ Down,” “Pink Houses” and “Authority Song.” Now calling himself John Cougar Mellencamp, he was also garnering stronger critical acclaim for his songwriting abilities.

Mellencamp's next album, the widely acclaimed Scarecrow (1985), featured a mixture of styles, from the uptempo “R.O.C.K. in the U.S.A (A Salute to 60's Rock)” to the more introspective “Small Town,” to the stormy dirge “Rain on the Scarecrow,” which explored the plight of the family farmer. This subject was especially close to his heart: A co-founder of Farm Aid, an organization dedicated to supporting American family farms, Mellencamp helped organize its first concert in 1985 and remained active on the charity's board.

Mellencamp continued to mature as an artist with his next recording, The Lonesome Jubilee (1987), which featured some experimentation with a folk rock-type sound. Three tracks from the album—“Paper in Fire,” “Cherry Bomb,” and “Check It Out”—reached the Top 20 of the pop charts.

Mellencamp's following albums remained strong sellers, though he delivered fewer singles that made it onto the charts. Big Daddy (1989) had the self-satirizing hit “Pop Singer,” while Whenever We Wanted (1991) featured “Get a Leg Up.” For the artist, the making of the album was a life-changing event: Not only was it his first release under his given name of John Mellencamp, it also allowed him to meet model Elaine Irwin, who was featured on the album cover and in the video for "Get a Leg Up." The couple married in 1992, and went on to have sons Hud and Speck.

Around this time, Mellencamp tried his hand at acting. He directed and starred in the feature Falling from Grace (1992), a semi-autobiographical drama about a successful musician returning to his small-town roots. The screenplay was written by famed Western novelist Larry McMurtry.

Continuing with his music, Mellencamp delivered Human Wheels (1993), scoring solid radio play with its title track and "What if I Came Knocking." His next release, Dance Naked (1994), featured his biggest hit in years, a cover of Van Morrison's "Wild Night" with singer Meshell Ndegeocello. However, that year Mellencamp had to abruptly cancel a tour after suffering a heart attack. This health crisis led to some lifestyle changes for the artist, who curbed a serious nicotine habit and began exercising. “I didn’t work out at all until I had the heart attack,” he later told People magazine.

While no longer a mainstay on the pop charts, the artist continued churning out music that reflected his musings on life and middle age via the albums John Mellencamp (1998), Rough Harvest (1999) and Cuttin' Heads (2001). He was also honored for his impressive body of work with the 2001 Billboard Century Award. "John Mellencamp is arguably the most important roots rocker of his generation," said Billboard editor-in-chief Timothy White. "Mellencamp's best music is rock 'n' roll stripped of all escapism, and it looks directly at the messiness of life as it's actually lived."

The release of a greatest hits album in 2005 seemed to herald a return to the pop culture spotlight, and in 2007 Mellencamp capitalized on the momentum with the unveiling of Freedom’s Road. Debuting at No. 5 on the Billboard charts, Freedom's Road included the ubiquitous single "Our Country," which was featured in a series of Chevrolet commercials and earned a Grammy nomination.

In 2008, he found his music caught up in the midst of the election-year politics. A well-known Democratic supporter, Mellencamp had his representatives ask Republican presidential candidate John McCain to stop playing his songs “Our Country” and “Pink Houses” during his rallies, according to People magazine.

That March, Mellencamp was inducted into the Rock and Roll Hall of Fame, an occasion he punctuated with a rousing rendition of "Authority Song," featuring his son Speck on guitar. Not content to rest on past accomplishments, he then followed with another acclaimed album, Life, Death, Love and Freedom.

While touring with Bob Dylan and Willie Nelson in 2009, Mellencamp recorded new songs at a series of historic locations in the South, including the First African Baptist Church in Savannah, Georgia, and Sun Studio in Memphis, Tennessee. The result was the stripped-down and earnest No Better Than This, which was released in August 2010 to strong reviews. Late that year, he announced he was separating from wife Elaine, and the divorce was finalized the following summer.

With decades of popular music success behind him, Mellencamp proved willing to explore new frontiers. A long-planned collaboration with novelist Stephen King finally came together in 2012, when the production of Ghost Brothers of Darkland County began its run at the Alliance Theatre in Atlanta, Georgia. Mellencamp wrote the songs for this Southern Gothic musical, about a pair of bickering siblings and the spirits that haunt their family.

Around this time, Mellencamp also revealed his talents as a painter to a wider audience. Having devoted more energy to this hobby in recent years, he compiled a collection that led to his first exhibition, Nothing Like I Planned: The Art Of John Mellencamp, at the Tennessee State Museum in Nashville in 2012. In subsequent years, his works were also exhibited at galleries in Georgia, Ohio and New York City.

Still, there was plenty of new music to create. In 2014, Mellencamp released his first studio album in four years, the folk-and-blues infused Plain Spoken. The tireless rocker went on tour to support the album, its final leg winding down in the fall of 2016.

In recent years, Mellencamp has been romantically linked to actress Meg Ryan and supermodel Christie Brinkley. Forever the small-town boy, he continues to live in Indiana.