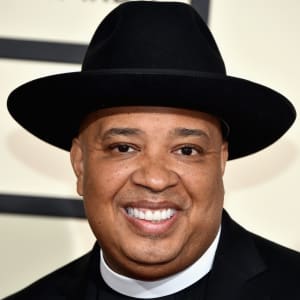 Joseph “Run” Simmons was a member of the pioneering rap group Run-D.M.C. He’s now an ordained minister who goes by the name Rev. Run.

Who Is Joseph 'Reverend Run' Simmons?

Born and raised in Queens, New York, Joseph “Run” Simmons formed the pioneering rap group Run-D.M.C. with Darryl “D.M.C.” McDaniels and Jam Master Jay. Exploding onto the music scene in 1983, the group ushered hip-hop into the mainstream. In his solo career, Simmons has taken many turns, from musical artist to ordained minister to reality-show star to self-help author.

Joseph Ward Simmons, known also as Reverend Run and DJ Run, was born November 14, 1964, in Queens, New York and was raised in the middle-class neighborhood of Hollis. He is the younger brother of painter Danny Simmons and Russell Simmons, an entertainment entrepreneur and founder of Def Jam Recordings. His father, Daniel, worked as an attendance supervisor for the borough’s school system and later as a professor.

Simmons’ start in music came in 1978, when he was a deejay for Kurtis Blow, one of rap’s early pioneers, whom Simmons’ brother Russell had started managing. Because of his quick ability to cut between two turntables, Simmons earned the nickname DJ Run.

As his stage confidence grew, Simmons began stepping up behind the mic and engaging in verbal duels with Blow. He then played recordings of the performances for his high school friend Darryl McDaniels (aka DMC), and the two decided to form a rap duo. They then turned to another high school buddy, Jason William Mizell (Jam Master Jay), to scratch a few records for them. When they liked what they heard, Simmons and McDaniels asked Mizell to join them and the trio Run-D.M.C. was born.

The Rise of Run-D.M.C., 'Walk This Way' Collab With Aerosmith

In 1983, Run-D.M.C. signed with Profile Records and collected a $2,500 advance. The group hit modest pay dirt with its first single, “It’s Like That/Sucker MCs.” The song peaked at No. 15 on the R&B charts and helped pave the way for the band's self-titled debut album in 1984. Branded by the group’s sportswear attire and hard-nosed street language, the record solidified Run-D.M.C.'s reputation as the leaders of the new hip-hop sound.

Their 1985 album, King of Rock, continued Run-D.M.C.’s momentum. But it was 1986’s platinum-selling Raising Hell that proved to be a signature record both for the band and hip-hop in general. Produced by Rick Rubin, Raising Hell featured the highly touted single, “Walk This Way,” a rap version of Aerosmith’s 1975 smash hit of the same name. The track was a whole new kind of force to hit the airwaves, blending Run-D.M.C.’s hard-edged rap style with Steven Tyler’s powerful rock vocals and Joe Perry’s driving guitar riffs. The song soared up the charts, pushing hip-hop into the mainstream and making Run-D.M.C. music superstars. Across America, the band became a household name.

During the group's short but important heyday, it racked up many firsts for a rap group, including the first to have its music video played on MTV, the first to appear on the cover of Rolling Stone magazine and the first to perform on Saturday Night Live.

Run-D.M.C. broke up temporarily in the late 1980s, but reconfigured in 1993 to release a new album, Down with the King, before taking another hiatus. In 2000 Run-D.M.C. got back together to release Crown Royal. The tour that followed included appearances with Aerosmith.

But in 2002, tragedy befell the group when Jam Master Jay was shot and killed in his studio in Queens, New York. In the years since Mizell’s death, however, Run-D.M.C.’s legacy and impact on hip-hop music has only grown. In 2009, the group was inducted into the Rock and Roll Hall of Fame, just the second rap group to earn the honor. In 2016, Run-D.M.C. received rap's first Grammy Lifetime Achievement Award.

As it did McDaniels, Mizell’s death hit Simmons hard. In the wake of his friend's murder, he stepped back from music to run his brother Russell’s Phat Farm apparel company. Around this time he also became an ordained Pentecostal minister and started going by the name Reverend Run. “I was a little unhappy with what was going on so I started going to church,” he explained to NPR in 2012. “And when I started going to church I started to feel better. Things were starting to look brighter for me. I started to see that learning the principles of God was helping to shape my life better.”

Simmons notably returned to the spotlight in 2005, on the MTV reality series Run’s House. The program, which ran until 2009, followed the life of Simmons, his wife, Justine, and their five children. Perhaps the most captivating and heart-wrenching moment of the series came in 2006, when the couple dealt with their grief over losing their daughter, Victoria, who died just two hours after her birth. Leveraging their status as celebrity parents, in 2008 Simmons and Justine released the parenting guide, Take Back Your Family: A Challenge to America’s Parents.

Simmons has also continued to make and play music, and in 2005 released the solo album Distortion. Three years later he launched a national tour with friend Kid Rock. In 2013, he co-authored a self-help guide for women seeking to understand the male mind, Manology: Secrets of Your Man's Mind Revealed, with actor and R&B star Tyrese Gibson.

Among other charities he supports, Joseph Simmons and his brothers co-founded the Rush Philanthropic Arts Foundation, which is dedicated to helping inner-city children and young artists.

Simmons and his first wife, Valerie Vaughn, have three children together, Vanessa, Angela and Joseph "Jojo" Jr. He married Justine Jones in 1994, and the couple have two sons together, Daniel and Russell, and daughter Miley Justine, whom they adopted in 2007. Their baby Victoria died shortly after being born in 2006.