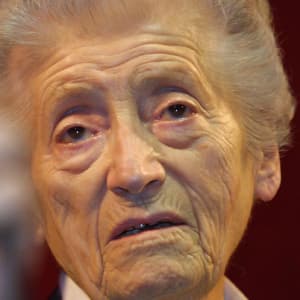 Lucie Aubrac was a French resistance leader who struggled against the Nazis during WWII.

Lucie Aubrac was hailed for her courageous actions in the underground network Libération-Sud in southern France during World War II. She was awarded the Legion of Honor for her wartime activities, notably the dramatic rescue from the Gestapo of her husband, Raymond Samuel, and other Resistance leaders in 1943.

Lucie Aubrac was born Lucie Bernard, in Mâcon, France, on June 29, 1912. Her parents, modest wine growers in central France, raised her as a Catholic. Brilliant in school, she had earned a scholarship to study in the United States. However, concerned about Nazi activities in Germany, Lucie joined the French Communist Party to fend off Fascism. It was through that group that in December 1939 she met Jewish engineering student Raymond Samuel, who had just completed a year of study at the Massachusetts Institute of Technology. They decided to stay in France and get married.

After the German invasion of France in 1940, the couple moved to unoccupied Lyon. Lucie began teaching history, and she and Raymond joined the Resistance. They met Emmanuel d’Astier, and the three formed the left-wing Libération-Sud (Liberation South) Resistance group. Lucie and Raymond led double lives as teacher and engineer by day and Resistance fighters by night. The couple used many aliases and eventually adopted Aubrac as their surname.

Over the next four years, Lucie and Raymond Aubrac’s worked for the Resistance, publishing propaganda and helping fellow partisans escape arrest. In May 1941, Lucie Aubrac gave birth to the couple’s first child, a boy, Jean-Pierre, whom she often took to Resistance meetings as a cover. That same year, Lucie and Raymond befriended Jean Moulin, a top aide to General Charles de Gaulle who was assigned to the Resistance.

By the end of 1942, the German army occupied all of France, and Lyon became the headquarters for Gestapo chief Klaus Barbie. whose ruthlessness eventually earned him the nickname "The Butcher of Lyon." As a result, the Aubracs' lives were subject to a more intense scrutiny. In March 1943, Raymond was arrested but later released after convincing German officials he was nothing more than a small-time black-marketer. But on June 21, 1943, Raymond and Jean Moulin were arrested and beaten repeatedly for information. Moulin was tortured so severely that he died from his injuries. Raymond was held in the Montluc prison in Lyon, where his interrogation continued.

Lucie Aubrac was pregnant with her second child and worried that she would never see her husband again. With the help of other Resistance fighters, she devised a plan to free Raymond. She went to the Gestapo headquarters and claimed she was unmarried and that Raymond was the father. Citing a French law that allowed condemned prisoners to wed, she successfully convinced German officers to allow her to “marry” Raymond. After the ceremony, as Raymond was being transferred back to prison, armed partisans attacked and freed him and 15 others.

Lucie and Raymond Aubrac went into hiding and eventually made their way to London in February 1944. In March, Charles de Gaulle announced that once France was liberated, women would be granted the right to vote. In anticipation of this, Lucie became a representative of a consultative congress, making her the first woman ever to sit on a French parliamentary assembly.

After the war, the Aubracs returned to France, and Lucie taught history. She often visited schools and told students of her experiences in the Resistance. She also served on several committees for the French Republic and was active in human-rights campaigns. In 1996, she was awarded the Legion of Honor by the French government.

Lucie and Raymond Aubrac’s story might have ended there had it not been for the arrest of Klaus Barbie in Bolivia in 1983. Barbie had moved to Bolivia in the 1960s and lived there until his arrest. During his 1987 trial, he accused Raymond Aubrac of being an informant and responsible for the arrest of Jean Moulin. This prompted Lucie Aubrac to write her memoirs in a book, later titled Outwitting the Gestapo.

Relying heavily on information supplied by Barbie, in 1997, journalist Gérard Chauvy published a book that suggested Raymond Aubrac had betrayed Jean Moulin. A year later the Aubracs won a libel suit against Chauvy. In 2000, Lucie Aubrac published another book The Resistance Explained to My Grandchildren.