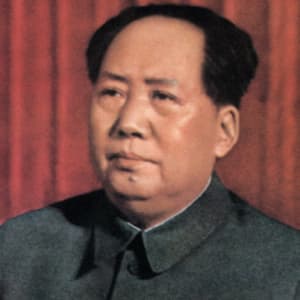 Who Was Mao Tse-tung?

Born on December 26, 1893, in Shaoshan, Hunan Province, China, Mao Tse-tung served as chairman of the People's Republic of China from 1949 to 1959, and led the Chinese Communist Party from 1935 until his death. Mao's "Great Leap Forward" and the Cultural Revolution were ill-conceived and had disastrous consequences, but many of his goals, including stressing China's self-reliance, were generally laudable.

Mao Tse-tung died from complications of Parkinson's disease on September 9, 1976, at the age of 82, in Beijing, China.

In 1966, Mao Tse-tung made his political return and launched the Cultural Revolution. Appearing at a gathering at the Yangtze River in May, the 73-year-old Mao swam for several minutes in the river, looking fit and energetic. The message to his rivals was, "Look, I'm back!" Later, he and his closest aides choreographed a series of public rallies involving thousands of young supporters. He calculated correctly that the young wouldn't remember much about the failure of the Great Leap Forward and the subsequent famine.

In a classic autocratic method to gain control, Mao Tse-tung manufactured a crisis that only he could solve. Mao told his followers that bourgeois elements in China were aiming to restore capitalism, and declared these elements must be removed from society. His youthful followers formed the Red Guards and led a mass purge of the "undesirables." Soon Mao was back in command. To prevent a repeat of the rejection he received during the Hundred Flowers Campaign, Mao ordered the closure of China's schools, and young intellectuals living in the cities were sent into the countryside to be "re-educated" through hard manual labor. The Revolution destroyed much of China's traditional cultural heritage as well as creating general economic and social chaos in the country. It was during this time that Mao's cult of personality grew to immense proportions.

In the late 19th century, China was a shell of its once glorious past, led by the decrepit Qing Dynasty. Mao Tse-tung was born on December 26, 1893, in the farming community of Shaoshan, in the province of Hunan, China, to a peasant family that had tilled their three acres of land for several generations. Life was difficult for many Chinese citizens at the time, but Mao's family was better off than most. His authoritarian father, Mao Zedong, was a prosperous grain dealer, and his mother, Wen Qimei, was a nurturing parent.

While Mao attended a small school in his village when he was eight years old, he received little education. By age 13, he was working full-time in the fields, growing increasingly restless and ambitious.

At the age of 14, Mao Tse-tung's father arranged a marriage for him, but he never accepted it. When he turned 17, he left home to enroll in a secondary school in Changsha, the capital of Hunan Province. In 1911, the Xinhua Revolution began against the monarchy, and Mao joined the Revolutionary Army and the Kuomintang, the Nationalist Party. Led by Chinese statesman Sun Yat-sen, the Kuomintang overthrew the monarchy in 1912 and founded the Republic of China. Spurred on by the promise of a new future for China and himself, Mao reveled in the political and cultural change sweeping the country.

In 1918, Mao Tse-tung graduated from the Hunan First Normal School, becoming a certified teacher. That same year, his mother died, and he had no desire to return home. He traveled to Beijing, but was unsuccessful in finding a job. He finally found a position as a librarian assistant at Beijing University and attended a few classes. At about this time, he heard of the successful Russian Revolution, which established the communist Soviet Union. In 1921, he became one of the inaugural members of the Chinese Communist Party.

In 1923, Chinese leader Sun Yat-sen began a policy of active cooperation with the Chinese Communists, who had grown in strength and number. Mao Tse-tung had supported both the Kuomintang and the Communist Party, but over the next few years, he adopted Leninist ideas and believed that appealing to the farming peasants was the key to establishing communism in Asia. He rose up through the ranks of the party as a delegate assemblyman and then executive to the Shanghai branch of the party.

Death of Sun Yat-sen and the 'Long March'

In March 1925, Chinese President Sun Yat-sen died, and his successor, Chiang Kai-shek, became the chairman of the Kuomintang. Unlike Sun Yat-sen, Chiang was more conservative and traditional. In April 1927, he broke the alliance and began a violent purge of the Communists, imprisoning or killing many. That September, Mao Tse-tung led an army of peasants against the Kuomintang, but was handily defeated. The remnants of the army fled to Jiangxi Province, where they reorganized. Mao helped establish the Soviet Republic of China in the mountainous area of Jiangxi and was elected chairman of the small republic. He developed a small but strong army of guerilla fighters, and directed the torture and execution of any dissidents who defied party law.

By 1934, there were more than 10 regions under the control of the Communists in Jiangxi Province. Chiang Kai-shek was getting nervous about their success and growing numbers. Small raids and attacks on outlying Communist strongholds had not discouraged them. Chiang reasoned it was time for a massive sweep of the region to eliminate the Communist influence. In October 1934, Chiang amassed nearly 1 million government forces and surrounded the Communist stronghold. Mao was alerted to the impending attack. After some intense arguing with other leaders, who wanted to conduct a final stand against the government forces, he convinced them that retreat was the better tactic.

For the next 12 months, more than 100,000 Communists and their dependents trekked west and north in what became known as the "Long March" across the Chinese mountains and swampland to Yanan, in northern China. It was estimated that only 30,000 of the original 100,000 survived the 8,000-mile journey. As word spread that the Communists had escaped extermination by the Kuomintang, many young people migrated to Yanan. Here Mao employed his oratory talents and inspired volunteers to faithfully join his cause as he emerged the top Communist leader.

In July 1937, the Japanese Imperial Army invaded China, forcing Chiang Kai-shek to flee the capital in Nanking. Chiang's forces soon lost control of the coastal regions and most of the major cities. Unable to fight a war on two fronts, Chiang reached out to the Communists for a truce and support. During this time, Mao established himself as a military leader and, with aid from Allied forces, helped fight the Japanese.

With the Japanese defeat in 1945, Mao Tse-tung was able to set his sights on controlling all of China. Efforts were made — by the United States in particular — to establish a coalition government, but China slid into a bloody civil war. On October 1, 1949, in Tiananmen Square, Beijing, Mao announced the establishment of the People's Republic of China. Chiang Kai-shek and his followers fled to the island of Taiwan, where they formed the Republic of China.

Over the next few years, Mao Tse-tung instituted sweeping land reform, sometimes through persuasion and other times through coercion, using violence and terror when he deemed it necessary. He seized warlord land, converting it into people's communes. He instituted positive changes in China, including promoting the status of women, doubling the school population and improving literacy, and increasing access to health care, which dramatically raised life expectancy. But Mao's reforms and support were less successful in the cities, and he sensed the discontent. In 1956, he launched the "Hundred Flowers Campaign" and, in democratic fashion, allowed others to express their concerns. Mao hoped for a wide range of useful ideas, expecting only mild criticism of his policies. Instead, he received a harsh rebuke and was shaken by the intense rejection by the urban intelligentsia. Fearing a loss of control, he ruthlessly crushed any further dissent. Hundreds of thousands of Chinese were labeled "rightists," and thousands were imprisoned.

Fallout from the 'Great Leap Forward'

In January 1958, Mao Tse-tung launched the "Great Leap Forward," attempting to increase agricultural and industrial production. The program established large agricultural communes with as many as 75,000 people working the fields. Each family received a share of the profits and a small plot of land. Mao had set idealistic, some would say improbable, expectations for both agriculture and industrial production, believing the country could make a century's worth of advancement in a few decades.

At first, reports were promising, with accounts of overwhelming advancement. However, three years of floods and bad harvests told a different story. Agricultural production had not come close to expectations, and reports of massive steel production proved to be false. Within a year, an appalling famine set in and entire villages died of starvation. In the worst manmade famine in human history, an estimated 40 million people died of hunger between 1959 and 1961. It became clear that Mao knew how to organize a revolution, but was totally inept at running a country. The scale of the disaster was hidden from the nation and the world. Only high-level Communist Party leaders knew, and Mao's protective inner circle kept many of the famine's details from him.

As a result of the Great Leap Forward's failure, in 1962 Mao Tse-tung was quietly pushed to the sidelines and his rivals took control of the country. For the first time in 25 years, Mao was not a central figure in leadership. While he waited for his time to return, an ardent supporter, Lin Biao, compiled some of Mao's writings into a handbook entitled Quotations from Chairman Mao. Known as the "Little Red Book," copies were made available to all Chinese.

In 1972, to further solidify his place in Chinese history, Mao Tse-tung met with United States President Richard Nixon, a gesture that eased tensions between the two countries and elevated China's prominence as a world player. During the meetings, it became apparent that Mao's health was deteriorating, and not much was accomplished because Mao was not always clear in his statements or intentions.

Mao Tse-tung died from complications of Parkinson's disease on September 9, 1976, at the age of 82, in Beijing, China. He left a controversial legacy in both China and the West as a genocidal monster and political genius. Officially, in China, he is held in high regard as a great political strategist and military mastermind, the savior of the nation. However, Mao's efforts to close China to trade and market commerce and eradicate traditional Chinese culture have largely been rejected by his successors. While his emphasis on China's self-reliance and the rapid industrialization that he promoted is credited with laying the foundation for China's late 20th century development, his harsh methods and insensitivity to anyone who didn't give him full faith and allegiance have been widely rebuked as self-defeating.