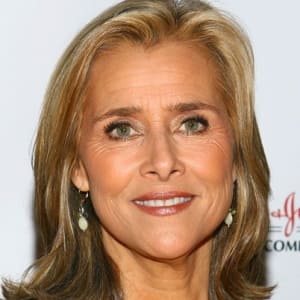 Meredith Vieira is an Emmy-winning TV journalist and personality who has co-anchored The Today Show and co-hosted The View.

Meredith Vieira was born on December 30, 1953 in Providence, Rhode Island, eventually entering broadcast journalism. She's worked on the CBS news programs West 57th and 60 Minutes, has been a co-host of ABC's The View and co-anchor of NBC's The Today Show. A game show host as well, Vieira has won multiple Emmy Awards. She launched her own talk show in 2014.

Meredith Vieira was born on December 30, 1953 in Providence, Rhode Island. Upon graduating from Tufts University in 1975 with a degree in English, Vieira immediately began pursuing her dreams of a career in broadcast journalism. She started as a news announcer for a Worcester, Massachusetts radio station, but soon started working as an on-air reporter for WCBS-TV in New York City.

Among her early assignments were the 1980 Republican National Convention in Detroit and an award-winning series on child molestation. In January 1982, Vieira became a reporter for CBS News in its Chicago bureau; she was named a correspondent two years later. In Chicago, she met Richard Cohen, a TV news producer; the couple married in 1986, a year after Vieira moved back to New York and began working as a principal correspondent on the CBS newsmagazine West 57th. In 1989, Vieira won four Emmy Awards for stories she reported on West 57th during its 1987-88 season.

From 1989 to 1991, Vieira was a co-editor of CBS's acclaimed newsmagazine 60 Minutes. She worked on the award-winning segment "Ward 5A," about the first AIDS ward in San Francisco, and won a fifth Emmy Award for "Thy Brother's Keeper," a report about Christians who saved Jews during the Holocaust. Vieira also frequently anchored CBS Morning News and worked as contributing national correspondent on CBS Evening News With Dan Rather. In June 1991, she became contributing correspondent for the CBS News primetime series Verdict as well, reporting on actual courtroom trials.

After the birth of her first son, Ben, in 1989, Vieira had scaled back her work on West 57th, and her limited schedule had continued when she started working for 60 Minutes. But in 1991, when she became pregnant with her second child, 60 Minutes producer Don Hewitt announced that the show needed a full-time correspondent. Their dispute became public, and Vieira subsequently left the program.

Vieira had her second son, Gabe, in 1991 and her daughter Lily in 1993. In October 1993, she joined ABC News as chief correspondent for Turning Point, which premiered in March 1994. In 1995, she won her sixth Emmy Award for the report "Inside the Hate Conspiracy: America's Terrorists," about a white supremacist group.

In addition, Vieira's feature on the city of Baltimore's efforts to mainstream disabled students in public schools won a 1995 Robert F. Kennedy journalism award, and her interviews with the "Framingham Eight"—eight women fighting for a second chance after killing the partners they say abused them—won an award from the Foundation of American Women in Radio and Television.

After 1997, Vieira decided she wanted to spend more time with her family. She found greater work flexibility, as well as a fresh new twist on television journalism, as a co-host of ABC's The View, a daily morning talk show launched in 1997 by newswoman Barbara Walters. With cohosts Walters, Star Jones, Joy Behar and Lisa Ling (who replaced original cohost Debbie Matenopoulos early in the show's run), Vieira offered the show's fans a diverse, multigenerational look at topics ranging from entertainment and celebrity interviews to politics and legal issues.

In 2002, Vieira added another job to her list of accomplishments—that of game show host when she took over the reins of popular syndicated quiz program Who Wants to Be a Millionaire.

Then in the spring of 2006, Vieira was asked to anchor NBC's The Today Show after longtime host Katie Couric left to pursue a career at CBS News. Opposite Matt Lauer, Vieira started her anchoring duties the following September.

Having fun with film work as well, Vieira has been featured in the animated romp Shrek Ever After and the comedies Gulliver’s Travels and Get Me to the Greek, all from 2010.

Realizing she wanted to have a change in quality of life for herself and her family (including her husband, who had been diagnosed years ago with multiple sclerosis), Vieira left The Today Show in 2011. She was succeeded by Ann Curry and continued with her Millionaire hosting duties until May of 2013. That same year, it was announced that Vieira had started filming a pilot for her own daytime talk show. According to the Hollywood Reporter, she made three different pilots before finding the right format. Vieira also explained that her show would "introduce our audience to people they don't know who are doing things that, in their own way, change the world."

The Meredith Vieira Show made its debut in September 2014. Despite having a strong start, ratings sharply declined and consequently, the show was canceled after two seasons.