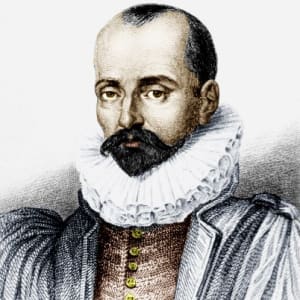 Michel de Montaigne was a 16th century French author who developed the essay as a literary genre. His first two books of essays were published in 1580.

Born into a French family of minor nobility on February 28, 1533, Michel de Montaigne held a seat in the Bordeaux parliament. Montaigne retired from public life and began to write a series of philosophical and personal essays in 1571. This writing was the first of its kind, making Montaigne responsible for the establishment of the essay as a literary genre. He died in France on September 13, 1592.

Montaigne attended the College of Guyenne in Bordeaux. He is then presumed to have studied law in Toulouse before beginning his career at the court of Périgueux. In 1557, Montaigne moved to a seat in the Bordeaux parliament.

Career as a Writer

Montaigne's father died in 1568, shortly after he had asked Montaigne to produce a French translation of Teholgia naturalis (Natural Theology), written by Spanish theologian Raymond Sebond. Montaigne's translation was published in 1569.

His father's death also meant that Montaigne inherited the familial estate. In 1571, Montaigne retreated to his castle and isolated himself from public life. He also began to write personal and subjective reflections on topics such as religion, education, friendship, love and freedom. Montaigne called his original work essais, which means "attempts" in French. He developed a new literary genre: the essay.

One essay was "The Apology for Raymond Sebond," which reflected Montaigne's Christian skepticism. Another was "On Friendship," inspired by Montaigne's relationship with the late Étienne de la Boétie, whom he had befriended at the Bordeaux parliament. Montaigne's first two volumes of Essais (Essays) were published in 1580.

While in Italy in 1581—where he had been seeking treatment for his kidney stones—Montaigne was informed he had been elected mayor of Bordeaux. He served as mayor from 1581 to 1585, moderating conflicts between Protestants and Catholics. During this time, a second edition of Essays arrived in 1582.

A third volume of Montaigne's essays was included in the fifth edition of his work, which came out in 1588. Many of the pieces in the first two volumes had also been edited and refined. Montaigne further revised his work during his last years, which he spent at his estate. At the age of 59, Montaigne died in Château de Montaigne on September 13, 1592.

Both before and after his death, Montaigne's essays were widely read. His beliefs—such as his skepticism and cultural relativism—sparked both discussion and criticism. Many writers and philosophers were influenced by Montaigne, including Voltaire, Jean Jacques Rousseau and Gustave Flaubert.