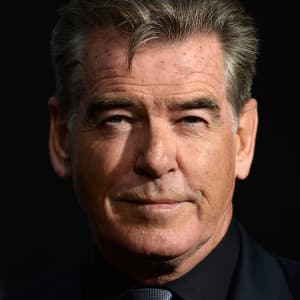 Who Is Pierce Brosnan?

Irish actor Pierce Brosnan, born on May 16, 1953, first won over American television audiences in the detective series Remington Steele, which debuted in 1982. Today, he's best known for his role as the famous British spy James Bond in the film series of the same name, following in the footsteps of actors like Sean Connery and Roger Moore. Outside of Bond, Brosnan is known for big-screen performances in The Thomas Crown Affair, Laws of Attraction, Mrs. Doubtfire and Mamma Mia!

Brosnan has been married twice. His first marriage to actress Cassandra Harris lasted from 1980 until her death in 1991. He adopted her two children, Charlotte and Christopher, and the couple had a son together, Sean. In 2001, Brosnan married Keely Shaye. They have two children together, Paris and Dylan.

Pierce Brendan Brosnan was born on May 16, 1953, in Drogheda, County Louth, Ireland. After an unsettled childhood, Brosnan moved to London, where he joined an experimental theater group and studied at the Drama Centre. After several stage roles in London, he moved to Los Angeles, where he was offered the lead in the detective series Remington Steele, which debuted in 1982.

Brosnan won over American television audiences with his Remington Steele performance, which brought deserved attention to his good looks and charm. Viewers tuned in to catch the show's latest mystery and watch the sparks fly between the two lead characters, played by Brosnan and his co-star, Stephanie Zimbalist.

When he received an offer in 1986 to play the famous British spy James Bond — of the film series of the same name — Pierce Brosnan tried to get out of his contract for Remington Steele, but to no avail. The TV series ended the following year.

In the late '80s, Brosnan acted in several television and film projects, including the TV miniseries Around the World in 80 Days (1989), and the hit comedy film Mrs. Doubtfire (1993). In 1995, Brosnan finally secured a role as the legendary James Bond in Goldeneye, following in the footsteps of actors like Sean Connery and Roger Moore. He played Bond three more times, in 1997's Tomorrow Never Dies, 1999's The World is Not Enough and 2002's Die Another Day.

After starring in four James Bond films, Brosnan decided it was time to pass the baton: Actor Daniel Craig took over the part in 2006 — four years after the release of Die Another Day — in a remake of the first Bond picture, Casino Royale.

Outside of playing the smooth but deadly superspy, Brosnan has tackled several dramatic and comedic roles. He has appeared in such films as 1999's The Thomas Crown Affair, with Rene Russo; 2004's Laws of Attraction, starring alongside Julianne Moore; and 2005's The Matador, with Greg Kinnear, among other big-screen productions. Since the comedy smash Mrs. Doubtfire was released in 1993, media reports have speculated on a potential sequel — in which Brosnan would most likely appear.

In 2008 Brosnan starred as architect Sam Carmichael, one of the possible fathers to the character Sophie, in the film adaptation of Mamma Mia! He reprised his role in 2018 in Mamma Mia! Here We Go Again.