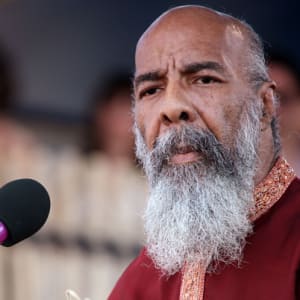 Richie Havens was an American folk singer who opened the 1969 Woodstock Festival, and covered numerous pop and folk songs over his long career.

Born on January 21, 1941, in Brooklyn, New York, American folk singer Richie Havens is indelibly linked to the Woodstock generation. After starting out performing in neighborhood doo-wop and gospel groups, Havens moved to Greenwich Village, where he picked up the guitar and started performing in coffee houses. After releasing several studio albums, Havens opened the 1969 Woodstock Festival. He died on April 22, 2013, at the age of 72.

Richie Havens was born on January 21, 1941, in Brooklyn, New York. The eldest of nine children, Havens, whose father was Native American and mother hailed from the Caribbean, grew up in a family where music held importance.

Havens's father had a gifted ear, often playing a song on the piano after hearing it just once. His mother loved to sing, and often serenaded the family while she did the dishes. Inheriting his father's ear for music, Havens was barely in his teens when he started organizing his neighborhood buddies into street-corner doo-wop groups. By the time he was 16, he and several friends had put together a gospel group known as the McCrea Gospel Singers.

Havens was as passionate about poetry as he was about music. As the Beatnik culture began to claim Greenwich Village as its home, Havens desperately wanted to be right in the thick of things. In 1961, Havens, who'd spent almost of all his life inside Brooklyn's borders, was getting to know the Village scene. He began scratching out a living by painting portraits, hanging around coffee shops and listening to as much music as he could. "The songs really changed my life," he later said.

Two years after he arrived in the Village, Havens picked up a guitar for the first time. From there, it was a short leap to commercial success. After spending a few years playing the same coffee houses he'd often frequented and gaining a reputation as a talented solo performer, he recorded a pair of demo albums in 1965 and '66. Havens then signed on with renowned manager Albert Grossman and landed a record deal with Verve, a division of MGM Records.

In 1967, Havens released Mixed Bag, which featured a popular version of Bob Dylan's "Just Like a Woman," among other covers. His style of play—open chords, strumming hard on the guitar so that it became essentially a percussion instrument—anchored his appeal. Havens's follow-up album, 1968's Something Else Again, was his first album to climb into the Billboard charts, and helped pushed him to the masses. A year later, his double-album, Richard P. Havens, continued the momentum.

In 1969, Havens opened the Woodstock Festival. His striking performance ran more than three hours and featured a mesmerizing rendition of an old spiritual called "Motherless Child," later known as "Freedom." The 1970 movie about the festival furthered Haven's star status and cemented his legacy with the Woodstock generation.

Havens's 1971 album, Alarm Clock, cracked the Top 30 and featured a stunning cover of the Beatles' "Here Comes the Sun."

While Havens never again achieved the kind of popularity he experienced in the immediate aftermath of Woodstock, his career has proved to be enduring. Over his long career, Havens was a steady touring musician, producing a number of studio and live albums. In 2008, he released his 21st studio album, Nobody Left to Crown.

"I really sing songs that move me. I'm not in show business," Havens once said of his career. "I'm in the communications business. That's what it's about for me."

Richie Havens died of a heart attack on April 22, 2013, at the age of 72. According to media reports, a public memorial for Havens will be announced at a later date. More information can be found at Havens's official website.