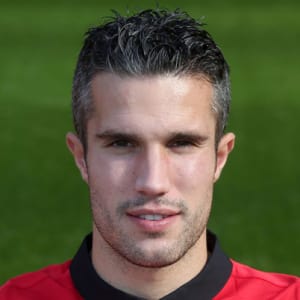 Born on August 6, 1983, in Rotterdam, Netherlands, Robin van Persie began his professional soccer career with the local Feyenoord club. He blossomed with England's Arsenal F.C., and recovered from an ankle injury to lead the Dutch team to the final of the 2010 FIFA World Cup. Van Persie ended a lengthy title drought with Manchester United and became the leading Dutch international scorer in 2013.

Soccer player Robin van Persie was born on August 6, 1983, in Rotterdam, Netherlands. The third child of two artists, van Persie learned to play soccer in his ethnically diverse neighborhood of Kralingen. He joined the youth system of S.B.V. Excelsior shortly after his parents split when he was 5, eventually moving to rival Rotterdam club Feyenoord as a highly regarded teenage player.

Van Persie made his professional debut for Feyenoord as a 17-year-old and enjoyed immediate success, starting in the 2002 UEFA Cup final victory over Borussia Dortmund. But the left-winger also developed an unfavorable reputation because of his clashes with manager Bert van Marwijk and his teammates. He was shopped to other clubs until England's Arsenal F.C. signed him in 2004.

Converted to a center-forward by Arsenal manager Arsene Wagner, van Persie blossomed into a player known for his dribbling and shooting abilities. He also became a fixture on the Dutch national team, appearing in the 2006 FIFA World Cup and earning Bronze Boot honors as the third-leading scorer at the 2008 European Championship. He was playing for the Dutch side in November 2009 when he tore ligaments in his right ankle, an injury that sidelined him for five months.

After returning to the pitch late in the 2009-10 season, van Persie proved more than capable of handling top-flight competition by helping the Netherlands reach the final of the 2010 FIFA World Cup. He led the Premier League in scoring in 2011-12 and earned the PFA Players' Player of the Year Award, an honor that underscored his maturity and improved reputation. Still, his lack of titles since winning the FA Cup early in his tenure with Arsenal left him open to criticism.

The longtime Gunner signed with Manchester United in August 2012, a move that paid off with van Persie claiming his second straight scoring crown and finally ending his trophy drought with a Premier League title. He established a Dutch record with his 41st career international goal in October 2013, with several years left to add to that mark and his growing collection of accomplishments.