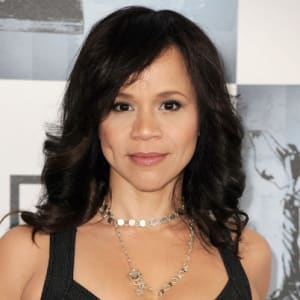 Actress Rosie Perez choreographed the TV show In Living Color and earned an Oscar nomination for her role in Fearless.

Born on September 6, 1964, in New York City, Rosie Perez was discovered in a nightclub by Spike Lee—a moment that radically changed her career path. She starred in his film Do the Right Thing, which led to more roles. She starred with Woody Harrelson in White Men Can't Jump in 1992. Around this time, Perez also picked up several Emmy Award nominations for her choreography on the show In Living Color. She received an Academy Award nomination for her work in the 1993 drama Fearless. More recently, Perez appeared in such films as The Take and Pineapple Express.

Born Rosa Maria Perez on September 6, 1964, in Brooklyn, New York, Rosie Perez has enjoyed success as both an actress and a choreographer. Both of her parents were Puerto Rican. Her mother Lydia had been a singer and her father Ismael Serrano was a merchant marine. According to some reports, her mother was married to another man when Perez was born.

Perez may be known for her quick-talking characters, but she struggled with her speech early on. "I had such a bad speech impediment as a result of the emotional trauma I was going through in my life," she told T magazine. Perez spent time in foster care and had a troubled relationship with her mother. She found some escape from her woes in dance, enrolling in a special program for inner city kids.

Still school was a tough place for Perez. As she explained to Hispanic magazine, "In Brooklyn, I was the nerd. I was the one who used to have to run home from school getting beat up. And the only reason I know how to fight is that I got tired of getting beat up." Perez eventually moved in with an aunt who proved the love and support she needed.

After high school, Perez went out to Los Angeles for college. She wanted to study to become a marine biologist. Purely by accident, she got into acting. Director Spike Lee saw her in a nightclub and hired her for the 1989 film Do the Right Thing. This movie explores what could happen when racial tensions explode on a hot summer day.

Do the Right Thing opened the door for more acting roles. On the small screen, she made a guest appearance on 21 Jump Street with Johnny Depp. Perez also starred in the basketball comedy White Men Can't Jump (1992) with Woody Harrelson and Wesley Snipes. The following year, she appeared in the romantic drama Untamed Heart (1993) with Marisa Tomei and Christian Slater.

Perez also got to show off her dance background as the choreographer for the comedy show In Living Color. She earned three Emmy Award nominations for her work on the series. It was her dramatic turn in Fearless (1993) that earned her first Oscar nomination. Starring with Jeff Bridges, Perez played a plane crash survivor wracked with guilt of the death of her child, also in the crash. She also lent her distinctive voice to a number of different projects, including The Road to El Dorado (2000).

In 2003, Perez made her Broadway debut in a revival of Terrence McNally's Frankie and Johnny in the Clair de Lune with Joe Pantoliano. She later took the stage in such comedies Reckless in 2004 and The Ritz in 2007. On the big screen, Perez co-starred with Bobby Cannavale and John Leguizamo in the 2007 crime drama The Take. She also appeared in the 2008 stoner comedy Pineapple Express with Seth Rogen.

More recently, Perez has worked on a number of television projects. She lent her voice to the children's show Go, Diego! Go! and the adult-oriented animated series The Cleveland Show. She also had a recurring role in the short-lived drama Lipstick Jungle. In 2009, Perez was hurt while filming a guest appearance on the crime drama Law & Order: SVU. She filed a suit against the show for her injuries.

In February 2014, Perez published an autobiography entitled, Handbook for an Unpredictable Life: How I Survived Sister Renata and My Crazy Mother, and Still Came Out Smiling (with Great Hair). That September, she joined the panel of the daytime talk show, The View, alongside Whoopi Goldberg, Rosie O’Donnell and Nicolle Wallace. Her stint on the show lasted just shy of a year when, in July 2015, she announced she was leaving. The co-hosts discuss political and social topics across a wide range of current issues. The show has been airing since 1997 and is the brainchild of Barbara Walters. Perez was the first Latina to part of the The View co-hosting team.

In 2015, Perez returned to the Broadway stage starring in Larry David's A Fish In The Dark.

In addition to acting, Perez has devoted some of her time to special projects and causes. With Liz Garbus, she directed the 2006 documentary Yo Soy Boricua, Pa' Que Tu Lo Sepas!, which explores Puerto Rican culture. She has been an AIDS activist for many years and serves on the artistic board of Working Playground, a cultural organization that provides arts education to underprivileged children in New York City.

Perez was married to director and writer Seth Zvi Rosenfeld from 1999 to 2001. Rosenfeld directed her in the 1997 film A Brother's Kiss.