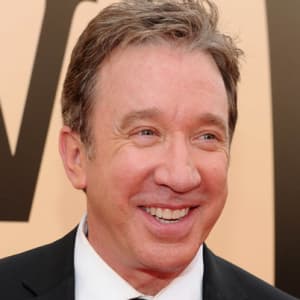 Tim Allen was a sporting goods salesman, drug dealer, and stand-up comedian before Home Improvement made him a sitcom star (and the voice of Buzz Lightyear).

Tim Allen Dick was born on June 13, 1953. Early on, he found a sense of humor vital to dealing with his unfortunate last name. It also came in handy later on when he served time for drug dealing. After prison, Allen developed an act that eventually became

Actor, comedian. Born Tim Allen Dick on June 13, 1953, in Denver, Colorado. Allen is the son of Gerald and Martha Dick, and one of six children. Allen discovered his penchant for comedy early on — as his last name became fodder for childhood jeers, he often used his wit to deflect insults. In his formative years, Allen had an especially strong connection with his father, who instilled a love of all things automotive in his son. "I loved my father more than anything," Allen remembers. "He was a tall, strong, funny, really engaging guy. I so enjoyed his company, his smell, sensibility, discipline, sense of humor — all the fun stuff we did together. I couldn't wait for him to come home."

In 1964, on his way home from a football game, Gerald was killed by drunk driver. Allen was 11 years old. In the wake of the tragedy, Allen's mother moved the family to Detroit, Michigan. Several years later, she married her high school sweetheart, a successful businessman with strong Episcopalian values. The pair raised Allen and his siblings.

Teenaged Allen was an indifferent student with a passion for shop class. After receiving his high school diploma, he attended Central Michigan University. He later transferred to Western Michigan University to earn a bachelor's degree in television and radio production. It was there that he met long-term girlfriend, Laura Deibel, and began making money on the side as a narcotics dealer.

Following his college graduation in 1976, Allen took a position at a sporting goods store, where he was quickly offered a job at the company's in-house advertising agency. Despite his accomplishments in the ad business, and his happy marriage to Deibel in 1978, Allen continued to deal drugs. His criminal activity caught up with him in October 2, 1978, when Allen and an accomplice were arrested at the Kalamazoo, Michigan, airport for possession of nearly a pound-and-a-half of cocaine. He was released on bail, and a trial was scheduled for November of that year.

In the time before his sentencing, Allen tried his hand at stand-up comedy. He made his successful debut at Detroit's Comedy Castle and a month later, on November 26, 1979, Allen made his court appearance. The comic received a reduced sentence after agreeing to testify against his partner, and was given eight years in federal prison. He ultimately served only 28 months at Sandstone Federal Correctional Institution. The time in prison seemed to whet his sense of humor, and Allen became known for his ability to wrench laughs from the toughest guards and prisoners alike.

After his parole in 1981, Allen returned to Detroit. Working at an ad agency by day, he became a regular at the Comedy Castle in the evenings. It was there that he started honing his hyper-masculine persona. He also discovered his trademark call: three ape-like, staccato grunts. As his stand-up career gained momentum, he successfully ventured into the world of commercial acting, including appearances in several ads for Mr. Goodwrench. In the midst of this burgeoning acting career, Allen became a father; his daughter, Katherine, was born in 1989.

By 1990, Allen's "Men Are Pigs" routine, which focused on the male love for hardware, was made into a Showtime television special. The segment caught the attention of Disney Studios chairman Jeffrey Katzenberg and Walt Disney CEO Michael Eisner, who offered Allen leading roles in upcoming small-screen adaptations of Turner & Hooch (1989) and The Dead Poets Society (1989). Allen turned down the roles and tenaciously fought for his own material. He eventually persuaded the studio to use his routine as the basis for a new sitcom called Home Improvement.

Shortly before the show's 1991 debut, Allen made headlines when he revealed that he had served time in prison. His controversial admittance did not manage to affect the popularity of Home Improvement, which made the Nielsen top-ten list during its first season. By 1992, Allen had earned his first Peoples' Choice Award for Favorite Male Television Performer — a distinction he held for eight consecutive years. By the time the 1993 season made it to the air, Allen had an Emmy nomination under his belt and Home Improvement was a steadfast ratings darling.

The year 1994 was an important one for Allen. In the same week, Allen had the number one book (Don't Stand Too Close to a Naked Man), the number one television show (Home Improvement), and a number one box office hit (The Santa Clause), thus proving he could make a successful jump from the small screen to film. Over the next few years, his accomplishments seemed to snowball. Allen was highly praised for his voice performance as Buzz Lightyear in Pixar's smash success Toy Story (1995), and the same year he was honored with a Golden Globe Award for his work on Home Improvement. In 1996, he earned even more commercial success with the book, I'm Not Really Here.

Allen faced another bump in the road in 1997, when was brought up on drunk driving charges. The arrest led to a stint in rehab the following year, and Allen's subsequent commitment to sobriety. But he continued to face success in 1998, when Home Improvement had another successful run, and Allen was earning an estimated $1.25 million per episode. By 1999, however, the show had run its course and the cast bid a tearful farewell. Although saddened by the loss of his regular sitcom gig, Allen was working non-stop. That year he reprised the role of Buzz Lightyear in Toy Story 2, and earned the distinctive title of "Disney Legend." Additionally, his role in 1999's big-screen sci-fi comedy, Galaxy Quest, became a cult hit. But while his career soared, his personal life suffered. Laura filed for divorce later that year.

Since then, Allen has been a frequent presence on the big screen, and has even reclaimed some romantic harmony. In 2006, shortly before the debut of his third addition to The Santa Clause franchise, he wed long-term girlfriend Jane Hajduk. The following year, Allen starred alongside John Travolta, Ray Liotta, Martin Lawrence and William H. Macy in Wild Hogs (2007). His recent film projects include the David Mamet-helmed Redbelt (2008), The Six Wives of Henry Lefay (2008), and a third addition to the Toy Story series. Additionally, the 2008 comedy Crazy on the Outside marks Allen's feature film directing debut. In the meantime, Allen continues to run his production house, Boxing Cat Films, and helm his design studio, Tim Allen Designs.