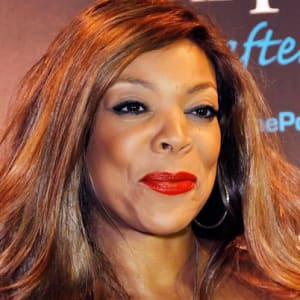 Wendy Williams is a radio DJ and TV talk show host known for her no-nonsense attitude and brash on-air personality.

Who Is Wendy Williams?

Born in New Jersey in 1964, Wendy Williams found success as a radio DJ and personality by delving deep into her own personal life, touching difficult subjects. Her tone struck a chord with listeners, leading to the launch of The Wendy Williams Show in 2008. Williams was inducted into the National Radio Hall of Fame that year, though she soon retired from the medium to concentrate on TV.

Author, television and radio talk show host Wendy Williams was born on July 18, 1964, in Asbury Park, New Jersey. Williams' oversized, brash personality made her a force on the New York City FM airwaves. She is now the host of the syndicated television program The Wendy Williams Show.

From an early age, Williams stood out. One of three children born to Thomas and Shirley Williams, she moved with her family at the age of five from Asbury Park to the middle class community of Ocean Township, New Jersey, where she spent the rest of her childhood.

At the outset, Williams says, she "spoke too loud, too fast and too much," a characteristic that was in sharp contrast to her older, more bookish sister Wanda, a straight-A student who attended Tufts University at the age of 16.

Williams, on the other hand, was not an academic wonder. She was a big girl who, by the sixth grade, already stood 5'7" and wore a size 11 shoe. With her parents pushing her, however, Williams became involved in many extra-curricular activities. She was a Girl Scout, played clarinet in the marching band and competed on her high school swimming team. When it came time to select a college, she followed in Wanda's footsteps and relocated to Boston to attend Northeastern University, graduating in 1986 with a degree in communications and a minor in journalism.

At Northeastern, Williams got involved in radio. She hosted her own urban music show on the college's radio station, WRBB, and interned for the pioneering Boston DJ, Matt Seigel of Kiss 108. In her downtime, Williams took the train to New York City to hang out at Penn Station, where she would sit by herself and listen to some of her favorite radio personalities on a portable radio.

After college, Williams bounced around as she tried to make it in radio. Her first on-air job took her to a station in St. Croix, in the Virgin Islands. Then it was on to New York, where she eventually got fired for not exactly sticking to the station's script. "It's been mostly, 'Read these liners, and play the hits' and 'You're saying too much' and 'Shut the hell up,'" Williams has said of her radio career.

After New York, Williams moved to Philadelphia, where she worked for three years before returning to Manhattan for a job at WBLS. There, Williams demonstrated that she didn't need to spin lot of records to draw big ratings. Instead, The Wendy Williams Experience delved deep into her own personal life, touching difficult subjects like her past struggles with drug addiction, her plastic surgeries and the hardships of trying to conceive.

'The Queen of All Media'

Modeling her style after shock-jock Howard Stern—even dubbing herself "The Queen of All Media" in homage to Stern's title "King of All Media"—Williams proved unafraid to weigh in on the lives of her listeners, who numbered around 12 million. For those who called in, Wendy offered up advice and tough love.

But it wasn't just with her fans that Williams exercised honesty, as many of her guests—some of them celebrity heavyweights—discovered that they wouldn't be coddled by the host. In 2003, Williams and Whitney Houston went at it on-air as the show's host asked the singer about her drug history. Williams later patched things up with Houston, but made no apologies for her interview style. "My bark is worse than my bite … by being tall and outgoing, people mistake that for being overpowering, overbearing, loud and being a bully," Williams later told The New York Times.

Williams leveraged her success on the radio into other opportunities, authoring a pair of New York Times best-sellers (Wendy's Got the Heat and The Wendy Williams Experience); writing a few novels; and landing on television. She hosted her own show on VH1 and, in the fall of 2007, made appearances on NBC's Today Show to dish on the latest celebrity gossip.

In the summer of 2008, her television exposure enhanced significantly with a trial run of BET's The Wendy Williams Show. The program's ratings motivated network executives to greenlight a full-scale run of the show the following summer. In November 2008, while waiting for the premiere of her new program, Williams was inducted into the National Radio Hall of Fame.

On July 13, 2009, Williams debuted her new television program. The show drew from her radio show's format, mixing in celebrity dirt, celebrity interviews and advice to audience members. Several weeks later, on July 31, 2009, she announced her retirement from radio. On November 19, 2009, Williams' producer announced that the show was confirmed for the 2011-12 season.

A staple of daytime talk show television, The Wendy Williams Show has garnered multiple Emmy nominations. Its host has remained true to her core of being honest with guests and fans, particularly when it comes to sharing her own health issues. In 2017, she revealed that she was dealing with Graves' disease, an autoimmune condition that leads to fatigue, anxiety and hair loss—one reason she wears wigs. In late February 2018, Williams announced that she was taking a few weeks off from the show to focus on her health.

Williams lives in northern New Jersey with her husband and their son, Kevin Jr., who was born 1999.