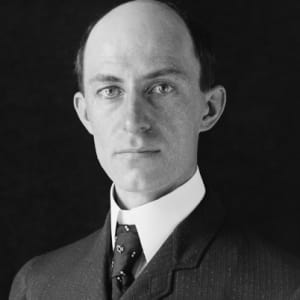 Wilbur Wright is best known for developing the first successful airplane with his brother, Orville.

Born in Indiana in 1867, Wilbur Wright was the elder brother of Orville Wright, with whom he developed the world's first successful airplane. On December 17, 1903, the Wright brothers succeeded in making the first free, controlled flight of a power-driven airplane. An extraordinary achievement, Wilbur flew the plane for 59 seconds over a distance of 852 feet. Today, the Wright brothers are regarded as the "fathers of modern aviation." Wilbur Wright died in Dayton, Ohio, on May 30, 1912.

Wilbur Wright was born on April 16, 1867, near Millville, Indiana, the middle child in a family of five children. His father, Milton Wright, was a bishop in the Church of the United Brethren in Christ. His mother was Susan Catherine Koerner Wright. As a child, Wilbur's playmate was his younger brother, Orville, born in 1871.

Milton Wright's preaching took him on the road frequently, and he often brought back small toys for his children. In 1878 he brought back a small model helicopter for his boys. Made of cork, bamboo and paper, and powered by a rubber band to twirl its blades, the model was based on a design by the French aeronautical pioneer Alphonse Pénaud. Fascinated by the toy and its mechanics, Wilbur and Orville would develop a lifelong love of aeronautics and flying.

Wilbur was a bright and studious child, and excelled in school. His personality was outgoing and robust, and he made plans to attend Yale University after high school. In the winter of 1885-86, an accident changed the course of Wilbur's life. He was badly injured in an ice hockey game, when another player's stick hit him in the face.

Though most of his injuries healed, the incident plunged Wilbur into a depression. He did not receive his high school diploma, canceled plans for college and retreated to his family’s home. Wilbur spent much of this period at home, reading books in his family’s library, and caring for his ailing mother. Susan Koerner Wright died in 1889 of tuberculosis.

In 1889 the brothers started their own newspaper, the West Side News. Wilbur edited the paper and Orville was the publisher. The brothers also shared a passion for bicycles—a new craze that was sweeping the country. In 1892, Wilbur and Orville opened a bike shop, fixing bicycles and later selling their own designs.

Always working on different mechanical projects and keeping up with scientific research, the Wright brothers closely followed the research of German aviator Otto Lilienthal. When Lilienthal died in a glider crash, the brothers decided to start their own experiments with flight. Determined to develop their own successful design, Wilbur and Orville headed to Kitty Hawk, North Carolina, known for its strong winds.

Wilbur and Orville set to work trying to figure out how to design wings for flight. They observed that birds angled their wings for balance and control, and tried to emulate this, developing a concept called "wing warping." The Wright brothers found the magic formula when they added a moveable rudder, and on December 17, 1903, they succeeded in flying the first free, controlled flight of a power-driven airplane. An extraordinary achievement, Wilbur flew the plane for 59 seconds over a distance of 852 feet.

The Wright brothers soon found that their success was not appreciated by all. Many in the press, as well as fellow flight experts, were reluctant to believe the brothers' claims. As a result, Wilbur set out for Europe in 1908, where he hoped he would have more success convincing the public and selling airplanes.

In France, Wilbur found a much more receptive audience. There, he made many public flights and gave rides to officials, journalists and statesmen. In 1909, Orville joined his brother in Europe, as did their younger sister, Katharine. The Wrights became huge celebrities there, hosted by royals and heads of state, and constantly featured in the press. The Wrights began to sell their airplanes in Europe, and then returned to the United States in 1909.

The brothers went on to become wealthy businessmen, filling contracts for airplanes in both Europe and the United States. Today, the Wright brothers are considered the "fathers of modern aviation."

Wilbur and Orville always took shared credit for their innovations, and maintained a close relationship throughout their lives. Behind the scenes, however, there was a division of labor. With his sharp instincts, Wilbur was the business mind and executive of the operation, serving as president of the Wright company.

Wilbur Wright fell ill on a trip to Boston in April 1912. After being diagnosed with typhoid fever, he died on May 30, 1912, at his family home in Dayton, Ohio.

Milton Wright wrote later about his son in his diary: "A short life, full of consequences. An unfailing intellect, imperturbable temper, great self-reliance and as great modesty, seeing the right clearly, pursuing it steadfastly, he lived and died."