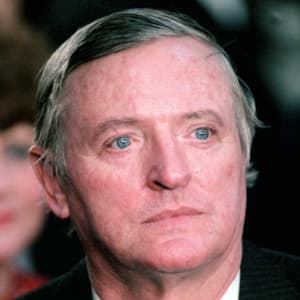 William F. Buckley was a writer and political TV personality who helped make conservative politics popular in the 1950s-1970s.

William F. Buckley founded the conservative journal National Review in 1955 and added syndicated columnist to his resume in 1962. At its height, the twice-weekly column ran in more than 300 newspapers. The magazine, columns and TV’s Firing Line all made Buckley's intellectual political writings famous. His 40 books dealt with contemporary politics, and in the 1970s he turned to writing spy novels.

Writer. William Frank Buckley Jr. was born into a wealthy Irish-Catholic family on November 24, 1925, in New York City. He was the sixth of 10 children. His father was an oil baron, with holdings in seven countries. Buckley spent his early childhood in France and England.

After briefly attending the University of Mexico, he served two years stateside in the U.S. Army during World War II. He reached the rank of second lieutenant and was a member of Franklin Roosevelt's honor guard when the president died in April 1945.

After the war, Buckley entered Yale, becoming chairman of the Yale Daily News. He also joined the secretive Skull & Bones society and was a star debater. Buckley studied political science, history and economics at Yale, graduating with honors in 1950.

His first book, God and Man at Yale (1951), condemned his alma mater for straying from its Christian roots, claiming the faculty was bent on secularism, collectivism and Keynesian economics over individualism and free market capitalism.

Buckley was recruited by the Central Intelligence Agency, serving in Mexico for nine months in 1951.

A brief stint as an associate editor for The American Mercury magazine, Buckley founded the conservative journal National Review.

"It stands athwart history, yelling Stop, at a time when no one is inclined to do so, or to have much patience with those who so urge it," read the publisher's statement in the first issue on November 19, 1955.

Buckley added syndicated columnist to his resume in 1962. At its height, the twice-weekly column ran in more than 300 newspapers.

In 1965, Buckley ran for mayor of New York on the Conservative Party ticket. He received only 13.4 percent of the vote, but the bid led to a gig as host of TV's Firing Line in 1966. The debate program, featuring a slouching Buckley carrying a clipboard, gave birth to television punditry and aired until 1999.

The magazine, columns and TV show all made Buckley's intellectual political writings famous. His personal charm, dash, wit and energy defied the traditional image of a conservative. Many credit him for popularizing conservatism in post-New Deal America, as he deftly defended its values against attacks from liberal intellectuals such as Gore Vidal.

Buckley also worked for the Information Agency Advisory 1 Commission (1969–72), and was delegate to the U.N. General Assembly (1973).

His 40 books dealt with contemporary politics, and in the 1970s he turned to writing spy novels.

Buckley married Patricia Alden Austin Taylor, the daughter of industrialist Austin C. Taylor, in 1950. She was a prominent charity fundraiser before she died in 2007.

The couple had a son, Christopher, in 1952. He is a political satirist and author of several novels, including Thank You for Smoking (1994).

Buckley died February 27, 2008, at his home in Stamford, Connecticut. The author had been ill with emphysema and diabetes. He was found dead at his desk in the study of his home by his cook. He was 82.

The conservative hero returned to the headlines in 2015 with the release of Best of Enemies, a documentary about the famed televised debates between Buckley and Vidal during the summer of 1968.