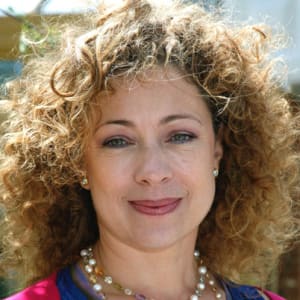 Alex Kingston is a British actress best known internationally for her role as Dr. Elizabeth Corday on the American hit TV show ER, and for playing the title role in the 1996 U.K. miniseries The Fortunes and Misfortunes of Moll Flanders.

Born just outside of London, England, in the suburban area of Surrey on March 11, 1963, Alex Kingston first tried acting at the suggestion of a teacher at Rosebery School for Girls. She went on to attend London's prestigious Royal Academy of Dramatic Arts. Her impressive body of work has spanned the theater (King Lear, See How They Run); feature films (Croupier, Essex Boys); and television (ER, Doctor Who).

Actress Alex Kingston was born Alexandra Elizabeth Kingston in Epsom, Surrey, England, to a British father and German mother, on March 11, 1963. She made her stage debut in a nativity play at age 5 and, while growing up with her two younger sisters, was encouraged to try acting as a student at the Rosebery School for Girls.

After performing in a Surrey County Youth Theatre production of Tom Jones, Kingston went on to attend the prestigious Royal Academy of Dramatic Arts, where she completed the two-year program and met her future husband, fellow actor Ralph Fiennes. She later joined the Royal Shakespeare Company.

Kingston's first professional role, at age 15, was as a bully on the hit British TV series Grange Hill. Later, she won acclaim in the title role of the miniseries The Fortunes and Misfortunes of Moll Flanders. She was also featured as Dr. Blanche Mottershead, a lesbian archaeologist, on the 2012 revival of PBS' popular Upstairs Downstairs, a precursor to the massively popular Downton Abbey.

Kingston's international visibility increased exponentially when she joined the top-rated American TV show ER, where she played the brilliant and volatile British surgeon Elizabeth Corday for seven seasons. Her signature curly red hair and throaty, aristocratic British accent have served her well, underlining her ability to play both classical stage roles and romantic parts for film and television.

The actress has a recurring role as Professor River Song on the immensely popular British TV series Doctor Who, in which she first appeared in 2008. Although she originally was slated to appear for only two episodes, the popularity of the character prompted the show's producers to bring her back. Produced by the BBC, Doctor Who is listed in Guinness World Records as the longest-running science fiction series of all time.

Kingston was married to fellow actor Ralph Fiennes, whom she divorced in 1997. She has one child, a daughter, Salome Violetta Haertel, with her second husband, German journalist Florian Haertel; the couple is separated. She lives between Los Angeles, where her daughter is in school, and England, depending upon where her work takes her.

The actress, who speaks fluent German, recently discovered her Jewish heritage while appearing on an episode of BBC's Who Do You Think You Are?.