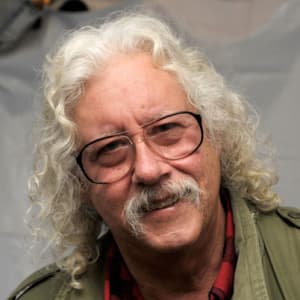 Arlo Guthrie was born on July 10, 1947, in the Coney Island section of Brooklyn, New York. The oldest son of folk pioneer Woody Guthrie, he was just 13 when he played his first public show. With hits like "Alice's Restaurant" and "Coming into Los Angeles," Guthrie, who performed at the original Woodstock Festival, became an icon of the 1960s counterculture generation.

American folk singer and icon of the 1960s, Arlo Davy Guthrie was born on July 10, 1947, in the Coney Island section of Brooklyn, New York. He was the oldest son of Woody Guthrie, a pioneering folk singer and writer, and Marjorie Greenblatt Mazia Guthrie, a well-known dancer who had toured with the legendary Martha Graham Dance Company.

Not surprisingly, Arlo was steeped in performance and song. Although his parents divorced when he was young, Arlo remained close to his father, who gave him a guitar for his sixth birthday.

Even after Woody Guthrie was diagnosed with Huntington's disease, which forced him to be permanently hospitalized in 1954, Arlo remain immersed in his father's world. Many of Woody's close friends, including Pete Seeger, Cisco Houston and Leadbelly, played an important role in Arlo's life and career.

Just as the New York City folk scene was taking off, in 1961, at age 13, Arlo played his first public show. The show didn't necessarily put Arlo on the map, but it helped pave the way for a career that would make him an icon of the 1960s and has spanned more than five decades.

By the mid-1960s, Arlo Guthrie was a fixture in the American folk scene. His famous father's legacy no doubt helped him, but Arlo quickly proved his own talent as he performed with a slew of famous musicians, including Bob Dylan, Joan Baez, Doc Watson and Bill Monroe.

During his shows, Arlo started telling a story based on events in his own life about a littering incident and being rejected by the draft board. After turning the story into an 18-minute song, he performed it to great success at the 1967 Newport Folk Festival. Soon after, Arlo inked a deal with Warner Brothers and released the album Alice's Restaurant in September 1967, just weeks after Woody Guthrie's death.

In the aftermath of his debut album, Arlo's star hardly faded. A second LP, simply called Arlo, debuted in late 1968, and a third LP, Running Down the Road, was released in 1969. That same year, Arlo played at the Woodstock Festival, performing "Coming into Los Angeles," which was featured prominently in the 1970 releases of the Woodstock movie and soundtrack. In 1972, Arlo recorded what proved to be a popular version of the song "The City of New Orleans."

While Arlo's popularity peaked in the late 1960s and early 1970s, he has continued a busy recording and performing career. His work has included a mix of original material and covers. He has also toured extensively with his father's old friend, Pete Seeger. (Pete Seeger died in 2014). In 1983, Arlo created his own recording label, Rising Son Records.

Outside the music studio, Arlo has done some occasional acting work, appearing in the ABC series Byrds of Paradise as well as the USA Network series Renegade. In 1991, Arlo purchased Trinity Church in Stockbridge, Massachusetts, the setting for the "Alice's Restaurant" story. The church is now home to the Guthrie Center, which provides a range of local and international social services, from HIV outreach to a meditation center.