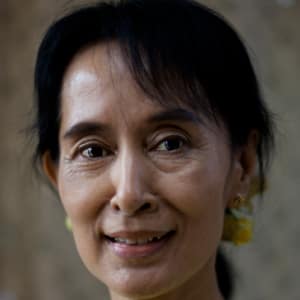 Aung San Suu Kyi is the state counsellor of Myanmar and winner of the 1991 Nobel Prize for Peace.

Who Is Aung San Suu Kyi?

Born in Yangon, Myanmar, in 1945, Aung San Suu Kyi spent much of her early adult years abroad before returning home and becoming an activist against the brutal rule of dictator U Ne Win. She was placed under house arrest in 1989 and spent 15 of the next 21 years in custody, winning the 1991 Nobel Prize for Peace along the way. Suu Kyi was finally released from house arrest in November 2010 and subsequently held a seat in parliament for the National League for Democracy (NLD) party. Following the NLD's victory in 2016 parliamentary elections, Suu Kyi became the de facto head of the country in the new role of state counsellor.

Aung San Suu Kyi was born on June 19, 1945, in Yangon, Myanmar, a country traditionally known as Burma. Her father, formerly the de facto prime minister of British Burma, was assassinated in 1947. Her mother, Khin Kyi, was appointed ambassador to India in 1960. After attending high school in India, Suu Kyi studied philosophy, politics and economics at the University of Oxford, receiving a B.A. in 1967. During that time she met Michael Aris, a British expert on Bhutanese studies, whom she married in 1972. They had two children—Alexander and Kim—and the family spent the 1970s and '80s in England, the United States and India.

In 1988, after Suu Kyi returned to Burma to care for her dying mother, her life took a dramatic turn.

In 1962, dictator U Ne Win staged a successful coup d'detat in Burma, which spurred intermittent protests over his policies during the subsequent decades. By 1988, he had resigned his post of party chairman, essentially leaving the country in the hands of a military junta, but stayed behind the scenes to orchestrate various violent responses to the continuing protests and other events.

In 1988, when Suu Kyi returned to Burma from abroad, it was amid the slaughter of protesters rallying against U Ne Win and his iron-fisted rule. She soon began speaking out publicly against him, with issues of democracy and human rights at the fore of her agenda. It did not take long for the junta to notice her efforts, and in July 1989, the military government of Burma—which was renamed the Union of Myanmar—placed Suu Kyi under house arrest, cutting off any communication with the outside world.

Though the Union military told Suu Kyi that if she agreed to leave the country, they would free her, she refused to do so, insisting that her struggle would continue until the junta released the country to a civilian government and political prisoners were freed. In 1990, an election was held, and the party with which Suu Kyi was now affiliated—the National League for Democracy—won more than 80 percent of the parliamentary seats. However, that outcome was predictably ignored by the junta; 20 years later, they formally annulled the results.

Suu Kyi was released from house arrest in July 1995, and the next year she attended the NLD party congress, under the continual harassment of the military. Three years later, she founded a representative committee and declared it the country's legitimate ruling body. In response, the junta in September 2000 once again placed her under house arrest. She was released in May 2002.

In 2003, the NLD clashed in the streets with pro-government demonstrators, and Suu Kyi was yet again arrested and placed under house confinement. Her sentence was then renewed every year, prompting the international community to call for her release.

In May 2009, just before she was set to be released from house arrest, Suu Kyi was arrested once more, this time charged with an actual crime—allowing an intruder to spend two nights at her home, a violation of her terms of house arrest. The intruder, an American named John Yettaw, had swum to her house after allegedly having a vision of an attempt on her life. He was also subsequently imprisoned, returning to the United States in August 2009.

That same year, the United Nations declared that Suu Kyi's detention was illegal under Myanmar law. In August, however, Suu Kyi went to trial and was convicted and sentenced to three years in prison. The sentence was reduced to 18 months, and she was allowed to serve it as a continuation of her house arrest.

Those within Myanmar and the concerned international community believed that the ruling was simply brought down to prevent Suu Kyi from participating in the multiparty parliamentary elections scheduled for the following year (the first since 1990). These fears were realized when a series of new election laws were put in place in March 2010: One law prohibited convicted criminals from participating in elections, and another barred anyone married to a foreign national or having children that owed allegiance to a foreign power from running for office; although Suu Kyi's husband had died in 1999, her children were both British citizens.

In support of Suu Kyi, the NLD refused to re-register the party under these new laws and was disbanded. The government parties ran virtually unopposed in the 2010 election and easily won a vast majority of legislative seats, with charges of fraud following in their wake. Suu Kyi was released from house arrest six days after the election.

In November 2011, the NLD announced that it would re-register as a political party, and in January 2012, Suu Kyi formally registered to run for a seat in parliament. On April 1, 2012, following a grueling and exhausting campaign, the NLD announced that Suu Kyi had won her election. A news broadcast on state-run MRTV confirmed her victory, and on May 2, 2012, Suu Kyi took office.

With Suu Kyi having won reelection as leader of her party in 2013, the country again held parliamentary elections on November 8, 2015, in what was viewed as the most open voting process in decades. Less than a week later, on November 13, the NLD was officially able to declare a landslide victory, having won 378 seats in a 664-seat parliament.

In early March 2016, the party selected the country's new president, Htin Kyaw, who had been a longtime adviser to Suu Kyi. He was sworn in at the end of the month. Although Suu Kyi remained constitutionally barred from the presidency, in April 2016 the position of state counsellor was created to allow her a greater role in the country's affairs. Suu Kyi has publicly stated her intention to rule "above the president" until changes to the constitution can be addressed.

In 1991, Suu Kyi was awarded the Nobel Prize for Peace. She has also received the Rafto prize (1990), the International Simón Bolívar Prize (1992) and the Jawaharlal Nehru Award (1993), among other accolades.

In December 2007, the U.S. House of Representatives voted 400–0 to award Suu Kyi the Congressional Gold Medal, and in May 2008, U.S. President George W. Bush signed the vote into law, making Suu Kyi the first person in American history to receive the prize while imprisoned.

In 2012, Suu Kyi was honored with the U.S. Holocaust Memorial Museum's Elie Wiesel Award, annually given to "internationally prominent individuals whose actions have advanced the Museum’s vision of a world where people confront hatred, prevent genocide, and promote human dignity," according to its website.

Not long after Suu Kyi's ascension to the role of state counsellor, the international community began looking into a series of escalating attacks on the Rohingya Muslims of Myanmar's coastal state of Rakhine. In October 2016, soldiers and civilian mobs banded together to terrorize and destroy Rohingya villages. A larger wave of violence erupted in August 2017, resulting in more than 600,000 Rohingya refugees fleeing across the border to Bangladesh.

Previously known for her courage in the face of military abuses, Suu Kyi now drew criticism for seemingly turning a blind eye to these atrocities. Following a November 2017 report by the U.S. Holocaust Memorial Museum and Fortify Rights, which referred to the acts of "genocide" being committed in Myanmar, U.S. Secretary of State Rex Tillerson met with Suu Kyi and publicly called for investigations into the violence.

Late in the month, the British city of Oxford, where she attended school, voted unanimously to revoke the Freedom of the City of Oxford award that was bestowed upon her in 1997, for her refusal to condemn the human rights violations occurring under her watch.

In March 2018, the U.S. Holocaust Memorial Museum followed suit by announcing it was rescinding the Elie Wiesel Award given to Suu Kyi in 2012. In a letter sent to the Burmese leader, the museum noted her failures to speak out against the brutal military campaigns that devastated the Rohingya population. The museum urged her to cooperate with international efforts "to establish the truth about the atrocities committed in Rakhine State and secure accountability for perpetrators" in her country.