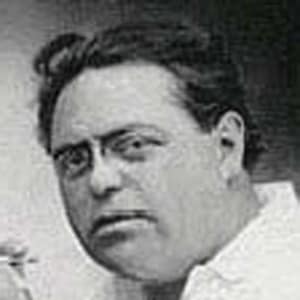 Jacques Futrelle was a journalist and mystery writer who created the character Professor Augustus S.F.X. Van Dusen, also known as “The Thinking Machine.” He died in the Titanic disaster.

Jacques Futrelle was born on April 9, 1875, in Pike County, Georgia. A journalist and writer of mystery fiction, he created the popular amateur detective Professor Augustus S.F.X. Van Dusen, nicknamed "The Thinking Machine." After traveling to Europe for a publishing deal, Futrelle and his wife booked their return trip on the RMS Titanic. Though his wife made it into a life boat after the ship struck an iceberg (on April 14, 1912), Futrelle died in the sinking, which occurred several hours later, on April 15, 1912.

Journalist, mystery writer and novelist Jacques Futrelle was born on April 9, 1875, in Pike County, Georgia. Creator of series of mystery stories featuring Professor Augustus S.F.X. Van Dusen, Jacques Futrelle had his career was cut short when the author died in the 1912 Titanic disaster.

Before the age of 20, Futrelle had met his great love and fellow writer, L. May Peel. He was working for a newspaper in Atlanta when he first encountered Peel. Soon after, Futrelle was off to Boston to join the editorial staff of a paper there. But he missed Peel too much to stay. Before taking a job with the New York Herald, Jacques and May married in Georgia in July 1895.

For a time, the couple enjoyed the New York literary life, meeting with such notable figures as Edith Wharton and O. Henry. Futrelle then moved with his wife to work for the Boston American newspaper.

In addition to his work as a journalist, Futrelle authored a number of stories and novels. His most famous work, later known as “The Problem of Cell 13,” first appeared in serial form in the American in 1905. Marking the debut of Professor Augustus S. F. X. Van Dusen, the story showed how the professor — nicknamed the “Thinking Machine” — could unravel seemingly impossible mysteries. The first Thinking Machine book, The Chase of the Golden Plate, was published the next year.

Several other Thinking Machine novels followed, including The Simple Case of Susan (1908), Elusive Isabel (1909) and The High Hand (1911). Futrelle’s stories were hugely successful in the United States and the couple had traveled to Europe in 1912 to arrange for the publication of his books there. After signing several contracts worth about $17,000, the couple wanted to return home to their two teenage children to celebrate their new success. They booked passage on the maiden voyage of the Titanic, which was supposed to be the latest and greatest in luxury ocean liners.

On the night of April 14, 1912, the Futrelles had dinner with Henry B. and Renee Harris on the ship. The Titanic hit an iceberg later that evening. As the ship began to sink, Jacques Futrelle encouraged his wife to get on one of the lifeboats. She was reluctant to leave him, but he insisted. He told her, “It’s your last chance, go,” according to an article in the New York Times. After May was forced on to a lifeboat, Jacques reportedly stood on deck with Colonel John Jacob Astor.

Futrelle, Astor and approximately 1,500 others perished when the Titanic sank into the North Atlantic early on April 15. While Futrelle was gone, his literary character lived on for a time. Two more Thinking Machine novels were published after his death — My Lady’s Garter (1912) and Blind Man’s Bluff (1914).