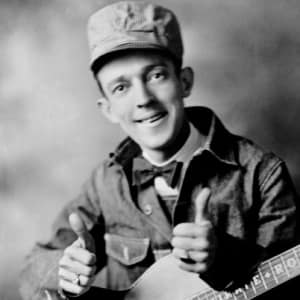 Singer and guitartist Jimmie Rodgers performed with greats such as Louis Armstrong in the early 20th century before he became known as the Father of Country Music.

Jimmie Rodgers, born in 1897 in Mississippi, was a country singer who became famous for his style of yodeling. Throughout his career, he performed several hit singles, including "Sleep, Baby, Sleep" and "Blue Yodel (T is for Texas)." He later recorded with the legendary jazz musician Louis Armstrong. He was one of the first country superstars, and is remembered as the Father of Country Music.

Singer, guitarist and Father of Country Music Jimmie Rodgers was born James Charles Rodgers on September 8, 1897, in Meridian, Mississippi. He was the youngest of three children born to Eliza and Aaron Rodgers. By the time Jimmie Rodgers was born, his mother was already suffering from a serious case of tuberculosis, and she passed away when he was only a child.

Rodgers' father worked as a maintenance foreman on the Mobile and Ohio Railroad; due to the constant travel required by his work, he was in no position to raise three young children on his own. So Jimmie Rodgers spent his formative years shuffling amongst various relatives' homes in southeastern Mississippi and southwestern Alabama. Although he was never quite the "poor orphan child" he later depicted in his songs, Rodgers' did endure an unprivileged and itinerant childhood, something that would shape his consciousness and his music for the rest of his life.

A born entertainer, Rodgers taught himself to play the guitar and—like so many great Southern singers of his and subsequent generations—learned to sing in church. After winning an amateur talent show at the age of 13, Rodgers ran away from home to try his hand at making a living with a traveling road show, using sheets he had snatched off his sister-in-law's bed as a makeshift tent. Although his father quickly tracked him down and dragged him back home, Rodgers made enough money from his shows to buy his sister-in-law a new pair of sheets.

A year later, a 14-year-old Rodgers got his first job, as a water boy for his father's railroad crew. Rodgers spent the next dozen years toiling away on the railroads, working his way up from callboy to flagman to baggage master to brakeman, all the while singing and strumming his guitar in the evenings.

In 1924, Rodgers contracted tuberculosis, the disease that had taken his mother's life, and could no longer labor long days out on the railroad. Making the best of his illness, Rodgers turned his focus to music, spending the next three years playing with amateur bar bands, earning just enough money from his music to make ends meet. In 1927, he teamed up with a string band called the Tenneva Ramblers, landing a regular but unpaid spot on a local radio station in Asheville, North Carolina. When the radio station folded, the band managed to find a new gig performing at a Blue Ridge Mountains resort.

Rodgers then got his big break when he learned that Ralph Peer, a talent scout for the Victor Talking Machine Company, was holding auditions in Bristol, Tennessee. Although their audition went over well, the night before they were scheduled to record with Peer, Rodgers and his band got into a squabble about billing, so the next morning Rodgers went in to record alone—just his voice and his guitar. Rodgers recorded two songs for Peer that day: "Sleep, Baby, Sleep" and "The Soldier's Sweetheart." The former became a surprise hit, introducing Rodgers to national audiences for the first time.

Besides giving Rodgers' his big break, Peer's 10-day stop in Bristol (known ever after in country music lore as The Bristol Sessions) also launched the career of the legendary Carter Family; many consider it the foundational moment in the history of modern country music.

In November 1927, Rodgers recorded "Blue Yodel (T is for Texas)." Based on 12-bar blues and featuring a unique yodeling chorus, the song transformed Rodgers into a national star. Over the next five years, Rodgers recorded such country music classics and forerunners of rock and roll as "Waiting for a Train," "Daddy and Home," "In the Jailhouse Now," "My Little Lady" and "Miss the Mississippi and You." However, Rodgers' most popular songs were his 12 different sequels to "Blue Yodel"—"Blue Yodel Nos. 2-13"—all of which were also based on 12-bar blues and featured Rodgers' distinctive yodeling choruses. The most famous of these sequels were "Blue Yodel No. 8 (Mule Skinner Blues)" and "Blue Yodel No. 9 (Standin' On the Corner)," both recorded in 1930 —the latter featuring the great jazz trumpeter Louis Armstrong. In 1929, Rodgers also starred in a movie called The Singing Brakeman.

By 1933, Rodgers' record sales and concert attendance were flagging due to the Great Depression, and his health was failing as his tuberculosis worsened. In May 1933, he managed to travel to New York, where he was under contract to produce a dozen more records. His recordings from that session included two hits in "Mississippi Delta Blues" and "Years Ago," but the effort it took to record these songs sapped Rodgers of what little energy he had left. Rodgers collapsed on the street on May 24 and passed away just two days later on May 26, 1933. He was only 35 years old.

Rodgers married Carrie Williamson in 1920. They had two daughters, Anita (born 1921) and June (born 1923), and remained married until Rodgers' death.

Although his recording career spanned only six years, Rodgers nevertheless had a profound impact on the development of both country music and rock and roll. Bestowed with such nicknames as the Blue Yodeler, the Singing Brakeman and the Father of Country Music, Rodgers' 110 songs about hard work, hard drinking and heartbreak set an emotional tone for country music that has remained its focus to this date.

His heavy reliance on African-American blues and jazz set a precedent that shaped the development of both country music and rock and roll over the ensuing decades. Summing up Rodgers' influence on modern music, folk legend Bob Dylan said, "Jimmie Rodgers, of course, is one of the guiding lights of the Twentieth Century, whose way with song has always been an inspiration to those of us who have followed the path. He was a performer of force without precedent with a sound as lonesome and mystical as it was dynamic. He gives hope to the vanquished and humility to the mighty."