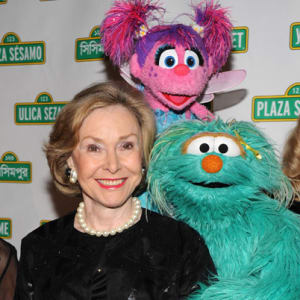 Born in 1929, Joan Ganz Cooney first created TV programming as a documentary producer for public television. Through her work, she began to think about television as a teaching medium. To this end, she founded the Children’s Television Workshop (CTW) in 1968. CTW’s first show was Sesame Street, followed in 1971 by The Electric Company. In 1989, Cooney received an Emmy Award for Lifetime Achievement and has been the recipient of countless other honors for her work.

Joan Ganz was born on November 30, 1929, in Phoenix, Arizona. She was raised in a conventional, upper-class household, and attended North High School, Dominican College and the University of Arizona. Though she was initially drawn to the world of theater, at her family's insistence she pursued a degree in education and graduated with a bachelor's degree in 1951.

After college, Ganz developed an interest in journalism and began her career in media as a newspaper reporter for the Arizona Republic. By 1954, she moved to New York City and worked as a publicist for various networks over the next decade. She got her first opportunity to create television programming as a documentary producer for public television in 1962 and won her first Emmy Award, for Poverty, Anti-Poverty, and the Poor. She married her first husband, Timothy Cooney, two years later.

How She Got to Sesame Street

While Cooney enjoyed her work, she found that she wanted to be able to make more of a difference in people's lives and began to think about the possibilities of using television as a teaching medium. After conducting a formal study on the subject, she used her findings to help convince others of television's potential for children, and—with financial assistance from the Carnegie Corporation, the U.S. Department of Education and the Ford Foundation—she established the Children's Television Workshop (CTW) in 1968. With her vision beginning to take shape, Cooney immediately set to work producing its first series, the perennial favorite Sesame Street.

Taking inspiration from the style of television commercials, the show had a quick pace intended to hold children's interest and featured a variety of educational segments in each episode. Along with its multiracial cast of actors, it also featured a number of puppet characters, known as the Muppets, which were created by the late Jim Henson. Sesame Street premiered on the Public Broadcasting System in November 1969 and has remained on the air ever since. Watched by millions around the world it is one of the best-known and best-loved children's television shows in history. During its nearly half-century run, Sesame Street has earned more than 150 Emmy Awards,

The Electric Company and More

Underlining Cooney and the CTW's commitment to educational children's television, in October 1971 The Electric Company premiered on public television. Geared toward primary school children, the show used comedy sketches, appearances from comic book heroes and a variety of other segments to teach important reading skills and featured Morgan Freeman, Rita Moreno and Bill Cosby among its original cast members. It enjoyed a successful six-season run before its eventual cancellation in 1977.

In 1990, Cooney relinquished her role as president of the CTW but has remained involved as chair of its executive committee. Now renamed the Sesame Workshop, it continues to thrive in its mission to "help kids grow smarter, stronger, and kinder." For her part, Cooney remains actively involved with the development of Sesame Street as well as the strategic planning of the organization.

For her creative vision, drive and revolutionary work in children's television programming, Cooney has been bestowed countless honors. In 1989, she received an Emmy Award for Lifetime Achievement, and in 1995 was awarded the Presidential Medal of Freedom by Bill Clinton. She was inducted into the National Women's Hall of Fame in 1998 and received a National Endowment for the Humanities Award in 2006. Cooney has also been awarded countless honorary degrees and in 2007 founded the Joan Ganz Cooney Center, a nonprofit dedicated to children's education and literacy.