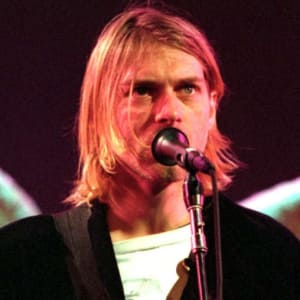 A talented yet troubled grunge performer, Kurt Cobain was the frontman for Nirvana and became a rock legend in the 1990s with albums ‘Nevermind’ and ‘In Utero.’ He committed suicide at his Seattle home in 1994.

Who Was Kurt Cobain?

Born in 1967, Kurt Cobain started the grunge band Nirvana in 1988 and made the leap to a major label in 1991, signing with Geffen Records. Cobain also began using heroin around this time. After releasing the highly successful album Nevermind, Nirvana's highly acclaimed album In Utero was released in 1993 and catapulted to the top of the music charts. On April 5, 1994, in the guest house behind his Seattle home, Cobain committed suicide.

When Was Kurt Cobain Born?

Kurt Cobain was born on February 20, 1967, in Aberdeen, Washington.

Cobain and Courtney Love had daughter Frances Bean on August 18, 1992 in Los Angeles.

Starting in 1988, Cobain's musical ambitions began moving forward. His band agreed on the name Nirvana and released their first track "Love Buzz" on a small label. Around the same time, Burckhard was replaced by Chad Channing on drums and the band was making headway in Seattle's music scene. In 1989 Nirvana released their first album, Bleach, which failed to make a big impression. What was evident, however, was Cobain's songwriting skills and what would become their hallmark blend of heavy metal and punk.

As the band forged on, 1990 became a fateful year for Cobain and the rest of Nirvana. Cobain met rocker Courtney Love at a Portland nightclub in 1990, but their romantic relationship would develop later. Nirvana also got the opportunity to tour with Sonic Youth that year and after various changes, brought in former Scream band member Dave Grohl to replace Channing on drums.

In 1991 Nirvana signed with a major label, Geffen Records, and released their second studio album, Nevermind, which henceforth, gave them their "grunge" label.

Nirvana's single "Smells Like Teen Spirit" became their biggest hit, pushing their album to no. 1 on the music charts and establishing Cobain as an exception songwriting talent of his era.

With Nirvana's popularity skyrocketing into the mainstream, Cobain was conflicted on the direction his music was going. As someone who built his artistry on anti-establishment sentiments, Cobain began feeling he was losing control of his future. He began using heroin to ease his stress and some health issues.

Before the release of Nevermind, Cobain had reconnected with Courtney Love, who was fronting the band Hole. The two dove into a whirlwind romance, and in February 1992 Cobain and Love got married and had a daughter, Frances Bean, that August.

But the relationship was built on unsteady ground, as both were heavy drug users. At one point, social services threatened to take their daughter away after Love's Vanity Fair interview came out, in which she admitted to shooting up heroin while carrying Frances. After a difficult and expensive court battle, the couple managed to keep their family intact.

But Cobain and Love also had their fair share of problems with each other. In 1993 the Seattle police had to break up a violent dispute at the couple's house. The two were fighting over Cobain's guns at the residence, which resulted in the police confiscating them, as well as arresting him for assaulting Love.

Struggles with Drugs, 'In Utero' Release

While Cobain dealt with personal struggles, professionally he was at the top of his game. In 1993 Nirvana released In Utero, which soared to no. 1 on the music charts. His deeply personal lyrics reflected his anger towards the recording industry with tracks like "Radio Friendly Unit Shifter" as well as his softer side with "Heart-Shaped Box," which is said to have been about Love.

In the fall of 1993, Cobain and the band performed for MTV's Unplugged in New York City and also toured Europe. While in Europe, Cobain took time out to spend with Love and daughter Frances, but while at his hotel in Rome, Italy, he purposely overdosed on drugs and fell into a coma. Love found him, and he was immediately taken to the hospital.

When he returned to the States, Cobain's psychological state worsened. On March 18, 1994, Love called authorities because Cobain had taken medication and locked himself in a closet with guns. When the police arrived, they determined he was not suicidal, but as a safety precaution, confiscated the medication and firearms.

Shortly after, Love pleaded with Cobain to get clean, which she was trying to do herself. He checked into a rehab clinic in L.A. but left days later.

On April 5, 1994, in the guest house behind his Seattle home, a 27-year-old Cobain committed suicide. He placed a shotgun into his mouth and fired, killing himself instantly. He left a lengthy suicide note in which he addressed his many fans as well as his wife and young daughter. While his death was officially ruled as a suicide, conspiracy theories have circulated that Love may have had something to do with his death.

Soon after Cobain's death, Nirvana released their Unplugged session, which topped album charts, and two years later, From the Muddy Banks of the Wishkah, a collection of songs that also was a commercial win for the band.

However, legal battles concerning Cobain's unreleased music began brewing between Grohl and Novoselic and Love. In 2002 the three finally found some resolution, resulting in the release of Nirvana, and later, With the Lights Out (2004) and Sliver: The Best of the Box (2005).

Kurt Donald Cobain was born on February 20, 1967, in the small logging town of Aberdeen, Washington. As a child, Cobain was artistic and had an ear for music. Although he had a younger sister Kim (b. 1971), the two were separated when their parents got divorced. At age nine, Cobain went to live with his father who eventually remarried, which put more strain on their relationship.

In the early 80s, Cobain went to live with his mother and her boyfriend who were back in Aberdeen. It was during his high school days back home that Cobain was able to demonstrate his artistic talents through his love for drawing.

When Cobain was introduced to punk rock music, a seed was planted that would forever change his life. He discovered the Melvins, a local punk rock group, and became friends with one of its members, Buzz Osbourne. It was Osbourne who exposed Cobain to more punk bands, but his newfound interest didn't take Cobain away from self-destructive habits. Throughout high school, Cobain would get deeper into the drinking and drug scene. He also was fighting with his troubled mother and didn't get along with his stepfather.

Cobain spent much of 1984 and 1985 living a nomadic life, staying with friends or sleeping in public buildings to avoid his family problems. In July 1985, Cobain was arrested for vandalizing some buildings and was later fined and given a suspended sentence. Months later, Cobain got his first band together, Fecal Matter. Despite recording some tracks, the band never went anywhere.

Eventually, Cobain began collaborating with bassist Krist Novoselic and a local drummer named Aaron Burckhard joined them. The fledgling band's first public performance was in 1987 at a house party.

Around this time, Cobain began his first serious relationship with a young woman named Tracy Marander. Despite financial restraints, the couple lived a relatively happy life in Olympia.