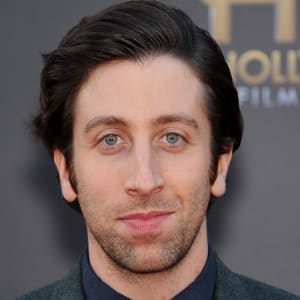 Simon Helberg is an actor and comedian who plays Howard Wolowitz on the hit sitcom ‘Big Bang Theory.’


Actor Simon Helberg started out with a few small TV roles before becoming a cast member of MADtv in 2002. He went on to guest roles on such shows as Reno 911! and Arrested Development. His next big break came with a part in Aaron Sorkin's Studio 60 on the Sunset Strip in 2006. The following year, Helberg joined the cast of Big Bang Theory as Howard Wolowitz.


Born on December 9, 1980, in Los Angeles, California, actor Simon Helberg grew up in the entertainment industry. His father Sandy is an actor and writer and his mother Harriet is a casting director. In his early years, he was very interested in television. As he told USA Today, "I would come home and make sure I finished my homework every night by 8 o'clock, generally so that I could sit down and watch TV from 8 to 10." Helberg also enjoyed more active pursuits as a child, earning a black belt in karate by the time he was 10 years old.

As a teen, Helberg became involved in playing music. He explained to Conan O'Brien that he joined a rock band because "I thought it would make me cool." But the group had one problem—only Helberg was a skilled musician. The rest of the band couldn't really play. Helberg later made the switch to acting, enrolling at the Tisch School of the Arts at New York University. By the time he graduated in 2002, he had already landed a few bit parts.


Helberg landed his first comedic role as a regular on the sketch show MADtv in 2002. He went on to make appearances on such sitcoms as Arrested Development, Joey, Reno 911! and played Alex Dwyer on the short-lived drama Studio 60 on the Sunset Strip. The show, created by Aaron Sorkin, debuted in 2006 and only lasted for one season. But this disappointment left Helberg free to tackle his most famous role to date.

In 2007, Helberg began playing aerospace engineer Howard Wolowitz on the sitcom Big Bang Theory. Howard is a friend of Leonard (Johnny Galecki) and Sheldon (Jim Parsons), two geniuses who are roommates. Kunal Nayyar plays their friend Raj and Kaley Cuoco is their neighbor Penny. This show about a group of brilliant yet socially deficient scientists quickly won over audiences.

During the show's run, viewers have watched Howard's transformation from wannabe ladies' man to husband of the equally bright Bernadette (Melissa Rauch). They also saw his character cope with the loss of his mother. Carol Ann Susi voiced Mrs. Wolowitz, who was mostly heard talking and yelling at Howard off camera. When Susi died in real life, the writers decided to have her character die on the show.


Despite the demands of being on a hit sitcom, Helberg has found time to tackle other projects. He and his wife Jocelyn Towne worked together to bring We'll Never Have Paris to the big screen in 2014. The film was based on a time in their real-life relationship when the pair broke up. Helberg also appeared with Jason Ritter in Towne's 2013 dramatic film I Am I. He has lent his voice to several animated series as well, including Kung Fu Panda: Legends of Awesomeness. In 2016 he appeared alongside Meryl Streep and Hugh Grant in Florence Foster Jenkins, for which he was nominated for a Golden Globe for his supporting role.


Helberg has been married to Jocelyn Towne since 2007. The couple have two children, daughter Adeline and son Wilder.