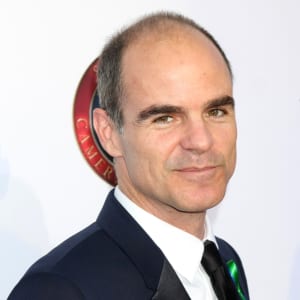 Born in Philadelphia, Pennsylvania in 1968, Michael Kelly got his first taste of acting while studying at Coastal Carolina University in South Carolina. Kelly later moved to New York City, where he landed commercial work and then film roles and TV appearances. In 2013, Kelly landed the role of political fixer Doug Stamper, in the award winning Netflix series, House of Cards.

Film and television actor Michael Joseph Kelly was born May 22, 1968, in Philadelphia, Pennsylvania. He spent the bulk of his childhood in Lawrenceville, Georgia, a suburb of Atlanta, and is one of four children raised by parents, Michael and Maureen Kelly.

After graduating Brookwood High School in Snellville, Georgia, in 1987, he enrolled at Coastal Carolina University (CCU) in South Carolina, where he planned to study law. Plans changed, however, after he took an acting class.

Kelly graduated CCU in 1992 with a bachelor's degree in dramatic arts. For a time he continued to live near Myrtle Beach, waiting tables and soaking up the beach culture as he planned his next steps in life. He kept active on the stage by working for a local children's troupe.

Longing to take a real shot at making it as an actor, Kelly eventually called a family friend in LA who knew the business and asked him for advice. Soon, Kelly had bags packed and relocated to New York with less than $500 in his pocket.

His first years in the city were modest. He lived with an old friend in the East Village and turned out for every audition he could.

"I would scour issues of 'Backstage' for auditions, send my headshot and resume with a letter," he later recalled. "I got some roles; then a casting director gave me the name of a commercial agent and I started doing commercials."

In 1998, Kelly earned his first serious recognition for playing Frankie in the Sundance Film Festival winner, River Red. Other parts soon came his way in movies like Man on the Moon (1999), starring Jim Carrey, and later Clint Eastwood's The Changeling (2008), in which he played Detective Lester Ybarra, a role he has called one of his all-time favorites.

In 2013 he played Steve Lombard in the blockbuster Superman reboot, Man of Steel. More recently he portrayed the author and mountaineer, Jon Krakauer in the 2015 film, Everest, which is based on Krakauer's 1997 true life book about a group of climbers who experience severe hardships and fatalities as they attempt to climb the famed peak.

In addition there have been TV appearances in programs such as Law and Order, The Sopranos, and CSI Miami.

"I think I'm a subtle actor," Kelly has said of his work. "I don't go big and broad. The recognition I have received is for being able to convey something through my eyes."

In 2013, Kelly landed the role of Doug Stamper in the Netflix series, House of Cards. The show stars Kevin Spacey and Robin Wright. In it, Kelly plays the calculating chief of staff to U.S. Senator and later President of the United States, Frank Underwood (Spacey).

Critics and viewers have lauded the show for its edgy look at Beltway life. Plenty of that recognition has come Kelly's way and in 2015 he was nominated for his first Emmy for Outstanding Supporting Actor.

Kelly and his wife, Karyn, have two sons, Clinton and Frankie. The family lives in New York City.