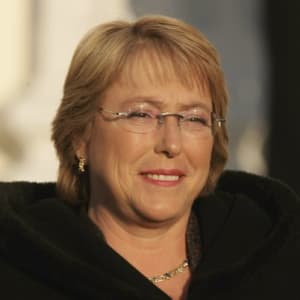 Michelle Bachelet was the first female president of Chile who served from 2006–2010.

Michelle Bachelet was born on September 29, 1951 in Santiago, Chile. Her father was arrested by Pinochet and died under torture. Michelle, a medical student, was also tortured but released into exile in 1975. Bachelet returned to Chile and entered politics after Pinochet was ousted. In 2006 she became Chile's first woman president and was popular for her deft handling of the 2008 financial crisis.