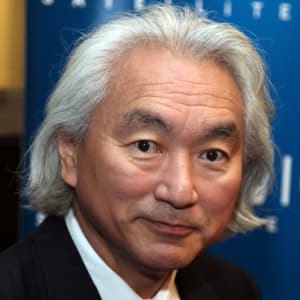 Michio Kaku is a well-known physicist and one of the co-founders of string field theory.

Born on January 24, 1947, in San Jose, California, physicist Michio Kaku studied at Harvard University and later the University of California, Berkeley, before starting his long teaching tenure at the City College of New York. The co-founder of string field theory, Kaku is the author of several popular books and has appeared on numerous television programs.

Physicist Michio Kaku was born on January 24, 1947, in San Jose, California. His parents were both of Tibetan descent, and his grandfather immigrated to the United States for work in the cleanup efforts following the devastating 1906 earthquake in San Francisco.

Kaku first became attracted to science as a young child, and while a student at Cubberly High School in Palo Alto, he famously built an atom smasher in his parents' garage.

Kaku eventually landed at Harvard University, where he graduated first in his physics class in 1968. From there it was on to the University of California at Berkeley, where he worked at the Berkeley Radiation Lab and earned his Ph.D. in 1972.

The following year Kaku lectured at Princeton, but not long after, the Army drafted him. He was trained as an infantryman but spared combat when the Vietnam War ended shortly before he was scheduled for deployment.

Since completing his own education, Kaku has spent the majority of his career teaching at the City College of New York, where he holds the Henry Semat Chair and Professorship in theoretical physics.

Much of Kaku's work has been devoted to a search for a single unifying theory that can unite Albert Einstein's earlier findings with quantum physics. His most notable contribution has been as one of the co-founders of string field theory, a branch of string theory.

As part of his work and research, Kaku has authored more than 70 scientific articles as well as several books. In his published work, Kaku has gone to great lengths to make physics more accessible to non-scientists. His first book, Hyperspace, published in 1994, was a New York Times bestseller and one of the top-selling science books of the year.

Kaku's efforts to popularize science have made him something of of celebrity. Over the years, he's appeared regularly on the BBC, Discovery, CNN and the History Channel, among others. In addition, Kaku hosts the radio programs "Science Fantastic" and "Explorations in Science with Dr. Michio Kaku."

With his wife, Shizue, he is the father of two daughters. The family resides in New York City.