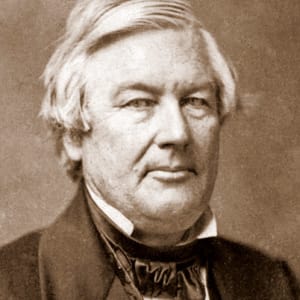 Millard Fillmore is best known for assuming the presidency after the death of Zachary Taylor, becoming the 13th U.S. president.

Millard Fillmore was born in New York on January 7, 1800. Fillmore began his political career in the anti-Masonic party, but switched to the Whig Party through his association with Henry Clay. He became vice president under President Zachary Taylor, assuming the presidency after Taylor's death in 1850. As the 13th U.S. president, Fillmore was responsible for forcing open Japan to trade with the Treaty of Kanagawa.

Millard Fillmore was born in extreme poverty in a log cabin on January 7, 1800, in Locke Township, New York. At age 15, he was apprenticed to a cloth maker by his father to keep the family solvent. After nearly two years of brutal apprenticeship, Fillmore left and moved to New Hope, New York. Around this time, he became obsessed with educating himself, stealing books when he could. He attended New Hope Academy, where he met his future wife, Abigail Powers, who was teaching the class. The couple wed in 1826.

In 1819, Millard Fillmore got a job as a clerk with a local judge, and was admitted to the New York bar in 1823. Fillmore joined the Anti-Masonic Party as a young lawyer, and his political career subsequently began. In 1828, he ran for the New York State Assembly and won, serving three terms before being elected to the U.S. House of Representatives in 1832. During this time, Fillmore supported the protective tariff and eliminating the slave trade between the states. He eventually joined the Whig Party through his association with party boss Thurlow Weed, who would later help Abraham Lincoln become president.

In 1843, Millard Fillmore attempted to strengthen his position in New York: He resigned from the House, thereafter making an unsuccessful run for the New York governorship. In 1846, he helped establish the University at Buffalo and served as its first chancellor. In 1847, Fillmore was elected to the prestigious position of New York comptroller, or chief financial officer, revising New York's banking system. In 1848, the Whig Party tapped Fillmore to run as vice president with presidential candidate Zachary Taylor, a southerner.

Zachary Taylor and Milliard Fillmore won a bitterly fought election, but could not have been more different in backgrounds and political positions. The two did not even meet until after the election, and, when they did finally meet, they didn't hit it off well. As a result, Fillmore was excluded from any major role and relegated to being president of the Senate, which was beginning to debate several bills addressing the issue of slavery.

President of the United States

The sudden death of President Zachary Taylor in July 1850 brought a political shift to the administration. Taylor's entire cabinet resigned, and Millard Fillmore sided with Democratic Senator Stephen Douglas for a series of bills that would become the Compromise of 1850. While the Compromise of 1850 passed and was signed by Fillmore, it turned out to only prolong the split in the Union.

In foreign policy, President Millard Fillmore dispatched Commodore Perry to "open" Japan to western trade and worked to keep the Hawaiian Islands out of European hands. He also refused to back an invasion of Cuba by adventurous Southerners who wanted to expand slavery into the Caribbean. For this and his support of the Fugitive Slave Act, he was unpopular by many, and was subsequently passed over for re-nomination by the Whig Party in 1852.

As the Whig Party disintegrated, Millard Fillmore refused to join the emerging Republican Party. Instead, he ran for the presidency as a member of the American Party, which was affiliated with the Know-Nothing movement. Officially retired from politics, he criticized President James Buchanan for not taking immediate action when South Carolina seceded from the Union in 1860, but opposed President Lincoln's unconditional policies toward the South during the Civil War. He later supported President Andrew Johnson's more conciliatory approach during Reconstruction.

He returned to Buffalo, New York, where he died on March 8, 1874, from the after effects of a stroke.