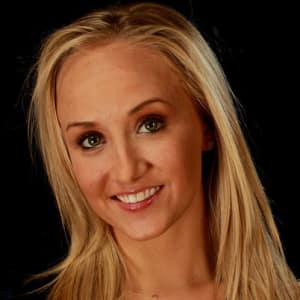 Anastasia Valeryevna Liukin, better known as Nastia Liukin, is a world-renowned gymnast and Olympian who was named the Olympic individual all-around Champion in 2008.

Born in Moscow, Russia and raised in Parker, Texas, Nastia Liukin was named the 2008 Olympic all-around champion, and won the title of World Champion in both the 2005 and 2007 World Artistic Gymnastics Championships for her artistry on the balance beam.

The sole daughter of two champion gymnasts, Anastasia "Nastia" Liukin was born on October 30, 1989 in Moscow, Russia, in the former Soviet Union. Her family moved to Parker, Texas when she was 2 years old, and by her third birthday, young Nastia was already beginning to demonstrate a natural aptitude for gymanstics.

From the beginning, Liukin was taught and influenced by her parents. Her father and coach, Valeri, is a former Olympian celebrated as the first gymnast to perform a triple back flip on floor exercise. Her mother, Anna Kotchneva, was a world champion in rhythmic gymnastics in the late 1980s.

Nastia's career took off in the early 2000s. She first competed on the national stage in 2002, placing 15th in the National Championships. Despite her shaky start, by 2004, she was widely recognized as one of the foremost junior gymnasts in the country and was a member of the U.S. team that took gold at the 2003 Pan Am Games.

In 2005 and 2007, Liukin was named the world champion on the balance beam, and gained a world title in 2005 on the uneven bars. Often donning her signature pink leotard, she earned international acclaim for her technical precision and artistry as a gymnast.

In 2008, Liukin qualified for the Summer Olympics in Beijing, China, and made it to the final rounds of three events: the balance beam, uneven bars and floor exercise. After winning three silver medals (team, balance beam and uneven bars) and a bronze medal (floor exercise) in Beijing, she received one of her most significant honors: the 2008 Olympics' all-around gold medal.

Liukin's talent and natural beauty won her major international recognition as an athlete and celebrity in 2008, leading to a commercial campaign for Adidas and several cameo appearances on American television shows, including of an episode of Gossip Girl in 2008 and The Biggest Loser in 2010.

Although Nastia enrolled in Southern Methodist University in 2008, she withdrew the next year due to conflicts with her training schedule. She has spoken publically about her desire to return to college once she has finished competing.