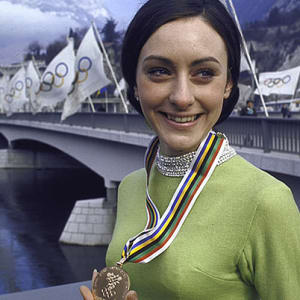 Who Is Peggy Fleming?

Born in 1948 in California, Peggy Fleming started figure skating at age 9. Soon the hobby blossomed into an amateur career and Fleming won several accolades for the sport, including U.S. titles and world championships. She then participated in the 1968 Olympics, where she won the only gold medal for the United States.

Thirty years later, Fleming was diagnosed with breast cancer. After going through surgery and chemotherapy, she successfully conquered her cancer.

Figure skater, Olympic athlete and philanthropist Peggy Gale Fleming was born on July 27, 1948, in San Jose, California. Before Dorothy Hamill and Michelle Kwan, Peggy Fleming was seen as one of the best American figure skaters.

She began skating at age 9, and her family made several sacrifices to support the young athlete's amateur career. When she was 12, her coach was among those killed when a plane carrying the United States figure skating team crashed in Belgium.

In 1968, Peggy Fleming won gold at the 1968 Olympics in Grenoble, France. Her gold medal  was the only one achieved by the U.S. that year. The victory was also particularly sweet because it signaled a resurgence in U.S. figure skating following the 1961 airplane tragedy.

After winning her Olympic gold, Fleming starred in several television specials, including Fantasy Island, The Magic of David Copperfield VII: Familares and Nutcracker on Ice, and performed in countless skating shows across the U.S.

In 1998, Fleming was diagnosed with breast cancer. She had surgery to remove a malignant tumor on the 30th anniversary of her famous Olympic win. After completing radiation therapy, Fleming was cancer-free.

She shared her battle with breast cancer with the public, appearing on such television shows such as The Rosie O'Donnell Show. Since her diagnosis, Fleming has been a tireless champion for health-related causes.

Fleming and her husband live near Los Gatos, California, and have two sons, Andy and Todd, and three grandchildren.