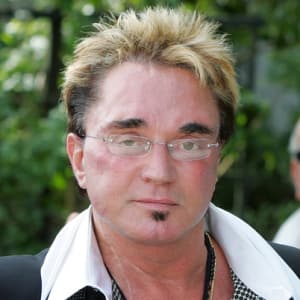 Roy Horn is half of the headlining Las Vegas magical duo Siegfried & Roy who survived severe injuries after an onstage tiger attack.

Roy Horn was born on October 3, 1944, in Nordenham, Germany. Horn joined Siegfried Fischbacher to become the magical act Siegfried & Roy, putting on headlining Las Vegas shows for almost three decades. In 2003, Horn was mauled onstage by one of the tigers used in the act and suffered major injuries. He has since recuperated and retired, and the duo reunited for a final appearance in 2009.

Animal trainer and stage performer Roy Horn was born on October 3, 1944, in Nordenham, Germany. The youngest of four sons, his father was an orchestra leader who went on to fight at the front during World War II. His parents divorced after World War II and his mother remarried. As a young boy, Horn spent much of his time with a beloved half-dog, half-wolf named Hexe, an animal whom Horn claimed once saved his life. As a young child, Horn often found solace at the Bremen Zoo. It was there he befriended a two-year-old cheetah. Because the zoo's founder was a family friend of his mother and after months of communicating with the animal through its cage, he gained permission to feed him and take him for walks. He went on to help care for the zoo's exotic animals. “My aunt and uncle knew of my love for animals, and for a birthday present arranged for me to have unlimited access to the zoo and the library," Horn said on his official web site. "From the time I was about ten, I went there every chance I could.”

In 1957, while working as a waiter on an ocean liner, Horn met Siegfried Fischbacher, who was working as a steward while performing magic tricks on the side. Horn volunteered to be Siegfried's assistant and soon the pair was collaborating, upping the ante from making a rabbit disappear to vanishing a cheetah. For the next five years, they performed throughout Europe, playing for little money. They eventually received their big break while performing at a casino in Monte Carlo, where a scout spotted them and invited them to do their act in Las Vegas.

Siegfried and Roy have been combining magic tricks with tiger stunts in Las Vegas for more than 30 years, at first with shared billing and eventually as their own show. In addition to their hugely popular performances, they are active preservationists of rare white tigers and white lions. The duo has created a special compound outside of Las Vegas for the birthing, care and conservation of these animals.

In October 2003, the show was brought to its knees when a white tiger brutally attacked Horn during a performance, leaving the trainer in critical condition. The show was closed down indefinitely following the incident. A year later, Horn remained partially paralyzed, but continued to insist that the animal was not at fault. He claimed that he fainted on stage and that the 380-pound tiger was only trying to help him by dragging him off stage. By September 2005, Horn was walking on his own, a recovery many called miraculous.